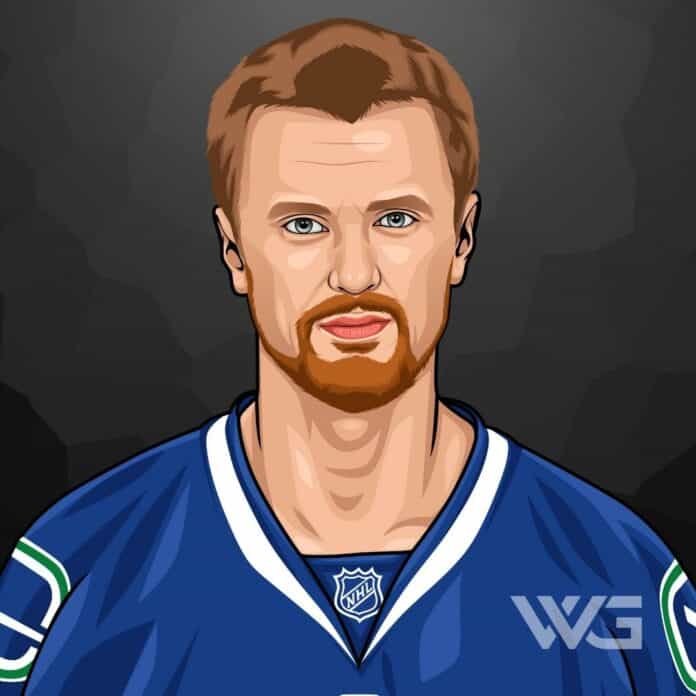 What is Henrik Sedin’s net worth?

Henrik Sedin is a Swedish professional ice hockey player best known for his long run with the Vancouver Canucks.

In addition to playing in the National Hockey League, he’s represented his country at the Olympic Games, winning a gold medal in 2006.

As of November 2022, Henrik Sedin’s net worth is estimated to be $40 Million.

Henrik Lars Sedin was born 16 September, 1980, in Örnsköldsvik, Sweden, six minutes before the birth of his identical twin, Daniel Sedin.

Raised with his older brothers Stefan and Peter, Henrik’s father, Tommy, played for Modo Hockey in the 1960s.

Along with his brother Daniel, Henrik began playing organized hockey when he was eight years old, attending the high school at Nolaskolan Gymnasium.

Henrik Sedin began his professional ice hockey career in 1997, playing for Modo Hockey in the Swedish Hockey league until 2000.

His transition to the National Hockey League to play with the Vancouver Canucks took his career to the next level, with the player improving quickly over the following years.

By 2005, Henrik and his brother Daniel were leading the team in goal-scoring, with Henrik a single point behind Alexander Ovechkin for the NHL scoring lead.

He continued to set records in the following seasons, surpassing Pavel Bure’s record points in a single season, scoring 112 compared to Bure’s 110 points.

In 2012, he became the fifth player in history to lead the league for three consecutive seasons, following in the footsteps of Wayne Gretzky, Bobby Orr, and Joe Thornton.

Sedin’s impact on the Vancouver Canucks’ impressive record has secured his legacy as a professional ice hockey player and made him one of the greatest Swedish players of all time.

Henrik Sedin’s career earnings reflect his ongoing commitment to the Vancouver Canucks over many seasons and his lucrative contracts with the team.

In addition to his salary’s millions of dollars per year, he’s drawn additional income through brand endorsement deals.

While Sedin retired as a professional ice hockey player, his ongoing work in player development ensures his salary will continue to remain high.

As one of the richest hockey players in the world, Henrik Sedin’s net worth has increased over the years as he’s helped his teams win many cups and championships.

The biggest growth in his net worth began in 2000 with his move to the Vancouver Canucks, with large contracts securing the increase in his overall wealth.

As a player developer and advisor to the world’s leading hockey teams, Sedin’s net worth is unlikely to diminish any time soon.

Sedin lives with his family in Vancouver’s Yaletown neighborhood, returning to spend time in Sweden during the off-season.

He maintains a social media presence through his official Twitter account, posting updates on hockey news and events.

Throughout his career, Henrik Sedin has picked up many awards and trophies through his involvement with the Vancouver Canucks and the Swedish national team.

He has also earned recognition for his individual performances as the team’s highest point-scorer and most valuable player.

Here are some examples of awards and trophies from Henrik Sedin’s career:

While his retirement from playing professional ice hockey means his list of trophy wins will remain the same, we can expect Sedin to be inducted into the hall of fame some time in the future.

How Does Henrik Sedin Spend His Money?

While Henrik Sedin’s net worth might not match that of the richest athletes in the world, his fortunes still allow him to enjoy a luxurious lifestyle.

Along with his wife, Henrik has invested money in premium racing horses, with their horse Nahar winning the 2013 Elitoppet.

They own a large house in Vancouver, making the news in 2017 when Henrik surprised his new neighbors with a Henrik Sedin Russian matryoshka doll.

Sedin’s prolific career in ice hockey has seen him experience many successes and notable high points.

He’s helped his teams win several crucial league games and trophies, honing his skills and becoming one of the greatest players in the National Hockey League.

Here are some of the best highlights of Henrik Sedin’s career:

As he continues his career coaching and training up-and-coming ice hockey players, his legacy on the sport will undoubtedly continue to grow.

With his long-running participation with the Vancouver Canucks and his work as an advisor, Henrik Sedin has plenty to say about ice hockey.

He’s spoken of his personal experiences in interviews, sharing his thoughts on the pressures of the sport and how the team prepares for a game.

Here are our favorite quotes from Henrik Sedin:

Now that you know all about Henrik Sedin’s net worth let’s see what life lessons we can learn from his experiences.

Sedin’s commitment to intense training and honing his skills can inspire anyone looking to excel in sports or business.

Here are some of the best success lessons to learn from Henrik Sedin:

1. Take The Time To Recover From Injuries

Anyone who plays regular sports knows how frustrating it can be to suffer an injury and face being sidelined from the team.

Sedin’s personal experiences with injuries shows the importance of taking the time to recover to avoid making these injuries even worse.

2. Learn From Your Family

Henrik Sedin’s rise to ice hockey fame and fortune came largely thanks to the encouragement and training of his father and brother.

If you have family members willing to help you succeed, embrace the opportunity to learn and grow.

While Sedin has won many accolades for his individual achievements, he’s ultimately a team player who respects the collaborative process of ice hockey.

If you don’t learn how to work well with others, you’ll only get so far in life.

That concludes this article exploring the career and net worth of professional ice hockey player Henrik Sedin.

One of the most successful players with the Vancouver Canucks, his legacy on the international stage was secured through his Olympic Games victory.

With Sedin’s ongoing work as a coach and developer, his net worth is likely to continue to grow, so be sure to check back on this article for the latest updates and information.

As of November 2022, Henrik Sedin’s net worth is estimated to be $40 Million.

What do you think about Henrik Sedin’s net worth? Leave a comment below.