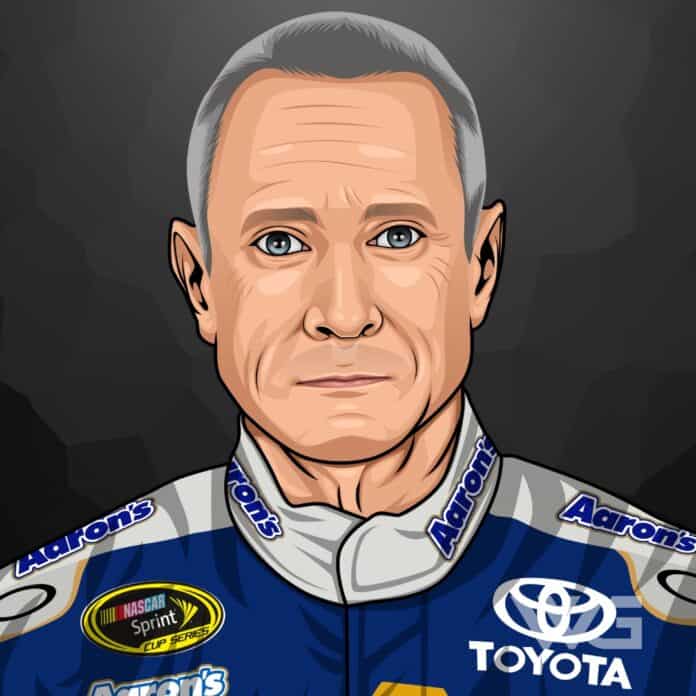 What is Mark Martin’s net worth?

Mark Martin is an American stock car driver who has earned 40 Cup Series wins and is often described as the best driver to never have won a championship.

Although he retired in 2014, Martin continues to grow his fortune as the owner of numerous automobile dealerships and a driver development coach.

Mark Anthony Martin was born January 9, 1959, in Batesville, Arkansas, and he began racing on dirt tracks around his hometown.

While little else is known about his childhood, it is obvious that racing is something he has been passionate about for a long time.

It also seems that his parents supported his dreams, as when he started racing officially in 1974, he did so in a car that was built and sponsored by his father.

After making a name for himself in the ASA, Martin joined NASCAR in 1981, though his start was anything but smooth.

From 1981 to 1987, Mark Martin drove for six different teams, and while he earned a few pole positions, the first team he was with, owned by Bud Reeder, had trouble clinching titles.

Despite this, Martin was able to persevere, and by 1988, he joined Roush Racing and started picking up steam, winning his first Winston Cup race in 1989.

With Roush racing, Martin was about to win 35 career NASCAR Cup Series races, and while he decided to cut back on full-time racing in the series in 2005, he finished out the season, dubbing it the “Salute to your” tour.

Martin joined Ginn Racing in 2007 and finished second at the Daytona 500, only 0.020 seconds behind Kevin Harvick.

The same year Martin chose not to compete in the Food City 500, becoming the first points leader since Cale Yarborough to sit out a race.

Following that season, Martin joined Dale Earnhardt, Inc after it bought out Ginn Racing, but left in 2009 to compete for Hendrick Motorsports, becoming the fourth driver to win a Cup race after turning 50.

Martin continued racing for Hendrick until 2012 when he moved to Michael Waltrip Racing, and the next year he finished third at the Daytona 500.

In 2013 Martin raced for Stewart-Haas Racing, but after a shakey first season, Martin announced he wouldn’t compete in 2014, though he didn’t officially announce his retirement until February 2015.

Mark Martin has earned a substantial amount throughout his career, and although he is no longer one of the richest racing drivers in the world, his earnings are still substantial.

While we can’t cover everything he has earned during his long career in NASCAR, we can highlight some of his most significant gains.

Despite not having the exuberant wealth of his fellow racer Michael Schumacher, Mark Martin has done very well for himself during his decades-long career behind the wheel.

Mark Martin married his wife Arlene in 1984, and together they have five children, four of which are from his wife’s first marriage.

With his wife, Martin currently lives in Daytona Beach, Florida, and has previously lived in Jamestown, North Carolina.

Since leaving the racing circuit, Martin has become the owner of five car dealerships in Arkansas for brands including Hyundai Motors, General Motors, Ford Motor Company, and Fiat.

Martin and his wife spend a lot of time on the road in some of the most expensive RVs in the world, and he also enjoys listening to rap music, saying that Gucci Mane is his favorite artist.

Mark Martin has won numerous awards throughout his career, even if he’s never won a championship.

Although all of his accolades are noteworthy, some have been more significant than others.

Here are some of Mark Martin’s most important career awards:

Martin may not be as universally known as Dale Earnhardt Jr, but he has certainly earned his fair share of prestigious awards.

How Does Mark Martin Spend His Money?

In 2016, Mark Martin put his lakeside North Carolina mansion up for sale with an asking price of $2.55 million, after having bought the home in 2012 for $2 million.

Originally built in 1994, this 5,767 sqft home was designed to stand out on Lake Norman’s shoreline, and almost every room has windows that provide a lakeside view.

The home also boasts a huge kitchen, a luxury dining room, and a huge living area with towering ceilings, built-in bookcases, and a two-story fireplace.

On the lower-level of the home there is also a climate-controlled four-car garage, a library, a wet bar, and a large entertainment space.

It even comes with its own private dock on the lake and two patios that allow for stunning views of the lake from either the first or second floors.

Mark Martin has reached many important milestones during his racing career, and each has helped cement his place as a stock car legend.

However, some of the highest points in his career are the ones that had the greatest impact on his fame and fortune.

Here are some of the best highlights of Mark Martin’s career:

Although these are just a few of his many greatest achievements, these highlights have been some of his most exceptional moments.

Mark Martin has been an inspiration to aspiring drivers and fans alike, and despite his resounding success, he has remained humble and down-to-earth.

In a way, it makes sense that he’s since gone on to be a development coach, because he certainly knows what to say to keep people motivated.

Here are our favorite quotes from Mark Martin:

We can learn a lot from Mark Martin and his long career as a professional race car driver.

Now that you know all about Mark Martin’s net worth, we can take a closer look at what he can teach us about finding success in our own lives.

Here are some of the best success lessons to learn from Mark Martin:

Networking is invaluable if you are trying to become successful; without it, you could risk losing access to important opportunities.

Whenever possible, look for ways to build bridges with the people around you, and only demolish them if absolutely necessary, because you never know when a connection could be useful.

You can never expect success to happen; all you can do is give 100% and work as hard as possible to try and bring it to fruition.

No one is going to reach your goals for you, so always demand your best, no matter what you are doing.

3. Know When To Ask For Help

Asking for help is something many people struggle with, but it is one of the best things a successful person can do.

Don’t be afraid to ask for assistance when you need it because, ultimately, it can only help you learn new skills and prevent unnecessary setbacks.

Mark Martin is one of the most celebrated stock car drivers in history, and his long career behind the wheel has earned him a substantial net worth.

While he no longer competes, his wealth continues to grow via his extensive business ventures, ensuring that he will only continue to become more affluent.

Make sure to check back often so that you don’t miss any updates impacting Mark Martin’s fortune.

What do you think about Mark Martin’s net worth? Leave a comment below.