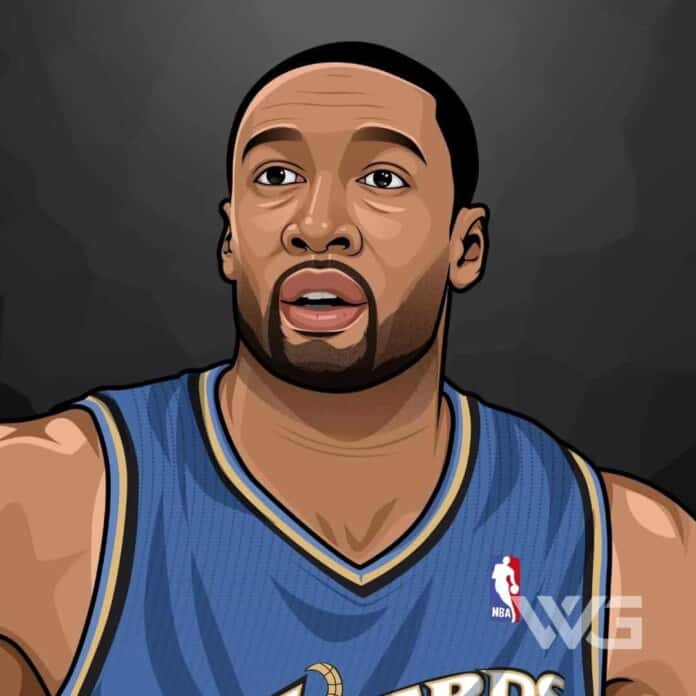 What is Gilbert Arenas’ net worth?

Arenas attended Grant High School. In 2001, he was drafted by the Golden State Warriors with the 31st overall pick in the NBA draft.

He is a three-time NBA All-Star, a three-time member of the All-NBA Team, and was voted the NBA Most Improved Player in the 2002 – 03 season.

Arenas were raised in the San Fernando Valley section of Los Angeles, where he played basketball.

Arenas played basketball at the University of Arizona. One of his teammates, Richard Jefferson, would later join him in entering the 2001 NBA draft. In 2001, Arenas’s sophomore year, he helped lead Arizona to the national championship game.

Gilbert was picked 31st overall by the Golden State Warriors during the 2001 NBA Draft.

He made a strong impact winning the NBA Most Improved Player Award during the 2002-2003 season.

He became a free agent and was signed by the Washington Wizards. During his time with the Wizards, Gilbert became known for his steals and strong technical abilities. He was also known for his late-game “buzzer-beater” shots.

He earned $160 million in salary plus tens of millions more from endorsements. Gilbert has endorsed a number of brands over the course of his career, but his most notable partnership is perhaps Adidas.

Arenas later dropped his own line of Adidas TS Lightswitch shoes. However, his partnership with Adidas came to an end after his 2009 gun incident.

How Does Gilbert Arenas Spend His Money?

Arenas own a $3.1 million home in Encino.

Here are some of the best highlights of Gilbert Arenas’ career:

“When I hear about people murdering, I wonder, ‘What has to go through your brain to say, I don’t want him breathing anymore? What makes you get that angry? How can you take someone’s breath away? That blows my mind.'” – Gilbert Arenas

“The thing that happened in Washington — it happened. All you can do is grow from it. That took a toll on me. That was probably — I think if I could’ve bounced mentally out of that situation faster than I did, I would probably still be in the NBA. But since I couldn’t understand why they were trying to treat me like that, I basically gave up. I didn’t want to be a part of it anymore.” – Gilbert Arenas

“When I leave the NBA, I don’t want my legacy to be, ‘He won a championship ring.’ I want my legacy to say: ‘He played for the people. He gave everybody in the world hope that they can be just like him.” – Gilbert Arenas

“If you take away the last few years, from my last year in Washington, and you think about my career, there was nothing but hard work. I was in the gym three or four times a day, working on my skills. If we lost a game, and I thought I played bad, I’m staying in the gym to keep shooting. That’s what I did. That’s what I was known for: I was a gym rat.” – Gilbert Arenas

Now that you know all about Gilbert Arenas’ net worth and how he achieved success; let’s take a look at some of the lessons we can learn from him:

We’re humans. We live on land. Sharks live in water. So if you’re swimming in the water and a shark bites you, that’s called trespassing.

Arenas know that if he and his team play their game and execute they will succeed.

How much is Gilbert Arenas worth?

Gilbert Arenas’ net worth is estimated to be $20 Million.

How old is Gilbert Arenas?

How tall is Gilbert Arenas?

Arenas are best known for his seasons with the Washington Wizards, although he initially started his NBA career with the Golden State Warriors. He is known as “Agent Zero”. His name is also a reference to his late-game shots.

What do you think about Gilbert Arenas’ net worth? Leave a comment below.