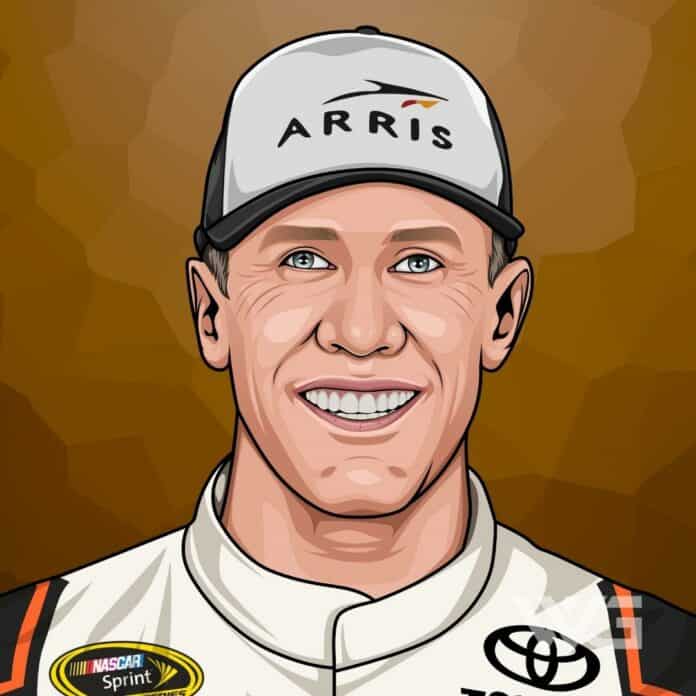 What is Carl Edwards’ net worth?

Carl Edwards is one of the most successful drivers in NASCAR, and he’s won numerous races behind the wheel.

While he has since retired to spend more time with his family, he has earned himself a significant fortune to live comfortably.

Carl Michael Edwards II was born on August 15th, 1979, in Columbia, Missouri, where he spent his entire childhood.

Edwards attended Rock Bridge High School and graduated in 1997, and though he didn’t plan on attending college, after qualifying for state assistance, he enrolled at the University of Missouri.

After spending three semesters studying engineering, Edwards decided to drop out and pursue a career in racing, sometimes serving as a substitute teacher while he made a name for himself behind the wheel.

Edward got his big break in 2002 when he got the chance to compete in the NASCAR Craftsman Truck Series.

In 2003, Edwards became a full-time competitor for Roush Racing, earning Rookie of the Year honors for his impressive skills on the track.

Eventually, Edwards joined the Nextel Cup Series and Busch Series as a full-time driver and made history by winning the Aaron’s 312 and the Golden Corral 500 back to back in two days.

Until Edwards, no other driver had won Busch and Nextel series races on the same weekend in Atlanta, and since then, no one else has repeated this feat.

Starting in 2012, Edwards began focusing more on the NASCAR Sprint Cup Series, where he did very well for himself until his retirement.

Carl Edwards may fall just short of being one of the richest racing drivers in the world, but he has still racked up an impressive net worth.

Although we don’t know everything about his earnings, we do have some information about what he earned from specific races.

While he may not be as wealthy as Lewis Hamilton or Michael Schumacher, there is no denying that Edwards has made a significant fortune throughout his time as a professional race car driver.

Edwards married Katherine Downey in 2009, and the couple has two children, Anne and Michael Edwards.

After retiring from racing, Edwards was rumored to be considering a career in politics, potentially running against Claire McCaskill for her U.S. Senate seat in 2018.

However, while Edwards decided not to run then, he has reportedly thought about becoming a nominee for the open Senate seat in 2022, though no further updates have come forward.

Carl Edwards has experienced many victories throughout his career in NASCAR, and it has helped him acquire his impressive fortune.

However, some of his wins have been more significant than others and helped him become one of the leading drivers in racing.

Here are some of the most important victories of Carl Edwards’ career:

Carl Edwards has won many races throughout his career, but these are by far his most significant.

How Does Carl Edwards Spend His Money?

Since retiring, Carl Edwards has enjoyed living a life under the radar, and because of this, not much is known about how the former professional stock car racing driver spends his money.

We do know that, in 2017, he moved back to his hometown of Columbia, Missouri, and has focused on spending time with his family and farming.

Previously, Edwards had lived in Concord City, North Carolina, where he lived in a modest 3,772 sqft home that he bought for around $941k.

While we don’t know how much his home in Missouri costs, we’ll bet it at least has a large garage where Edwards may be hiding some of the most expensive Ferraris in the world for some weekend joy rides.

Carl Edwards has reached many milestones throughout his impressive NASCAR career.

However, some of his successes have stood out more than others.

Here are some of the best highlights of Carl Edwards’ career:

While he may not be as well-known as Danica Patrick or Jeff Gordon, Carl Edwards has done very well for himself throughout his career behind the wheel.

Carl Edwards hasn’t given a lot of interviews over the course of his career, but the ones he has done give fans a unique look into how he approaches races.

As it turns out, Edwards can even be very inspirational when he wants to be!

Here are our favorite quotes from Carl Edwards:

There are a lot of great lessons we can learn from Carl Edwards’ career.

Now that you know all about Carl Edwards’ net worth, let’s look more closely at what he can teach us about reaching our own goals.

Here are some of the best success lessons to learn from Carl Edwards:

Sometimes it can be hard to stay positive when things go wrong, or you’re not achieving your goals quickly enough.

But holding on to the hope that you will one day succeed is one of the most important things you can do to keep yourself motivated.

2. Anything Worth Doing Is Never Easy

Nothing worthwhile comes easy, and finding success will take a lot of hard work and possibly some sleepless nights.

However, once you achieve your goals, all of the struggles will be well worth it!

It can be tempting to take on as much as possible and push yourself to the absolute limits, but this can also cause you to burn out very quickly.

While pushing yourself can be important, so is knowing your limits and how much you can take on at once.

Carl Edwards is one of the most successful drivers in NASCAR, and he’s earned a huge net worth for his skills behind the wheel.

While he has since retired from the circuit, he has made more than enough money to live comfortably for the rest of his life.

However, you never know when he might get back on track, so make sure to check back often to stay up-to-date on Carl Edwards’ net worth!

What do you think about Carl Edwards’ net worth? Leave a comment below.