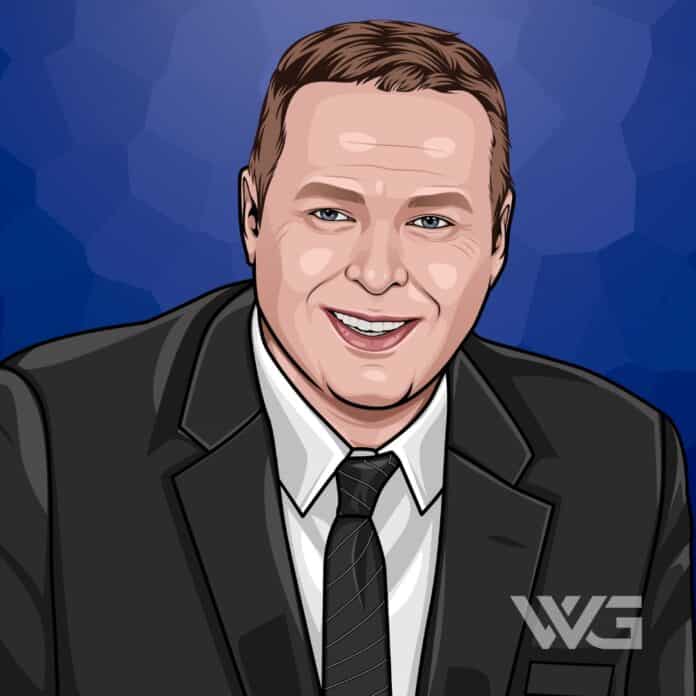 What is Martin Brodeur’s net worth?

Martin Pierre Brodeur is a Canadian-American former NHL goaltender who has set numerous records during his career.

Although he retired in 2015, Brodeur continues to grow his fortune as an advisor to the New Jersey Devils.

As of November 2022, Martin Brodeur’s net worth is estimated to be $55 Million.

Martin Pierre Brodeur was born May 6, 1972, in Montreal, Quebec, Canada, one of five children born to Mirelle and Denis Brodeur.

His father had previously played in the 1956 Olympics for Canada’s hockey team, where he won a bronze medal, and Martin often went with his father to Montreal Canadiens games.

In 1989, Martin started playing for the Quebec Major Junior League and made it to the QMJHL All-Rookie team.

Following his impressive performance in the Junior League in 1990, Brodeur was drafted in the first round by the New Jersey Devils.

Martin Brodeur made his NHL debut against the Boston Bruins and, the following year, won the Calder Memorial Trophy as the Best Rookie in the League.

From 1995 to 1999, Brodeur experienced a lot of success with the New Jersey Devils, winning the Stanley Cup in ’95 and a silver medal with Team Canada at the World Cup of Hockey in ’96.

In 2000, Brodeur led the New Jersey Devils to their second Stanley Cup Championship and played in his sixth consecutive All-Star Game the following year.

Brodeur won the Vezina Trophy for the first time in 2002, along with the Jennings Trophy, and the following year led his team to yet another Stanley Cup Championship win.

For his performance during the 2003-04 season, Brodeur won the Vezina Trophy once again, as well as the Jennings Trophy, while also being a finalist for the Hart Trophy.

While he struggled in 2005, he made his ninth All-Star Game appearance in 2006 and set the record for the most consecutive wins for a team in the NHL.

During the 2007-08 season, Brodeur became the second goaltender in history to reach 500 victories, and by 2014, he had set numerous other records as well.

However, in 2014, Brodeur signed a tryout contract with the St. Louis Blues after ending his 21-year tenure with the New Jersey Devils.

While he signed a one-year deal, it was to be his last season, and he announced his official retirement in 2015.

Martin Brodeur has become one of the richest hockey players in the world, thanks to his 22 seasons in the NHL.

Although he was never one of the highest-paid players on the field, Brodeur still enjoyed some significant paydays.

Despite never becoming one of the highest-paid athletes in the world, Martin Brodeur did very well for himself in the NHL.

While we don’t know how much he earns today as the New Jersey Devils’ executive vice president and advisor of operations, we can imagine that it is fairly substantial.

Martin Brodeur married Melanie Dubois in 1995, and together they have four children; Anthony, Anabelle, and twins William and Jeremy.

In 2003, Melanie filed for divorce, stating that Brodeur was having an affair with Genevieve Nault, the wife of her brother.

These allegations proved to be true when, in 2008, Brodeur married Genevieve, later having their first child together, Maxime Philippe, in 2009.

Martin Brodeur has earned many awards as one of the most talented goaltenders in the NHL.

Despite all of his achievements being noteworthy, some stand above the rest for their prominence and renown.

Here are some of Martin Brodeur’s greatest awards:

Martin Brodeur may not be as decorated as Wayne Gretzky, but he has still managed to earn an impressive number of awards and honors during his time in the NHL.

How Does Martin Brodeur Spend His Money?

Martin Brodeur isn’t one to flaunt his wealth, but nonetheless, fans got a glimpse of his lifestyle when he put his New Jersey townhome up for sale in 2015.

After being appointed as special assistant to the Jersey Devils’ general manager, Brodeur placed his West Orange, New Jersey home up for sale with an asking price of $949k.

This 3,300 sqft home has loads of space, high ceilings, and a two-story foyer with huge light-giving windows.

There are hardwood floors throughout the home, a walkout recreation room, and a large master bathroom with a glass-walled shower and soaking tub.

Speaking of the master bedroom, it boasts its own fireplace, separate sitting room, and walk-in closet.

Sure, it’s not one of the biggest houses in the world, but it is certainly luxurious, and we can imagine that Brodeur has since moved into a similarly grand residence.

Martin Brodeur has enjoyed a lot of memorable moments throughout his career that have helped boost his fame in the NHL.

However, some points have been more consequential than others and stand out from all the rest.

Here are some of the best highlights of Martin Brodeur’s career:

Martin Brodeur has reached some incredible milestones throughout his career, and while other players like Pavel Bure have left a similarly impressive legacy, Brodeur is one of the few to have earned his own statue.

Martin Brodeur has spoken out about his career in many interviews that have given fans a great amount of insight into how he approached his time on the ice.

While his skills are undeniable, it is also obvious that he puts his heart and soul into the game and takes pride in what he has accomplished.

Here are our favorite quotes from Martin Brodeur:

There is a lot we can learn from Martin Brodeur and his long career as a goaltender in the NHL.

Now that you know all about Martin Brodeur’s net worth, we can take a closer look at what he can teach us about reaching our own goals.

Here are some of the best success lessons to learn from Martin Brodeur:

Everyone makes mistakes, and they aren’t something you should be ashamed of.

Consider mistakes as just another method of learning so that you can continue working to get ahead without bogging yourself down with negativity.

2. Don’t Shy Away From Teamwork

Teamwork doesn’t come naturally to everyone, but it can be essential if you want to reach your full potential.

By working with others, you can not only learn important skills, but you can open the door to unique opportunities that you wouldn’t have found otherwise.

Adversity is something that everyone who wants to be successful must learn to face.

However, instead of letting it bring you down, treat it as a challenge that will help you become stronger and smarter.

Martin Brodeur has made a name for himself as one of the most talented goaltenders in the NHL, and his skills have earned him millions.

While he has since left the ice, he continues to support his old team as the Devils’ executive vice president and advisor of hockey operations.

If you want to stay posted on Martin Brodeur’s wealth and career, make sure to check back often so you won’t miss any updates!

As of November 2022, Martin Brodeur’s net worth is estimated to be $55 Million.

What do you think about Martin Brodeur’s net worth? Leave a comment below.