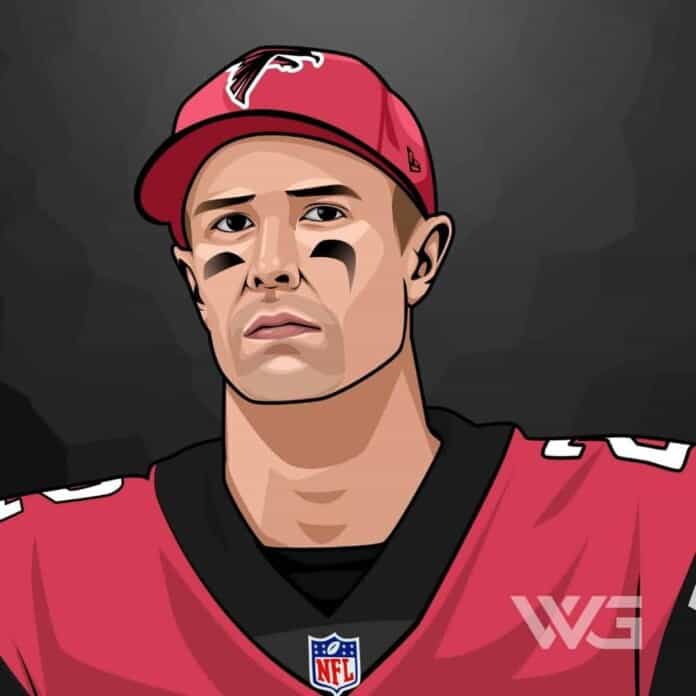 What is Matt Ryan’s net worth?

Matt Ryan is an American football quarterback and team captain for the Atlanta Falcons of the NFL.

After playing college football for Boston College, Ryan was drafted by the Falcons with the third overall pick in the first round of the 2008 NFL Draft.

Matthew Thomas Ryan was born on the 17th of May, 1985, in Exton, Pennsylvania. He is the third of four siblings.

Ryan attended the William Penn Charter School in Philadelphia. A football player from a young age, he performed quite well and received honors such as ‘All-City First Team’ and second-team recognition.

During the 2008 NFL Draft, Ryan was drafted by the Atlanta Falcons as the third overall pick. He signed a six-year contract for $72 million. This made him the fourth highest-paid quarterback in the NFL.

The same year, he was named the starting quarterback for the season’s opening game against Detroit Lions. He became the first rookie quarterback to start a season for the Falcons since 2001.

As his career progressed, he proved himself to be one of the best players of the NFL. He was named to the Pro Bowl again in the 2012 season. He was named on the list of ‘NFL Top 100 Players of 2013’ as well.

In 2018, he signed a five-year extension contract with the Falcons for $150 million. This made him the highest-paid NFL player in history.

Here are some of the best highlights of Matt Ryan’s career:

“Away from football, I’m happiest just spending time with my family and friends. They’re some of the few people who don’t ask you about football all the time, and that’s nice.” – Matt Ryan

”When you get out there and you start playing the game, you know you’ve put in a great week of preparation. That allows you to just go out there and play.’’ – Matt Ryan

“One of the great things about being a Falcon is the player-development department. They do such a great job of helping with the transition.” – Matt Ryan

“I think just the opportunity to play, to be out on that field and realize it’s the NFL and you’re playing at the highest level of competition there is, that’s pretty incredible.’’ – Matt Ryan

”The guys around me are playing really well and when you have that, it kind of makes a quarterback look better.’’ – Matt Ryan

Now that you know all about Matt Ryan’s net worth, and how he achieved success; let’s take a look at some of the lessons we can learn from him:

You may not be there yet, but you’re closer than you were yesterday.

When you feel like stopping think about why you started.

How much is Matt Ryan worth?

Matt Ryan’s net worth is estimated to be $70 Million.

How old is Matt Ryan?

How tall is Matt Ryan?

Matt Ryan also known by his nickname ‘Matty Ice’, is an American football quarterback who has proved himself to be a very efficient player.

In 2015, he stood at the 77th position on the list of the ‘Top 100 Players of the NFL’. The following year, he was named the ‘NFL Offensive Player of the Year’ as well as the ‘NFL Most Valuable Player.’

What do you think about Matt Ryan’s net worth? Leave a comment below.