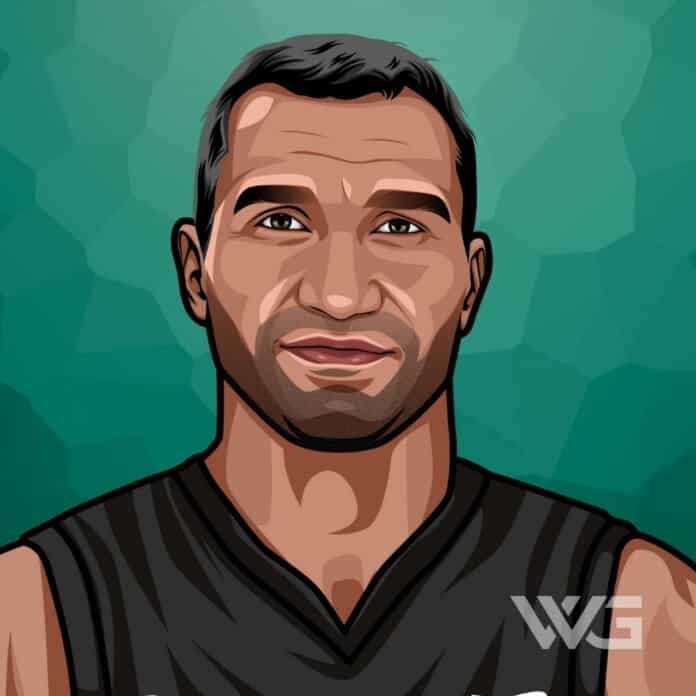 What is Wladimir Klitschko’s net worth?

Klitschko compted from 1996 to 2017. He held the world heavyweight championship twice, including the WBA, IBF, WBO, IBO, and Ring magazine titles.

He is considered to be one of the best heavyweight champions of all time. Klitschko is known for his incredible knockout power, as well as great footwork and mobility.

Wladimir Wladimirowistch Klitschko was born on the 25th of March, 1976, in Kazakhstan. He is the son of Vladimir Rodionovich Klitschko and Nadezhda Ulyanovna. His father was a Soviet Union major general who was posted as a “military attaché.”

Klitschko and his elder brother played chess, and they hold PhDs in sports science from the University of Kyiv. Their boxing career gave Wladimir the nickname of “Dr. Steelhammer.”

Klitschko turned professional under the guidance of the professional boxing trainer Fritz Sdunek. He had a straight run of 24 wins with 22 knockouts. In 1996, he fought his Olympics opponent Paea Wolfgramm.

In 2003, his fight against Corrie Sanders was termed “The Ring’ magazine’s “ Upset of the Year,” where he was dropped down twice in the first round and again in the second round till the referee had to stop the contest.

Klitschko beat Chris Byrd by a technical knockout in a contest for the “IBO” and “IBF heavyweight titles in 2006. The following year, he overcame his defeat against Lamon Brewster and won over him in the sixth round.

How Does Wladimir Klitschko Spend His Money?

Wladimir Klitschko has spent some of his money on different charities and real estate.

Klitschko has actively involved in charities that support the needs of schools, churches, and children. In 2002, he began to work for UNESCO.

Klitschko has owned plenty of real estates. He owns a fabulous apartment in Hollywood. He owns a 4,800 square penthouse in the building.

Here are some of the best highlights of Wladimir Klitschko’s career:

“Mental strength is significant because you either win or lose in your mind. And I’m not solely talking about sporting matches and boxing events – anything you do, you do it first with your mental strength. And you can actually train and develop it, and I am responsible for what I’m saying because I have experience with that.” – Wladimir Klitschko

“The first thing I learned in boxing is to not get hit. That’s the art of boxing. Execute your opponent without getting hit. In sports school, we were putting our hands behind our backs and having to defend ourselves with our shoulders, by rolling, by moving around the ring, moving our feet.” – Wladimir Klitschko

“The reality of growing up is we changed schools so many times. My brother was my best friend. We have a five-year age gap, and my brother inspired me. He started boxing, and I want to show that I could do things better than him.” – Wladimir Klitschko

“Politics is comparable to boxing. The only thing is that in politics, there are basically no rules. You can get a black eye in boxing, but in politics, you can get poison in your food or a bullet. It’s definitely rougher and tougher than other sports.” – Wladimir Klitschko

Now that you know all about Wladimir Klitschko’s net worth and how he achieved success; let’s take a look at some of the lessons we can learn from him:

When people are tipsy, they’re really encouraged, and they want to prove they can do something to the Heavyweight champion.

You lose, or you win the fight – and anything in life – in your mind. Klitschko can look at how the person walks, how he speaks, his expressions. It’s wisdom. Eyes are the mirror of the soul.

Aggression means emotions. Emotions mean you’re gonna get off your plan, and that means you’ll lose the fight.

How much is Wladimir Klitschko worth?

Wladimir Klitschko’s net worth is estimated to be $90 Million.

How old is Wladimir Klitschko?

How tall is Wladimir Klitschko?

Wladimir Klitschko is a heavyweight professional boxer from Ukraine. During his amateur career, he won the super-heavyweight gold medal at the Summer Olympics in 1996.

He turned professional under the guidance of German professional boxing trainer Fritz defeating Paea Wolfgramm of Tonga. He has been a two-time world heavyweight champion throughout his career, and he has held the World Boxing Association, the ‘International Boxing Federation,’ and the World Boxing Organization.

What do you think about Wladimir Klitschko’s net worth? Leave a comment below.