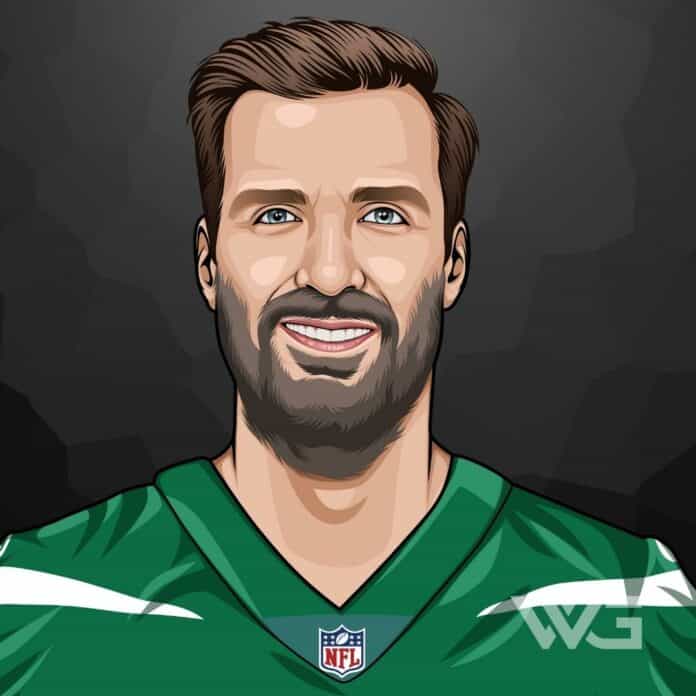 What is Joe Flacco’s net worth?

After transferring from Pittsburgh, he played college football at Delaware before being selected in the first round of the 2008 NFL Draft by the Baltimore Ravens.

Flacco has also suited up for the Philadelphia Eagles and Denver Broncos and served as the Ravens’ starting quarterback from 2008 until midway through the 2018 campaign.

Flacco played basketball, baseball, and football while he was a student at Audubon High School and, following graduation,he attended the University of Pittsburgh.

Flacco switched to the University of Delaware in 2005 where his first full-time appearance came the next year when he passed for 2,783 yards and 18 touchdowns.

By defeating the Northern Iowa Panthers in the FCS quarterfinals and the Southern Illinois Salukis in the semifinals, Flacco extended the team’s playoff run.

He helped defeat the Panthers and Salukis with two touchdown passes before falling to the Appalachian State Mountaineers in the FCS National Championship Game.

The Baltimore Ravens selected Joe Flacco with the 18th overall pick in the 2008 NFL Draft, making him the highest-drafted athlete to have come out of the University of Delaware.

Later that year, he agreed to a five-year deal with an $8.75 million guarantee, and in the regular-season opener against the Cincinnati Bengals, Flacco started at quarterback.

Flacco joins Shannon Sharpe and C.J. Mosley as a player who impacted Raven’s fortunes with his 38-yard rushing touchdown being the longest by a quarterback in the team’s history.

Flacco was a member of the Ravens from 2008 until midway through the 2018 season, and he helped lead the team to the playoffs six times.

Joe completed 22 of 33 passes for 3 touchdowns, which enabled the Ravens to come back and win the Super Bowl, 34-31.

In a loss to the Oakland Raiders in his first game with the franchise, he threw for 268 yards and is renowned for having one of the strongest arms in the history of the sport.

The New York Jets signed Joe in 2021, home to Darelle Revis, one of the best runningbacks, as well as Jamal Adams and Boomer Esiason, previously with the Bengals.

After a postseason run in which he tied Joe Montana’s single-postseason record for touchdown passes (11) without an interception, Flacco was awarded Super Bowl XLVII’s MVP.

He agreed to a six-year deal worth $120.6 million during the offseason, which was a quarterback record at the time.

As of the 2021 NFL season, Flacco leads all quarterbacks who haven’t played in a Pro Bowl in career throwing yards and touchdowns.

Joe won the AFC North twice, made three appearances in the AFC Championship Game, and defeated the San Francisco 49ers in the 2012 Super Bowl XLVII.

After a postseason performance in which he tied the single postseason record for touchdown passes without an interception, he was awarded the MVP of Super Bowl XLVII.

Here’s a breakdown of Joe Flacco’s annual net worth:

Flacco became the highest-paid quarterback in NFL history at the time when he signed a six-year deal worth $120.6 million during the offseason.

Flacco was transferred to the Denver Broncos in February 2019 following years of declining performance and a hip injury that cost him his starting spot with the Ravens.

Broncos stars over the years include Bradley Chubb, Von Miller, and Phillip Lindsay all of whom helped to improve the Denver Broncos’ standing.

Flacco married his wife Dana Grady in 2011 and the couple has five children; a daughter, Evelyn, and four sons, Stephen, Daniel, Francis, and Thomas.

He committed to Reebok for a period of three years in 2008 when he was still a rookie, and served as a Pizza Hut spokesperson from 2009 to 2010.

Other brands he has endorsed include McDonald’s, Nike, Haribo, 1st Mariner Bank, and Zynga, for which he promoted the app “NFL Showdown: Football Manager.”

Due to Darnold’s shoulder injury, Flacco was appointed the starter against the Arizona Cardinals in October 2020 – he finished with 195 throwing yards and a touchdown in a 10-30 loss.

The Jets lost against the Miami Dolphins 0-24 -the first time in Flacco’s NFL career that he was shut out despite the support of players of the caliber of Ray Lewis and Mark Ingram.

Here are some of the most notable occasions in Joe Flacco’s career:

After Darnold re-injured his shoulder, Flacco reclaimed the starting job against the New England Patriots in Week 9.

He went 18 for 25 for 262 yards and three touchdowns, which was his greatest performance of the season.

How Does Joe Flacco Spend His Money?

Joe loves cars and owns some of the most expensive cars in the world, including the Chevy Corvette Stingray he won for being named MVP in the Super Bowl.

He’s got a four-car garage to park it in his home in Baltimore, which also has a grand two-story entrance foyer complete with a dual staircase.

The six-bedroom and seven-bathroom house covers 7,361 square feet and came with a price tag of $1.8 million.

At the University of Pittsburgh, he served as the backup quarterback to starter Tyler Palko and played in just three games during the 2004 campaign, completing four passes total.

Here are some of the best highlights of Joe Flacco’s career:

Some of Flacco’s siblings are active in sports as well, with his brother John playing football for Stanford, and his brother Mike playing for the MLB’s Baltimore Orioles and Boston Red Sox.

Tom, his youngest sibling, played for Western Michigan University, Rutgers, and Towson before being signed by the Saskatchewan Roughriders of the Canadian Football League.

Joe is very confident in his abilities as a quarterback and feels that for him to do his job properly, he has to have the right attitude.

Here are our favorite quotes from Joe Flacco:

According to Joe’s dad, he’s a dull person whose personality is well-suited to the rough-and-tumble world of pro football.

Now that you know all about Joe Flacco’s net worth, here are some of the best success lessons to learn from Joe Flacco:

Joe is the epitome of calm, as he doesn’t get worked up even when he’s the Super Bowl MVP and playing in front of tens of thousands of adoring fans.

He feels that for him to perform at his best, he needs to maintain a calmness that allows him to concentrate on the game and not on the excitement surrounding the game.

It is important for Joe that he can give back to his community and to the fans that support him every season.

He has a special place in his heart for those who have disabilities and whenever he can, he gets involved in events to help them.

3. Be Safe And Consistent

Joe has the personality and the determination to play safe and conservative when the occasion requires it – not making unforced errors that could cost his team the championship.

Joe Flacco is anything but your “average Joe”, as his recent performances have shown just what a stalwart player he can be.

His career in the NFL has generated great wealth for him and his family and, with some of the biggest endorsements in the NFL, he’s well on his way to being one of the top earners ever.

He will go down in the NFL history books as an inspiration to his many fans as well as his teammates.

What do you think about Joe Flacco’s net worth? Leave a comment below.

Former racing driver Martin Brundle has earned millions from Formula One and as the 24 Hours of Le Mans Champion.