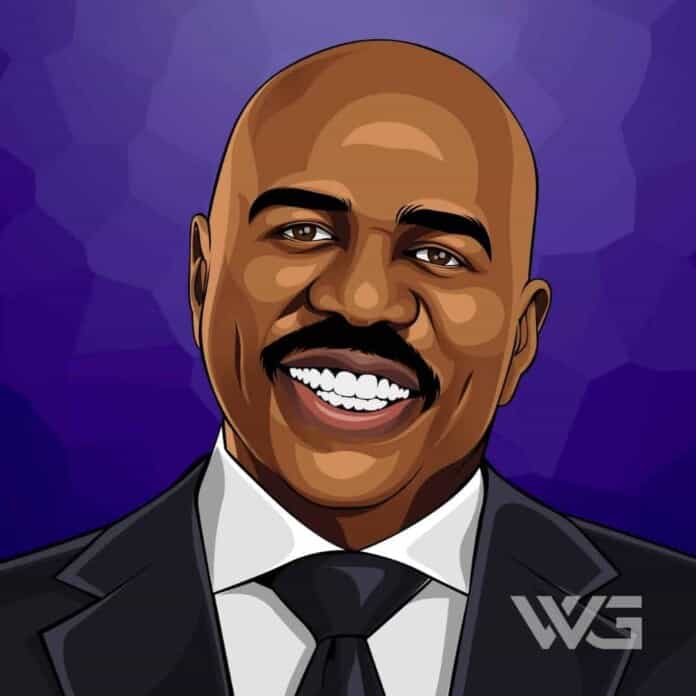 What is Steve Harvey’s net worth?

As of February 2023, Steve Harvey’s net worth is roughly $200 Million. Steve Harvey is a well-known stand-up comedian and game show host, who also has a hand in writing, producing, and film acting. The Steve Harvey Morning Show and his work with the Marjorie Harvey Foundation have ensured his continued presence in the public consciousness.

His roles are diverse, reflecting his many interests and life experiences.

He did not set out initially to become a stand-up comedian, but once he discovered the art of comedy, he never looked back

He was the youngest of five children, whose father was a coal miner. His family later moved to Cleveland, Ohio, where he graduated from high school. Following graduation, he moved back to West Virginia to attend university.

After university, he found himself working a string of jobs, including selling insurance, delivering mail, and even boxing. Harvey never found his niche until he started performing stand-up comedy in 1985.

After four years of performing stand-up comedy on small stages, he found success after reaching the finals for the Second Annual Johnnie Walker National Comedy Search in 1989.

From 1996 until 2002, Steve Harvey had his own sitcom on the WB Network, the Steve Harvey Show. This show forged the friendship between him and Cedric the Entertainer, who became his partner on the Kings of Comedy Tour, which also included Bernie Mac and D.L. Hughley.

The tour became the highest-grossing comedy tour to date in the United States.

Other endeavors of Harvey’s include his daily talk radio show, the Steve Harvey Morning Show, roles in movies such as You Got Served, and his authorship of many relationship advice books. Most recently, he became the host of Family Feud and Celebrity Family Feud.

Harvey has become one of the richest comedians in the world, alongside the likes of Kevin Hart, Jerry Seinfeld, Larry David, and Matt Groening.

As of February 2023, Steve Harvey’s net worth is roughly $200 Million – a long way from his humble West Virginia beginnings.

Here are some of the best highlights of Steve Harvey’s career so far:

“Failure is a great teacher, and I think when you make mistakes and you recover from them and you treat them as valuable learning experiences, then you’ve got something to share.” – Steve Harvey

“You can be happy, or you can be right. If you want to be part of a couple and win every argument, you’re in trouble.” – Steve Harvey

“Hollywood is run by people who sit up in their executive office, who are not connected to Mississippi, Alabama, Chicago, South Carolina. They know nothing about that, they don’t go to church, and they make their decisions about what they think is right.” – Steve Harvey

“I’m not really a relationship expert but …I’m an expert on manhood and what men think.” – Steve Harvey

“The problem is, women have stopped setting the bar high.” – Steve Harvey

“How can smart women be so stupid about men sometimes? Lack of knowledge. It’s what men have kept secret for so long.” – Steve Harvey

“You can take lessons to become almost anything: flying lessons, piano lessons, skydiving lessons, acting lessons, race car driving lessons, singing lessons. But there’s no class for comedy. You have to be born with it. God has to give you this gift.” – Steve Harvey

“Women are the real reason we get up every day. I’m talking about real men. If there were no women, I would not even have to bathe, because why would I care? These are guys I’m hanging with. I wake up for a woman every day of my life to make it happen for her.” – Steve Harvey

View our larger collection of the best Steve Harvey quotes!

Broderick Stephen Harvey is a man of many talents. Not only is he a successful comedian, actor and television host, but he’s also a successful businessman. Harvey has a number of businesses under his belt, from a production company to a line of men’s suits. He’s also a best-selling author and has his own line of home products.

Harvey’s line of men’s clothing, called the Steve Harvey Collection, is available at JCPenney stores nationwide. The collection includes stylish and affordable clothes for men of all ages.

If you’re a fan of Steve Harvey, then you’ll definitely want to check out his business ventures. You may even be inspired to start your own business after seeing how successful he is!

As one of the most successful entertainers in the world, it’s no surprise that Steve Harvey has made some savvy real estate investments. In addition to his primary residence in Atlanta, Georgia, Harvey owns several properties around the country.

One of his most notable investments is a 30-acre ranch in rural Missouri. The property includes a main house, a guest house, and several outbuildings. Harvey purchased the ranch in 2014 for $1.8 million, and it’s estimated to be worth around $2.5 million today.

In 2017, Harvey also bought a $4 million penthouse in Chicago’s Trump International Hotel & Tower. The 3,700-square-foot unit has sweeping views of the city and lakefront. He went on to sell the penthouse in 2018 after The Steve Harvey Show moved its production out of Chicago.

Harvey’s real estate portfolio also includes several rental properties. He owns a duplex in Los Angeles and several condos in Florida and Texas. These investments generate income for Harvey while also providing him with a place to stay when he’s working in those cities.

Whether he’s investing in property for himself or for others, there’s no doubt that Steve Harvey knows a thing or two about real estate. His investing strategy has paid off handsomely. He’s now estimated to have a net worth of over $200 million, and his portfolio continues to grow in value. If you’re looking for inspiration to start investing in real estate, Steve Harvey is a great example to follow!

How much is Steve Harvey worth?

Steve Harvey’s net worth is estimated to be $200 Million.

How old is Steve Harvey?

How tall is Steve Harvey?

Does Steve Harvey have kids?

Steve Harvey became a household name and role model for many African Americans in the ’90s. He has won many awards for his work in comedy, acting, and show hosting (including Steve Harvey Morning Show and Celebrity Family Feud).

His TV sitcom revitalized the WB Network, with millions tuning in to his weekly show. Since then, Harvey hasn’t shown any sign of slowing down, going on to take on multiple roles at once, reflecting his drive and determination.

What do you think about Steve Harvey’s net worth? Leave a comment below.