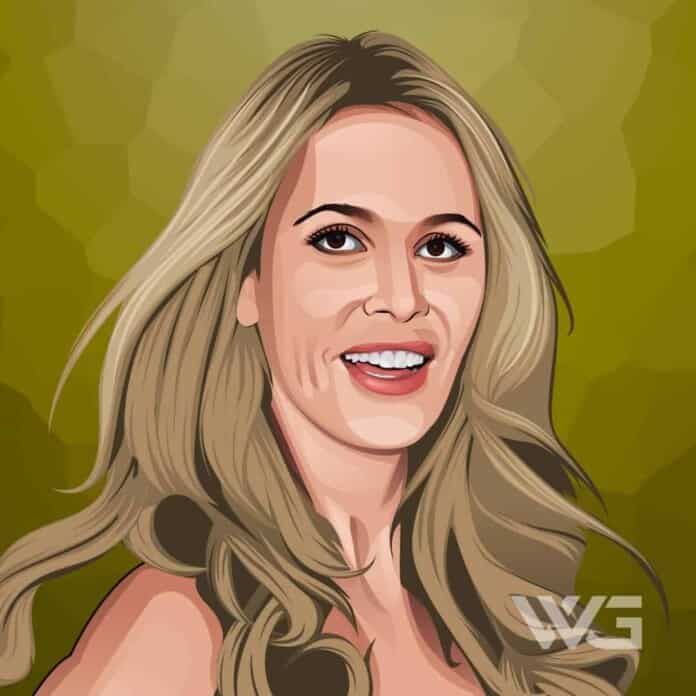 What is Elle Macpherson’s net worth?

Elle Macpherson is an Australian model, businesswoman, television host and actress from Australia.

She is known for her record five cover appearances for the Sports Illustrated Swimsuit Issue beginning in the 1980s, leading to her nickname “The Body”, coined by Time in 1989.

As of November 2022, Elle Macpherson’s net worth is roughly $95 Million.

Eleanor Nancy Gow was born on the 29th of March, 1964, in Killara, New South Wales, Australia. Her father was an entrepreneur and sound engineer who was president of Cronulla-Sutherland Sharks, an Australian professional rugby league team while her mother was a nurse.

Prior to her studies at the University of Sydney she visited the US ito pursue modelling for a year so that she can purchase her law books with the earnings.

In 1982, she made her debut in modelling with a TV advertisement of ‘The Coca-Cola Company’ manufactured diet cola soft drink ‘Tab’. The popular commercial gave her a “girl next door” image in her homeland.

The rest of the 1980s saw her featuring on prominent magazine covers including ‘New York’, Australian and British ‘Vogue’, ‘Harper’s Bazaar’, ‘Cosmopolitan’, ‘Marie Claire’, ‘Time’ and ‘Elle’ among others.

Eventually, she emerged as one of the new generation of supermodels along with Cindy Crawford, Naomi Campbell, Pavlína Pořízková, Tatjana Patitz, Christy Turlington and Linda Evangelista.

Her burgeoning modelling career further bolstered when she featured in the annual Swimsuit Issue of American ‘Sports Illustrated’ magazine in 1986.

In 1999, she became the first model to feature on a legal tender when twin island nation of Antigua and Barbuda used her face on several postage stamps. The 2000 Summer Olympics closing ceremony featured her along with other Australian icons.

Here are some of the best highlights of Elle Macpherson’s career:

“I went to America on holiday when I was 17 and before I knew it, I’d been signed up by an agency and had these obligations I didn’t understand, but which I couldn’t say no to. This industry chose me. But I did choose to make it fulfilling.” – Elle Macpherson

“Being a parent is a huge part of who I am, and of course I share that with other women. I’m not just a business woman. I’m my sons’ mother and my husband’s wife – although I never post about him on social media because he’d probably divorce me if I did! But I think by showing who I am as a mom and as a business owner, I show other women that we’re all balancing those two worlds.” – Elle Macpherson

“I used to wear heels because I wanted to show people I wasn’t ashamed of being tall. But I don’t wear them anymore because you don’t have to wear heels to be beautiful. I can’t even remember the last time I wore heels.” – Elle Macpherson

“People in the fashion industry have used the press a lot more than people in the film industry because you have nothing to sell except for the image: The image is everything.” – Elle Macpherson

Now that you know all about Elle Macpherson’s net worth, and how she achieved success; let’s take a look at some of the lessons we can learn from her about business:

As a company, Macpherson want to bridge the gap and combine wellness and beauty in the market. That’s the basis of what she does, and that’s what has helped the brand spearhead this ingestible health and plant-based movement.

Her customers are their biggest advocates, so she wants to inspire and educate them at the store.

It’s really a hub where people can come together to learn about wellness. You can come in for a free smoothie and recipes, for instance, and you’ll also be able to attend wellness talks or have a one-on-one consultation.

3. Don’t Forget To Prioritise Yourself

It’s very important to write a list of what’s important to you — and do it. For Elle, she schedules everything in a diary. She schedule her personal needs and desires with as much grace and respect as she does her business meetings.

How much is Elle Macpherson worth?

Elle Macpherson’s net worth is estimated to be $95 Million.

How old is Elle Macpherson?

How tall is Elle Macpherson?

Elle Macpherson is an Australian model, actress, television host and entrepreneur who earned the nickname “The Body” for her stunning height and athletic figure.

What do you think about Elle Macpherson’s net worth? Leave a comment below.