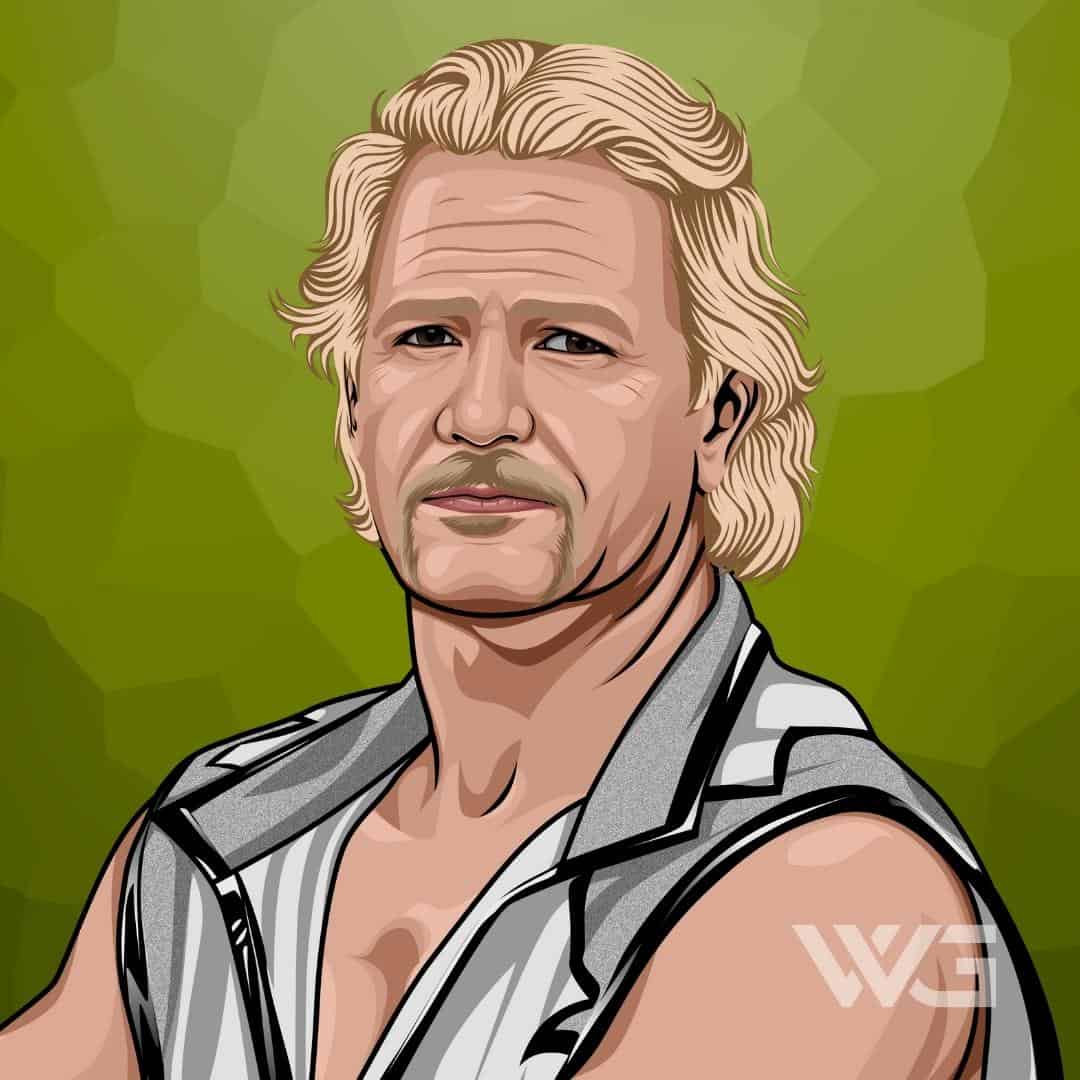 What is Jeff Jarrett’s net worth?

Jeff Jarrett started as a referee, eventually pursuing his passion by becoming a fully-fledged wrestler. He has performed for the major wrestling federations and is now a promoter and a businessman.

He’s famous for his somewhat flamboyant persona and his reign at the top as World Wrestling Champion. He has a total of 80 title wins in WWE, WWF, WCW, and AAA in Mexico.

As of February 2023, Jeff Jarrett’s net worth is estimated to be $15 Million.

Jeffrey Leonard Jarrett was born on 14 July 1967, in Hendersonville, Tennessee.

During his high school years, Jeff started working as a referee for his father at Jerry Jarrett’s Continental Wrestling Association. In high school, his dream was to become a professional basketball player, but found that he actually preferred wrestling more.

Jeff debuted in the ring at the age of 18, when he was challenged to a match by Tony Falk.

During the 1980’s, he wrestled with the Continental Wrestling Foundation and the American Wrestling Association.

Jeff made his major debut in WWE in 1992. Facing off against Bret Hart, Jeff beat the champion, earning himself his biggest victory as a youngster.

This unfortunately didn’t continue, as Jeff found himself losing many house matches to Bret Hart from there on out.

In 1995, Jeff won the Intercontinental Championship at the Royal Rumble. Following this victory, he challenged Diesel for the World Heavyweight Championship but, unfortunately, bit off more than he could chew and lost.

When he regained his title, he became a three-times Intercontinental Champion. Jeff then rejoined the WWF due to a feud with Ahmed Johnson. He lost the match against Ahmed and left the WWF altogether due to a contractual dispute.

In 1996, Jeff returned to wrestling after being hired by World Championship Wrestling on a one-year contract. His career took a turn for the better when he won the United States Heavyweight Championship in 1997.

Unfortunately, in August 1997, Jeff lost the United States Heavyweight Championship title and tried to return to the WWF.

This he did, in October 1997, winning the NWA American Heavyweight Championship. It wasn’t to last though, as he was relieved of the title in March 1998 by Cornette.

In 1999, Jeff left the WWF after the resignation of head writer, Vince Russo. He wanted to join WCW but waited for the end of his contract with WWF.  It was unfortunate that he then lost the Intercontinental Championship to Chyna.

With the large number of companies in the wrestling industry, Jeff could pick and choose, fighting for the International Wrestling Association, Lucha Libre AAA Worldwide, TNA, Wrestle-1, and New Japan Pro-Wrestling.

Jarret eventually retired from the ring in 2021, after duels with the likes of Shawn Michaels, Ric Flair, Dwayne Johnson and many others.

Having spent decades in the ring, Jeff wrestled against some of the best in the business. By moving between wrestling companies, he managed to earn a small fortune in appearance fees and salary.

It is estimated that Jeff Jarrett’s yearly salary is over $2 million per year.

Although he’s retired from wrestling, Jeff is still very involved in the business side of promotions.

Having learned the business of wrestling from his father, Jeff Jarett was able to amass quite a considerable fortune from his fight proceeds.

As a result of his business acumen and his investments in other business interests, Jeff is now a multi-millionaire.

Here’s a breakdown of Jeff Jarrett’s annual net worth:

Although less involved in wrestling than he has been in recent years, Jeff is no doubt going to keep increasing his business empire.

Jeff married his childhood sweetheart, Jill Gregory, on the 14th of November 1992. The two sweethearts went on to have three daughters.

Tragically, Jill died of breast cancer in 2007. Jeff eventually remarried after a feud or two with wrestler Kurt Angle over his ex-wife, Karen Angle. Eventually, Karen and Jeff married on the 21st of August 2010.

Jeff and his father had a falling out due to their business failing but eventually reconciled in 2015.

After many unfortunate events, Jeff struggled to cope, and after abusing various substances, had to join an inpatient rehabilitation facility in 2017.

Due to his long association with wrestling and his obvious talent, Jeff gained plenty of recognition and awards.

Here are some of the more memorable moments from Jeff Jarrett’s career:

Jeff Jarett has won and lost many of the most prestigious trophies in wrestling. While his brash and sometimes controversial persona occasionally lost him support, he was a true champion who always gave his very best for the fans.

How Does Jeff Jarrett Spend His Money?

Even with Jeff’s arrogant character, he is a big supporter of multiple charities.

With his wife’s passing due to cancer, he is a major contributor to the Leukaemia and Lymphoma Societies.

He is also a supporter of the Salvation Army Nashville.

Recently, he came out in support of an old-time favorite, James “Kamala” Harris, who lost both legs due to diabetes. Jeff donated one of his signed guitars to help raise funds for the ailing wrestler.

Jeff loves cars and has on occasion been seen in some of the most expensive cars in the world, although it is not known what his current favorite vehicle is.

As a veteran of many battles, Jeff has had his ups and downs in wrestling. But even as a teenager, it was evident that Jeff was extremely talented and tough, proving his critics wrong by becoming a champion across the globe.

Here are some of the best highlights of Jeff Jarrett’s career:

Jeff Jarett’s wins are legendary, as are his losses. It is his mercurial nature and never say die attitude that the fans loved the most.

Despite his gruff exterior, Jeff is a compassionate and thoughtful man whose life experiences have taught him humility and care for his fellow wrestlers.

This is evident in his support of wrestlers who face medical and life difficulties and his donations to worthy charities.

Here are our favorite quotes from Jeff Jarrett:

Jeff’s success as a businessman and as an athlete, however, is no coincidence. He learned a huge amount from his father in both areas and his success is in large part due to his father’s influence.

Now that you know all about Jeff Jarrett’s net worth, here are some of the best success lessons to learn from Jeff Jarrett:

When times get tough, keep going. It is vital that you keep striving to achieve your goals, no matter how many obstacles life puts in your path.

2. Reach For Your Dreams

Every success starts as a thought or a dream. If you wish for success, then follow your dreams and keep fighting until you get to the top.

Growth is the most important thing within any industry. When you stop growing you die. This advice is relevant to business and it is relevant to life.

Even with Jeff’s obvious arrogance and feuding, he still reached the top. Now that he’s retired, we may yet see Jeff return to wrestling.

Always one to keep his cards close to his chest, it’s anybody’s guess as to what Jarrett has planned for the future.

There have been many ups and downs in Jeff’s personal life and career, but it’s never stopped him from getting what he wants. After a huge struggle, Jeff reached the big leagues and is living a comfortably luxurious life with his family.

As of February 2023, Jeff Jarrett’s net worth is estimated to be $15 Million.

What do you think about Jeff Jarrett’s net worth? Leave a comment below.