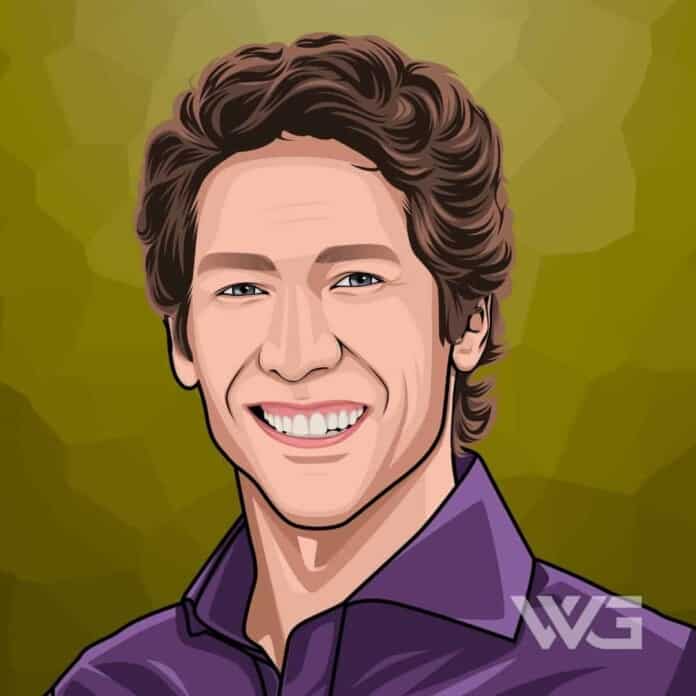 What is Joel Osteen’s net worth?

Joel Osteen is an American pastor and author. Osteen was born in Houston Texas and as of 2018, his televised sermons were seen by 10 million viewers in the United States.

His sermons have also been seen in over 100 countries weekly. He has also written many best-selling books.

As of November 2022, Joel Osteen’s net worth is estimated to be roughly $100 Million.

Joel Scott Osteen was born on the 5th of March, 1963, in Houston, Texas. Osteen is one of the five children in the family and his father was a Southern Baptist pastor and founder of the Lakewood Church.

Osteen studied at Oral Roberts University but did not graduate. He went on to set up his father’s television agency and worked alongside his father as the publishing supervisor.

In 1992, Osteen was ordained as a minister by Lakewood’s member board. After his father’s death, he started as pastor of Lakewood Church. In 2004, he released the book ‘Your Best Life Now: 7 Steps to Living at Your Full Potential’, which became a huge hit.

The following year, he moved Lakewood Church into the Compaq Center. In 2007, he released his second book, ‘Become a Better You: 7 Keys to Improving Your Life Every Day’.

The same year, a 12-minute segment ‘Joel Osteen Answers his Critics’ aired on ’60 Minutes’. Osteen authored the book ‘Daily Readings from Become a Better You: 90 Devotions for Improving Your Life Everyday’ in 2008.

In 2011, Osteen was seen on Piers Morgan‘s show ‘Piers Morgan Tonight’. He mentioned that he never attended a seminary and he never received a divinity degree in his life.

How Does Joel Osteen Spend His Money?

More than 4.6 million people watched his Easter Sunday recording online. With this said, there is no doubt that Osteen can spend his money on lavish cars and real estate.

Osteen is a proud owner of a home in Houston. He purchased the real estate for a total of $10.5 million. He also owns another beautiful mansion in Tanglewood, Houston worth $2.9 million.

Osteen owns many lavish cars, but one of his most expensive cars that we can see in his garage is a Ferrari 458 Italia.

Here are some of the best highlights of Joel Osteen’s career:

“God has already done everything He’s going to do. The ball is now in your court. If you want success, if you want wisdom, if you want to be prosperous and healthy, you’re going to have to do more than meditate and believe; you must boldly declare words of faith and victory over yourself and your family.” – Joel Osteen

“Don’t ever criticize yourself. Don’t go around all day long thinking, ‘I’m unattractive, I’m slow, I’m not as smart as my brother.’ God wasn’t having a bad day when he made you… If you don’t love yourself in the right way, you can’t love your neighbor. You can’t be as good as you are supposed to be.” – Joel Osteen

Now that you know all about Joel Osteen’s net worth, and how he achieved success; let’s take a look at some of the lessons we can learn from him:

1. Choose To Be Positive

It’s easy to get negative because you get beat down. You go through a few disappointments and it’s easy to stay in that negative frame of mind. Choosing to be positive and having a grateful attitude is a whole cliche, but your attitude is going to determine how you’re going to live your life.

The main rule to me is to honor God with your life. To live a life of integrity. Not be selfish. You know, help others. But that’s really the essence of the Christian faith.

You may make some mistakes – but that doesn’t make you a sinner. You’ve got the very nature of God on the inside of you.

Don’t grow accustomed to living with less, doing less, and being less to the point that you eventually sit back and accept it.

How much is Joel Osteen worth?

Joel Osteen’s net worth is estimated to be $100 Million.

How old is Joel Osteen?

How tall is Joel Osteen?

Joel Osteen is known for his trademark smile, and he has won the hearts of over 7 million people worldwide. He usually delivers sermons in stadiums and sports arenas.

With the huge number of listeners and audiences, he manages to amass, and he is a spiritual guru and a religious icon on his own. His other works have also made it to the New York Times bestsellers list.

As of November 2022, Joel Osteen’s net worth is estimated to be roughly $100 Million.

What do you think about Joel Osteen’s net worth? Leave a comment below.