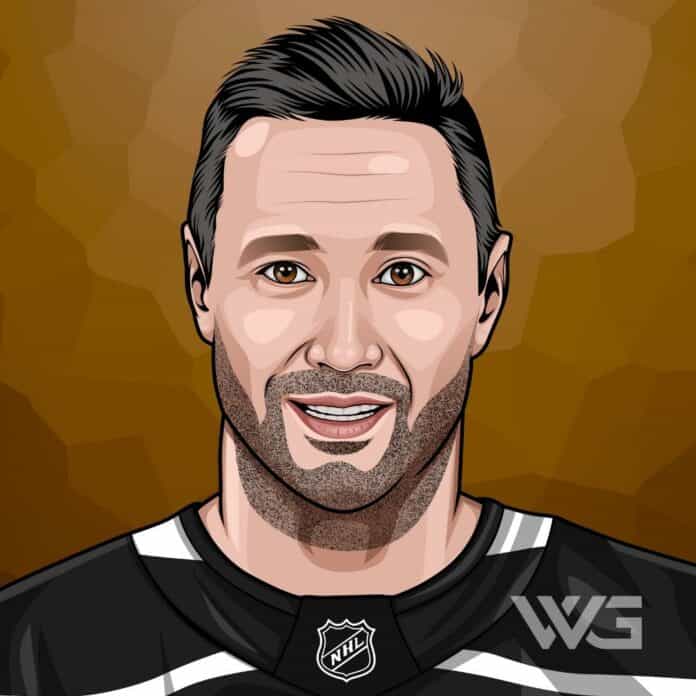 What is Ilya Kovalchuk’s net worth?

Ilya Kovalchuk is a Russian professional ice hockey player who has played for some of the best teams in the National Hockey League.

He has won several gold medals on the international stage, including the IIHF World Championship.

As of January 2023, Ilya Kovalchuk’s net worth is estimated to be $60 Million.

Ilya Valeryevich Kovalchuk was born 15 April, 1983, in Kalinin, Soviet Union, where he was raised by his parents, Valeri and Lyubov.

His father played basketball as a youth and worked as the head of the sport’s school at the Spartak Olympic reserve during the 1980s.

Ilya was coached by his father in ice hockey, with his father later writing a book on his player development called From Tver to Atlanta.

Kovalchuk played hockey in the 1997 Quebec International Pee-Wee Hockey Tournament with Spartak Moscow, and after two seasons, he joined the National Hockey League.

Ilya Kovalchuk was drafted into the Atlanta Thrashers IN 2001 after finishing first overall in the NHL Draft that year.

During his rookie season, he scored a total of 51 points, placing second in voting after Dany Heatley for the title of rookie of the year.

By 2004, he had established a reputation as a strong player, scoring 41 goals in the season to tie him with Jarome Iginla and Rick Nash for the NHL lead in goals.

The following year, he tied with Alexander Ovechkin for third place in NHL scoring and reached a career-high of 98 points.

Kovalchuk moved to the New Jersey Devils in 2010 after turning down a reported $110 million contract to remain with the Thrashers.

He continued to dominate the sport over the following years, playing for SKA Saint Petersburg between 2013 and 2018 before moving to the Los Angeles Kings in 2018.

Kovalchuk has a solid track record playing for Russia in international games, winning medals at the IIHF World U18 Championships and the Olympic Games in 2002.

Ilya Kovalchuk has enjoyed huge success throughout his career, with several highly paid contracts for some of the leading teams.

His career earnings reflect his consistent value, with the star player taking home in excess of $5 million per year over a significant period of his career.

With a combined career income comparable to some of the richest hockey players in the world, Ilya Kovalchuk has seen significant growth in his net worth.

His career took off in the early 2000s, allowing him to build up a considerable fortune and invest in real estate and other business ventures.

While his recent earnings aren’t as high as during his peak, he remains a high earner, so we can expect his net worth to climb.

In 2002, Kovalchuk met his future wife, Nicole Andrazajtis, a well-known singer in Russia, after mutual friends introduced the couple.

They married in 2008 and have four children together, including daughters Karolina and Eva and sons Philipp and Artem.

While Kovalchuk doesn’t have a presence on social media, his official NHL page features everything fans need to know about his playing history.

Over the course of his career, Ilya Kovalchuk has received many awards and nominations for his professional ice hockey games.

While he isn’t as celebrated as Wayne Gretzky, his list of accomplishments on the national and international stage remains impressive.

Here are some highlights from Ilya Kovalchuk’s career:

These examples highlight his consistent playing style and mark him as a great ice hockey player destined for the history books.

We can expect more awards and honors to come as Ilya Kovalchuk’s career continues into the future.

How Does Ilya Kovalchuk Spend His Money?

Ilya Kovalchuk’s impressive earnings and net worth have allowed him to invest in significant real estate over the course of his career.

Some of these properties compare to the most expensive houses in the world, with one New Jersey mansion listed for $15 million in 2022.

Ilya Kovalchuk has enjoyed many high points and successful moments in a career spanning over a decade.

He’s set several new records during this time, in addition to his lucrative contracts and brand endorsement deals.

Here are some of the best highlights of Ilya Kovalchuk’s career:

It’s an impressive track record for a player known for his solid performance in the rink and ability to break records.

He continues to play as an unrestricted free agent, so we can anticipate many more high points as his career continues to unfold.

With his extensive experience playing professional ice hockey for over a decade, Ilya Kovalchuk has plenty of insights into the sport.

He’s shared his insights on many occasions, from what it takes to win and how he fosters the best mindset before a game.

Here are our favorite quotes from Ilya Kovalchuk:

Now that you know all about Ilya Kovalchuk’s net worth, we’ll look at how his life and experience can help us succeed.

His dedication to training and commitment to his craft serves as a valuable lesson to anyone looking to excel in their lives.

Here are some of the best success lessons to learn from Ilya Kovalchuk:

1. Learn From Your Parents

Ilya Kovalchuk’s successful career might never have happened were it not for the dedicated coaching and training provided by his father.

If you have parents who can share their skills and experiences with you, take the opportunity to learn from them.

While Kovalchuk could have accepted a deal worth over $100 million, he wasn’t able to take it due to its circumvention of the NHL salary cap.

This didn’t deter him from pursuing his ambitions as a professional ice hockey player and led to lucrative contracts elsewhere.

3. Don’t Rest On Your Laurels

Kovalchuk achieved a great deal early in his career, including a trophy win and establishing new records in ice hockey.

He didn’t take things any easier after these accomplishments, dedicating his time and effort to becoming an even better player in the years that followed.

That concludes this article exploring the personal and professional life, career earnings, and net worth of Russian ice hockey player Ilya Kovalchuk.

It’s a career worthy of celebration, with many victories spread across multiple teams both in Russia and the West.

Since he continues to play, his net worth will likely increase in the future, so make sure you return to this article for the latest facts and figures.

As of January 2023, Ilya Kovalchuk’s net worth is estimated to be $60 Million.

What do you think about Ilya Kovalchuk’s net worth? Leave a comment below.