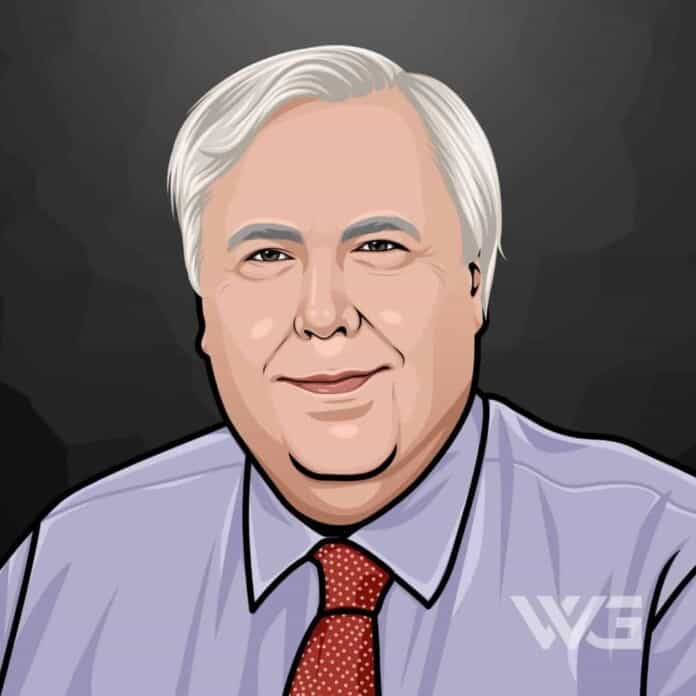 What is Clive Palmer’s net worth?

Clive Palmer is an Australian businessman and politician.

Clive Frederick Palmer was born on the 26th of March, 1954, in Footscray, Melbourne.

He spent his early years in the nearby suburb of Williamtown.

His father was a travel agent, and the family normally traveled the world regularly.

His father was also the proprietor of the Akron Tyre Co and the Akron Broadcasting Co and, thus, the founder of Melbourne broadcasting station 3AK.

Palmer dropped out of the University of Queensland before he completed his law and journalism studies. He was born in Melbourne, Australia.

He has been involved in many business industries.

Palmer is the owner of Mineralogy, which works in iron ore reserves, and he later bought Waratah Coal, Queensland Nickel, and the Palmer Nickel and Cobalt Refinery.

In 2008, Palmer ventured into soccer, buying Gold Coast United in an effort to boost his image in China.

A few years later, his license was revoked by the Football Federation Australia, and he founded a competing league.

He is the businessman behind the creation of ‘Titanic II,’ which is a recreation of the famous ship that set sail from Southhampton to New York in 2016.

In 2013, Palmersaurus opened in Australia.

The same year, he created his own political party, Palmer United Party, to contest the federal election and ended up winning the Queensland seat in the House of Representatives.

His first wife, Susan, died of cancer after 22 years of marriage.

How Does Clive Palmer Spend His Money?

Palmer is an avid car enthusiast, and he has one of the nation’s biggest and most expensive car collections.

Clive Palmer spends his money on expensive mansions and cars.

Palmer purchased a mansion in Australia for $12 million with five bedrooms, a gym, a wine cellar, a lift, and a lap pool at 9 Hedges Avenue.

He also owns a home in Brisbane which he bought for $7.5 million.

Here are some of the best highlights of Clive Palmer’s career:

“Frank Lowy is an institution in Australian sport, but judging by this decision he might be visiting a different kind of institution. He has brought the game into disrepute. The sport should not be run by dictators like him.” – Clive Palmer

“The Greens have not been providing you with the full information about where their money comes from or what it’s about. I think the Greens in this upcoming state election should resign if they’re being funded by an offshore political power. It’s tantamount to treason, and something needs to be done about it.” – Clive Palmer

“People, regardless of political views, matter in this state and in this country and in this world. And, you know, when people attack people’s basic rights and livelihoods, I’m concerned about it. And as a citizen of Queensland and nothing else, I’ve got the right to express my view.” – Clive Palmer

“I’ve got enough money in my life to retire now and do nothing. But I’ve got a duty and obligation to see if we can create more jobs in this state, and the government’s got an obligation to approve projects and to assess them for the benefit of the people of Queensland.” – Clive Palmer

“I’ve never needed a lobbyist personally to put my case. I’d rather put my case myself. But I don’t understand how other people look at things. A lot of people in business haven’t been involved in politics. They are frightened of ministers and the whole procedure. It’s not something to be frightened of.” – Clive Palmer

Now that you know all about Clive Palmer’s net worth and how he achieved success; let’s take a look at some of the lessons we can learn from him:

One person’s persistence is another person’s pig-headedness.

Do your best and put the fundamentals in place, and everything else will follow.

Don’t attack the person who attacks the idea.

How much is Clive Palmer worth?

Clive Palmer’s net worth is estimated to be $2.2 Billion.

How old is Clive Palmer?

How tall is Clive Palmer?

Clive Palmer is an Australian entrepreneur, businessman, and politician.

Palmer owns Mineralogy Ltd, which is an ore mining company that operates in Western Australia.

Palmer owns the Australian football team, Gold Coast United FC. He was in the facility of Deakins University from 2002-2006.

What do you think about Clive Palmer’s net worth? Leave a comment below.