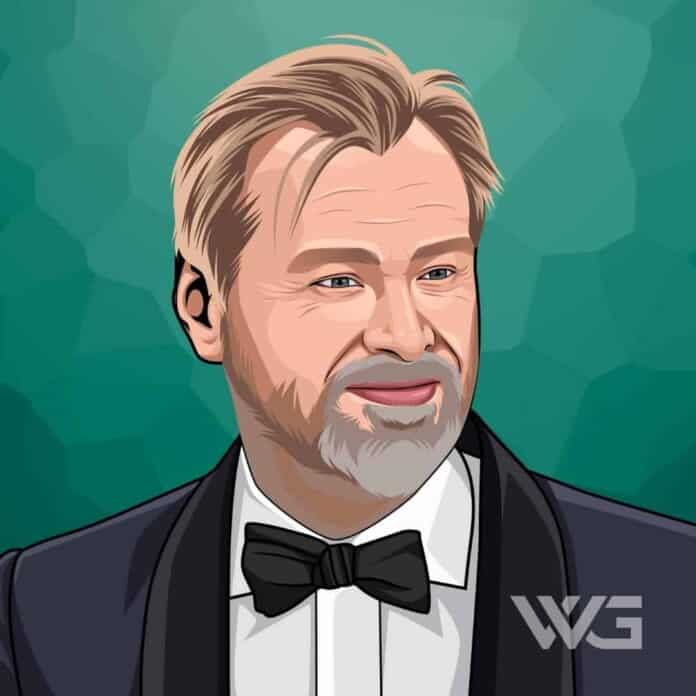 What is Christopher Nolan’s net worth?

Christopher Nolan is an English-American film director, screenwriter, and producer. He is known for making personal, distinctive films within the Hollywood mainstream and is regarded as an auteur.

As of December 2022, Christopher Nolan’s net worth is estimated to be $250 Million.

Christopher Edward Nolan was born on the 30th of July, 1970, in Westminster, London. His English father, Brendan James Nolan, was an advertising executive, and his American mother, Christina, worked as a flight attendant and an English teacher.

He began making films at age seven, borrowing his father’s Super 8 camera and shooting short films with his action figures. Growing up, Nolan was particularly influenced by 2001: ‘A Space Odyssey’ and ‘Star Wars’.

Nolan directed his first feature film ‘Following’ in 1998. The story was about a young writer who follows strangers around the streets of London, only to be drawn into the world of crime.

After the success of ‘Following’, Nolan directed the psychological thriller ‘Memento’. The film was about a man who suffers from anterograde amnesia, the inability to form new memories. It earned Nolan two Oscar nominations.

He next directed the film ‘Insomnia’, which released in 2002.

It was about two homicide detectives investigating a murder. The film did well commercially. Nolan’s popularity reached new heights after he directed the 2005 superhero film ‘Batman Begins’.

Nolan next directed the science fiction film ‘Inception’. It revolved around a professional thief who could steal information by infiltrating one’s subconscious. Known to be one of the best science fiction films ever made, the film was also a huge success commercially. It won four Oscars.

Here are some of the best highlights of Christopher Nolan’s career:

“I’ve been fascinated by dreams my whole life since I was a kid, and I think the relationship between movies and dreams is something that’s always interested me.“ – Christopher Nolan

“I’ve always believed that if you want to really try and make a great film, not a good film, but a great film, you have to take a lot of risks.” – Christopher Nolan

“You need time. And that doesn’t mean necessarily even working full-time on it itself; it means time to throw some ideas together and then let them sit, go off and do something else, come back and see what still feels right and everything.” – Christopher Nolan

“One of the things you do as a writer and as a filmmaker is grasped for resonant symbols and imagery without necessarily fully understanding it yourself.“ – Christopher Nolan

“We all wake up in the morning wanting to live our lives the way we know we should. But we usually don’t, in small ways. That’s what makes a character like Batman so fascinating. He plays out our conflicts on a much larger scale.“ – Christopher Nolan

Now that you know all about Christopher Nolan’s net worth, and how he achieved success; let’s take a look at some of the best lessons we can learn from him:

1. Organizations Need To Be Built Around Ideas, Not People

What lesson can we take away from this? Well, the people who build great organizations and companies are often larger-than-life. They drive their businesses forward with their energy and passion.

But one problem that such organizations face is that when they become completely identified with a single person, their fortunes can rise and fall based on what that one person does.

In organizations as a leader, we often have the best of intentions for our team. The right-hand man that you rely on? You do plan on giving him more responsibility and training.

That awesome clerk you hired a year ago?

She’s efficient and way overqualified for her work. You plan on expanding her responsibilities and getting her a promotion. That engineer with a great new idea – you’re definitely going to talk to your boss about getting some R&D money to develop it.

3. Trust People With The Truth

Leaders often trick themselves into thinking that people can’t be trusted with the truth and that if they learn it, bad things will happen. This is a fundamental mistake.

If things aren’t going well with your organization, the best thing to do is to put everything out in the open. Trust your team to be adults, capable of handling the truth.

How much is Christopher Nolan worth?

Christopher Nolan’s net worth is estimated to be $250 Million.

How old is Christopher Nolan?

How tall is Christopher Nolan?

Christopher Nolan is an English film director who is considered one of the most acclaimed and successful filmmakers of the 21st century.

What do you think about Christopher Nolan’s net worth? Leave a comment below.