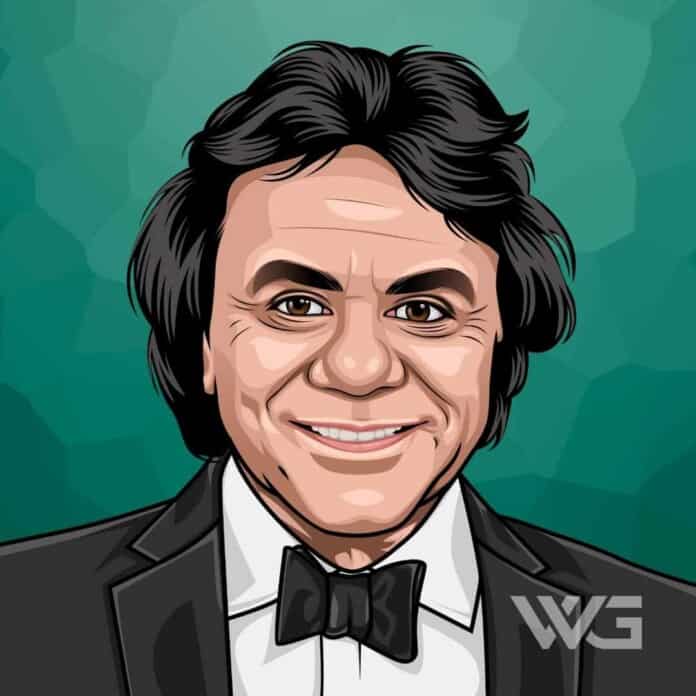 What is Johnny Mathis’s net worth?

Johnny Mathis is one of the most successful artists in music history, and multiple albums released by him have achieved gold or platinum status.

To date, Mathis has sold over 400 million records, placing him third in the world behind Frank Sinatra and Elvis Presley in record sales.

Despite starting his career in 1959, Johnny Mathis is still making music and growing his fortune.

John Royce Mathis was born in 1935 in Gilmer, Texas, as the fourth of seven children.

Mathis’ parents, Clem Mathis and Mildred Boyd, were both domestic cooks and moved the family to San Francisco, where John grew up.

When Mathis was 13, vocal coach Connie Cox accepted him as her student in exchange for him performing work around her house.

He studied with Cox for six years, and after high school, he enrolled at San Francisco State College on an athletic scholarship with the intention of becoming an English teacher and physical education teacher.

Johnny Mathis’s entry into the music industry came in 1955 when he sang at the Black Hawk Club in San Francisco.

The club’s co-founder, Helen Noga, took an interest in him and invited George Avakian, the head of Popular Music at Columbia Records, to come and listen to him.

Avakian liked Mathis so much that he immediately telegraphed the record company for blank contracts to sign him.

While his first album, Johnny Mathis: A New Sound in Popular Music, was a slow-seller, Mathis’s first appearance on the Ed Sullivan Show in 1957 helped boost his popularity.

In November of the same year, he released “Wild Is The Wind,” which featured in the film of the same name, and Mathis earned an Academy Award nomination for Best Original Song.

His album, Johnny’s Greatest Hits, was released a week before his Academy Award appearance, and spent 490 straight weeks on the Billboard charts, holding the record until Pink Floyd’s The Dark Side of the Moon was released in 1973.

After separating from Noga in 1964, Mathis established Jon Mat Records in 1967 to produce his own recordings.

His success continued to climb into the 2000s, with Mathis performing between 50 and 60 concerts yearly.

Along with greats like Bob Dylan, Tony Bennett, Bruce Springsteen, and Barbara Streisand, Mathis holds the distinction of having one of the longest tenures at Columbia Records, which he still uses to distribute his music.

Because Johnny Mathis is one of the most prolific singers in the music industry, it is no surprise that his net worth is exceptionally high.

There are a few ways Mathis continues to earn his money, including:

While his overall record sales have brought in roughly $2, most of the earnings go to record corporations, leaving Mathis with only a fraction of their full value.

Aside from music, Johnny Mathis has always had a passion for sports. Today, he is an avid golfer who has hosted numerous Johnny Mathis Golf Tournaments in the US and UK.

Since 1985, he has regularly hosted a charity golf tournament in Belfast, sponsored by the Shell corporation.

In 1982, in an interview with Us Magazine, Mathis stated that “Homosexuality is a way of life that I’ve grown accustomed to”, though he later said that his comment was supposed to be off the record.

After this, Mathis declined to address his sexuality further until an interview with CBS News Sunday Morning, where he confirmed that he is gay and had received death threats after the publication of the Us Magazine article.

He has never married but has stated that he’s had both girlfriends and boyfriends in the past.

While he isn’t very active on social media, his official website is always updated with information on his work and life.

With a career as long and storied as Mathis’s, it should be no surprise that he has received many awards and honors.

While we can’t possibly cover them all, we’ve rounded up the greatest milestones and achievements he has received.

Here are some highlights from Johnny Mathis’s career:

How Does Johnny Mathis Spend His Money?

With Johnny Mathis’ net worth, it’s easy to imagine him cruising around in the most expensive cars in the world or flying to concerts on an exclusive private jet.

However, Mathis is very frugal with his money, having only owned one home in the Valley for the past 50 years.

Unfortunately, in 2015, this home was ravaged by fire, forcing the singer to move into a penthouse in Beverly Hills, which he has lived in since while planning to rebuild his previous home.

Aside from these ventures, Mathis invests most of his money in producing music and maintaining his recording label.

Throughout his long musical career, Mathis has reached a lot of significant milestones.

Here are some of the best highlights of Johnny Mathis’s career:

Throughout his career, Johnny Mathis has said many remarkably motivational things, and his wisdom is very admirable.

While you could fill a book with everything noteworthy Mathis has said, we’ve rounded up some of the best.

Here are our favorite quotes from Johnny Mathis:

Now that you know all about his net worth, we can take a deeper look at what his life and career can teach us about reaching our goals.

While he may be a professional singer, there is a lot that everyone can learn from him.

Here are some of the best success lessons to learn from Johnny Mathis:

Johnny Mathis credits a lot of his success to the people surrounding him, and this is something that can benefit everyone.

While there are always things you’ll have to do for yourself, isolation can hinder progress and make it even harder to get ahead.

Sometimes, collaborating with your friends and colleagues is the best way to achieve your goals.

Despite his incredible success, Johnny Mathis is remarkably humble and has never let fame go to his head.

While some people, like Kanye West, play up their wealth and achievements, humility can be essential for keeping yourself grounded, something that the people around you will appreciate.

3. Be Your Number One Fan

Although it is great to have people admire and praise your work, it isn’t very meaningful if you don’t feel it for yourself.

While everyone may be their own biggest critic, it’s important to give credit where it is due and learn to love your own work as much as the people around you.

Johnny Mathis’ net worth is just as impressive as his incredible career, and he isn’t showing signs of slowing down any time soon.

Mathis’ wealth will likely continue growing as he continues introducing his music to new generations of fans, so be sure to check back in the future for updates!

What do you think about Johnny Mathis’s net worth? Leave a comment below.