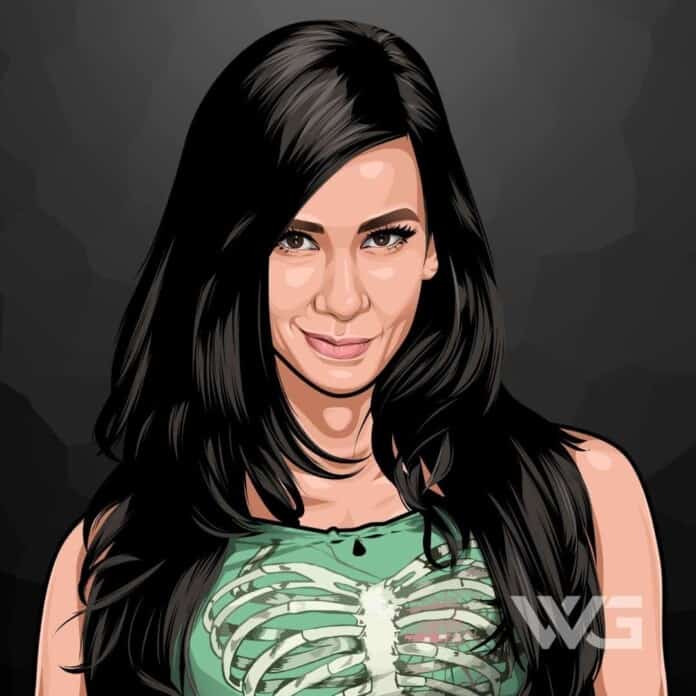 What is AJ Lee’s net worth?

AJ Lee is an American professional wrestler known for her successful tenure with the WWE and marriage to wrestling icon CM Punk.

After retiring from professional wrestling, Lee wrote the book Crazy Is My Superpower, which became a bestseller.

AJ Lee was born April Jeanette Mendez on March 19, 1987, in Union City, New Jersey, where she was raised by her mother, Janet Acevedo, and her father, Robert Mendez.

Of Puerto Rican descent, Lee is the youngest of three children, with her family frequently moving from one apartment to the next while struggling with poverty.

Influenced by her brother to pursue a career in professional wrestling, Lee attended New York University’s Tisch School of the Arts, majoring in film and television production.

In 2009, she was signed up to World Wrestling Entertainment, shortly after changing her ring name to AJ Lee and losing the Queen of FCW title to Rosa Mendes.

As her career flourished, Lee worked with some of the biggest names in wrestling and was featured alongside stars including John Cena and Nikki Bella, among others.

After becoming Diva champion in 2013, Lee successfully defended her title from challenges by Brie Bella, Natalya, and Naomi, becoming the longest-reigning Diva Champion of all time.

AJ Lee’s precise career earnings are unknown, but her success with the WWE will have ensured a consistent income over the years she worked with the company.

It’s likely that this estimate is short of the actual amount since it omits any potential endorsements and other deals that bring AJ Lee income.

Additional income will come through the sales of her bestselling book, which topped the New York Times bestsellers list for a short period of time.

As with her career earnings, precise details about AJ Lee’s net worth over time aren’t known, although we can assume that certain events will have given her wealth a considerable boost.

Her deal with the WWE no doubt increase her value following her promotion to the main roster after wrestling for the Florida Championship Wrestling.

Ongoing sales of Crazy Is My Superpower is also likely to help AJ Lee’s net worth continue to grow, with a second book rumored to be in the works.

Throughout her tenure with the WWE, AJ Lee had several relationships with her fellow wrestlers.

In 2014, she married one of the richest wrestlers in the world, CM Punk, retiring from wrestling the following year.

Throughout the course of her career, AJ Lee has won various awards and accolades in the wrestling industry.

Here are some highlights from AJ Lee’s career:

How Does AJ Lee Spend Her Money?

AJ Lee has accumulated an impressive net worth over a short period of time, giving her enough income to invest in luxury goods.

While the details of her real estate investments aren’t known, she shares a home in Chicago with her wrestling professional and commentator husband, CM Punk.

She has often expressed an interest in comic books, video games, and anime and has been reading Marvel comics since she was in the fourth grade.

AJ Lee’s career has seen her enjoying huge success as a professional wrestler, capturing the hearts and minds of millions of wrestling fans around the world.

Here are some of the best highlights of AJ Lee’s career:

With her impressive career both as a professional wrestler and a best-selling author, AJ Lee has lots of insights she’s shared in interviews.

Here are our favorite quotes from AJ Lee:

Now that you know all about AJ Lee’s net worth, let’s examine the life lessons and insights we can learn from her career as a professional wrestler and celebrated writer.

Here are some of the best success lessons to learn from AJ Lee:

1. If You Suffer From Mental Health Issues, Take Up Exercise

With her background with bipolar disorder and the struggles she went through to cope with the illness, AJ Lee understands just how important exercise can be for overcoming mental health issues.

2. Take The Time To Share Your Insights Into Success With Others

AJ Lee’s successful transition from professional wrestler to author shows how receptive others can be if you have valuable insights to share.

Don’t underestimate the value of your own experiences, particularly if they can help others to improve their lives.

3. Give Credit Where Credit Is Due

Over the course of her career, AJ Lee has had help from many of her wrestling colleagues, without whom she wouldn’t have enjoyed the same degree of success.

She consistently praises her fellow wrestlers for everything they did to help her, understanding the importance of gratitude.

That concludes this overview of AJ Lee’s net worth, covering the wrestling career highlights and her first foray as a bestselling author.

As a wrestler, Lee won a string of awards, becoming one of the most admired female wrestlers in the WWE before her retirement in 2015.

With additional books in the pipeline, her net worth is likely to increase, so make sure you check back on this article to find out the details.

What do you think about AJ Lee’s net worth? Leave a comment below.