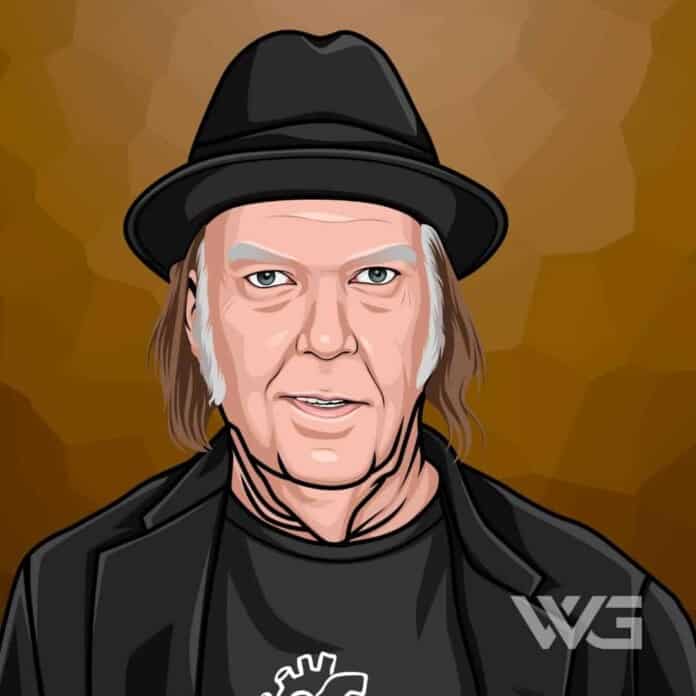 What is Neil Young’s net worth?

Neil Young is a Canadian-American musician and activist.

Young embarked on his music career in the 1960s, and after that, he moved to Los Angeles to join Buffalo Springfield with Stephen Stills, Richie Furay, and others. Since his solo albums, Young has been prolific, recording a steady stream of studio and live albums. He has won several awards for his work.

Neil Young was born on the 12th of November, 1945, in Toronto, Canada. His father was a journalist and sportswriter, and his mother was a member of the Daughters of the American Revolution. His parents got married in 1940 in Manitoba.

Young and his family moved to Ontario after his birth. Young has described Ontario as a “sleepy little place.” In 1952, he suffered from polio, and the Canadian singer Joni Mitchell then aged nine, also contracted the virus.

Being a solo artist, Young released his first self-titled album in 1969. He formed the band Crazy Horse and worked with them on his second album, ‘Everybody Knows This is Nowhere.’

Young’s album ‘Harvest’ proved to be one of his most successful albums. It contained the single ‘Heart of Gold,’ which reached the number one spot on the charts. This made Young a popular and successful figure over the next few years. One of his most notable songs during this period was ‘Old Man’.

In 1989, he bounced back with ‘Rockin’ in the Free World’. Kurt Cobain often named Young as a major. Influence, improving his popularity among younger generations. Over the next years, Young focused more on activism. In 2020, he announced that he would release his “long lost” album ‘Harvest.’

How Does Neil Young Spend His Money?

Neil Young spends his money on real estate and model trains. Young used to own a home in Malibu before the home was burned down from the Woolsey fire in 2018.

Young owns a home in Redwood City, California. He calls the property “Broken Arrow Ranch”. The home is at the end of Bear Gulch Road and is a cabin-style residence.

Young was a part-owner of Lionel LLC, a company specializing in model trains and related accessories. He lost his shares in the company through bankruptcy. He has also helped create Pono, an online music download streaming service.

Here are some of the best highlights of Neil Young’s career:

“I have a lot of faith in the younger generation of music lovers. Youth isn’t living in the past; if somebody tells them that there’s something better than what they have, they’re going to check it out. And if they like it, they’re going to get it. I’m not worried about the youth. Young people aren’t just looking back. They are also looking forward.” – Neil Young

“For whatever you’re doing, for your creative juices, your geography’s got a hell of a lot to do with it. You really have to be in a good place, and then you have to be either on your way there or on your way from there.” – Neil Young

“A lot of people that buy vinyl today don’t realize that they’re listening to CD masters on vinyl and that’s because the record companies have figured out that people want vinyl, And they’re only making CD masters in digital, so all the new products that come out on vinyl are actually CDs on vinyl, which is really nothing but a fashion statement.” – Neil Young

“Back then, people closed their eyes and listened to music. Today there’s a lot of images that go with the music. A lot of music is crap, and it’s all commercial, and the images are all trying to sell the record.” – Neil Young

“All these people talking about morality should take a walk downtown. They don’t want to go downtown because instantly they see homeless people and they don’t want to.” – Neil Young

Now that you know all about Neil Young’s net worth and how he achieved success; let’s take a look at some of the lessons we can learn from him:

As soon as you start talking about mystique, you have none.

Don’t let it bring you down. It’s only castles burning, find someone who’s turning, and you will come around.

You know, the future’s a huge, gigantic place. We have no idea what’s going on out there. Walk into it and see what happens.

How much is Neil Young worth?

Neil Young’s net worth is estimated to be $200 Million.

How old is Neil Young?

How tall is Neil Young?

Neil Young is a well-established singer and songwriter. Young is a talented multi-instrumentalist known for his folk-rock music.

After a long career spanning many decades, he has emerged as one of the most popular and successful musicians of all time. He has won several Grammys and Juno Awards. Young was also inducted into the Rock and Roll Hall of fame. The majority of his net worth is a result of his record sales.

What do you think about Neil Young’s net worth? Leave a comment below.