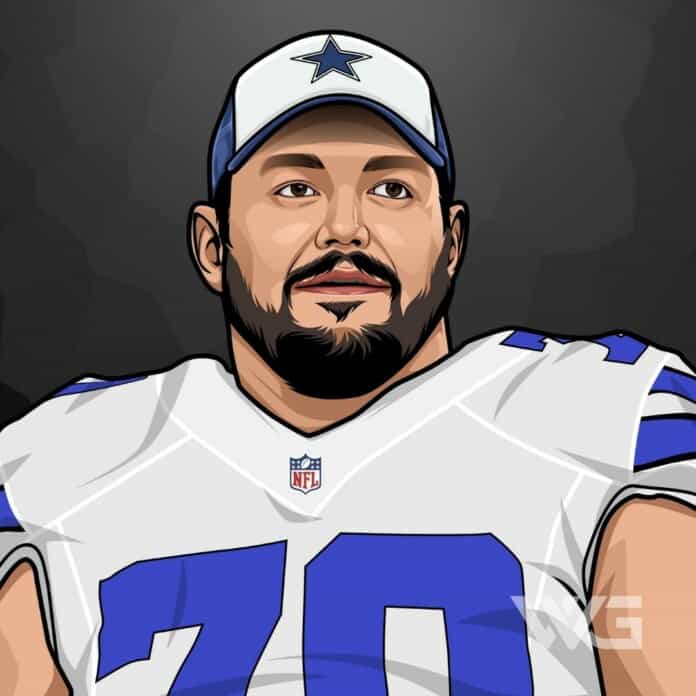 What is Zack Martin’s net worth?

He plays for the Dallas Cowboys of the NFL. Martin played college football at Notre Dame and was drafted 16th overall by the Cowboys in the first round of the 2014 NFL Draft.

He has made six Pro Bowls and been selected to six All-Pro teams. He spent his entire elementary year from kindergarten through eighth grade at Saint Matthew Catholic School.

As of December 2022, Zack Martin’s net worth is estimated to be roughly $8 Million.

Zachary Edward Martin was born on the 20th of November, 1990, in Indiana.

Martin and his brother Nick spent their entire elementary years from kindergarten through eighth grade at Saint Matthew Catholic School in Indianapolis, Indiana.

Zack and Nick each enrolled their freshman year at Bishop Chatard High School in Indianapolis, Indiana. Considered a four-star recruit by Rivals.com, he has been rated the 22nd best offensive tackle in the nation.

He accepted a scholarship from Notre Dame over offers from Indiana, Kentucky, and Michigan.

In the 2014 NFL Draft, there was speculation that the Dallas Cowboys would select quarterback Johnny Manziel if he were available. Instead, the team had targeted linebacker Ryan Shazier, who ended up going to the Pittsburgh Steelers.

Martin was named to his third straight Pro Bowl and First-team All-Pro, both honors being shared with fellow Cowboy offensive linemen Travis Frederick and Tyron Smith.

In 2017, the Cowboys picked up the fifth-year option on Martin’s rookie contract. He was named to his fourth straight Pro Bowl alongside tackle Tyron Smith and center Travis Frederick for the fourth straight year.

The following year, Martin signed a six-year, $84 million contract extension with the Cowboys with $40 million guaranteed, making him the highest-paid guard in the NFL.

The same year, Martin became one of five offensive linemen to secure a Pro Bowl invitation in his first six seasons.

In 2019, he was one of five offensive linemen ever to secure a Pro Bowl invitation in each of their first six seasons, joining Lou Creekmur, Jon Morris, Joe Thomas, and Richmond Webb.

The following year, in Week 11, he made his first career start at right tackle due to injuries across the offensive line. On December 7, 2020, Martin was placed on an injured reserve with a calf strain.

Here are some of the best highlights of Zack Martin’s career:

“It’s just something I’ll have to deal with, and it’s nothing serious. It’s one of those little nagging things you’ve got to keep an eye on and keep treating through the rest of the season. …I was pretty sure that I just re-aggravated what I did a couple of weeks ago in Washington.” – Zack Martin

“It felt similar, so I was able to come back here and get re-examined, tape it up, and tighten the brace up a little bit.” – Zack Martin

“I was a little bit, but not too bad. My last game was about three weeks ago. We’ve been doing stuff down where I train in Florida, working on technique and stuff like that. I was a little rusty in a few areas, but today was a nice first day.” – Zack Martin

“Just little techniques to pick up. Coach Mike Tice has been around a long time and has been a head coach. He is a great person to get to know and get some exposure to. He’s been doing it a long time. Picking up tips from him is very helpful.” – Zack Martin

“In college, we were a big power and zone team. I didn’t get much exposure to man, so I’ll keep working on that. We’re doing some of that this week, and I enjoyed doing all of it.” – Zack Martin

Now that you know all about Zack Martin’s net worth and how he achieved success; let’s take a look at some of the lessons we can learn from him:

Go and get your things. Dreams mean work.

No struggle, no progress, no success.

How much is Zack Martin worth?

Zack Martin’s net worth is estimated to be $8 Million.

How old is Zack Martin?

How tall is Zack Martin?

Zack Martin is a professional American football offensive guard for the Dallas Cowboys.

He has made six Pro Bowls and been selected to six All-Pro teams. Martin is considered to be one of the best offensive guards in the league. He married his wife in 2016, and they have a son and a daughter together.

As of December 2022, Zack Martin’s net worth is estimated to be roughly $8 Million.

What do you think about Zack Martin’s net worth? Leave a comment below.