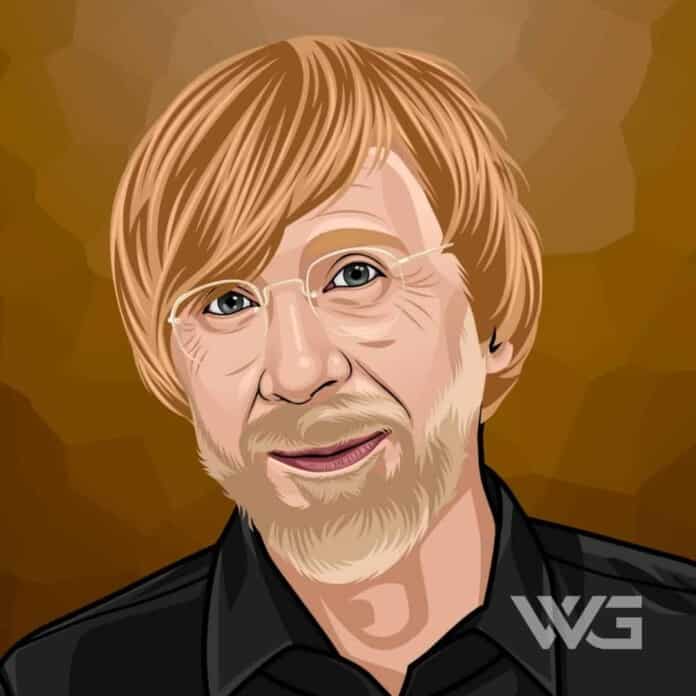 What is Trey Anastasio’s net worth?

Trey Anastasio is an American guitarist, singer, and composer.

Anastasio is best known for being the lead vocalist of the rock band Phish, which he co-founded in 1983. Anastasio is credited by name as composer of 152 Phish original songs.

In addition to his work with Phish, he had released 11 solo albums. He has been part of many side projects, including the Trey Anastasio Band, Oysterhead, Ghosts of the Forest, and Surrender to the Air.

Ernest Joseph “Trey” Anastasio III was born on the 30th of September, 1964, in Fort Worth, Texas.

Anastasio moved to Princeton, New Jersey. His father was an executive vice president, and his mother was a children’s book author. He grew up with his sister Kristy.

Anastasio attended Princeton public schools through fourth grade. He graduated from the Taft School and Steven Pollak, who later helped pen such Phish compositions as Suzy Greenberg, Fluffhead, Run Like An Antelope, Slave to the Traffic Light, and Dinner and a Movie.

Anastasio is a multi-instrumentalist, and he has released over a dozen of albums with Phish. He has been featured in many works with other artists.

He was born in Forth Worth, Texas, and he graduated from The Taft School, where he formed his first two bands. Anastasio met his Phish bandmates at the University of Vermont.

Phish played their debut show in 1983 for an ROTC dance. Anastasio has been the lead singer and lead guitar player for Phish since its start. Phish is known for their live shows and improvisation, also known as a jam band.

The band’s 12th album ‘Fuego’ was released in 2014 and was very popular. He formed the Trey Anastasio Band in 1998, and the band includes a horn section.

Since then, he has released an additional 10 studio albums solo or with TAB. He has become known for his orchestral work, performing with the New York Philharmonic and many other symphonies.

He studied composition in college, and he is known for his incredible guitar work. Anastasio has been nominated for a Tony Award for “Best Score”.

Here are some of the best highlights of Trey Anastasio’s career:

“There is no Jerry Garcias coming down the pike, any more than there is a Jimi Hendrix or Bob Marley. They are all at the same level – the highest level that you strive to get to as a musician. Me and my friends – we’ll all be long dead, people will still be trying to dig into what Jerry Garcia did.” – Trey Anastasio

“Music is a spiritual expression of what’s in your heart. Music as a way of getting rich is a pretty new thing, and I often wonder if the mega-bucks glitzy atmosphere is making the quality of music suffer. You have to work really hard to get around that and remember why you’re in it in the first place: because you have to be.” – Trey Anastasio

“Things have gone beyond my wildest expectations and dreams, and I feel like I’ve been given so many blessings in my life, between my friendship with the guys in the band, our wonderful audience, being able to play this music, and then my family.” – Trey Anastasio

“I feel a great responsibility to deliver for our audience … I am like their servant, but there’s only one honest way to lift people up, which is to feel genuinely elevated yourself. And the way to do that is to follow your heart. That’s all we try to do.” – Trey Anastasio

“I’ve learned that in the theater the story is everything. Every lyric, every line, and every musical gesture has to propel the journey of a given character or the overall plot.” – Trey Anastasio

Now that you know all about Trey Anastasio’s net worth and how he achieved success; let’s take a look at some of the lessons we can learn from him:

Equality implies individuality. Some of the values that we all should stand for are honesty, equality, kindness, compassion, treating people the way you want to be treated, and helping those in need. Those are traditional values.

Set the gearshift for the high gear of your soul. You’ve got to run like an antelope out of control!

As long as your intention is pure, and you know what you’re in it for, then you’re alright.

How much is Trey Anastasio worth?

Trey Anastasio’s net worth is estimated to be $85 Million.

How old is Trey Anastasio?

How tall is Trey Anastasio?

Trey Anastasio is an American musician who is the lead guitarist and primary songwriter for the band Phish. He has composed or co-composed over 150 songs. Since co-founding the band Phish in 1983, he has explored a wide variety of musical pathways.

He has worked with the likes of Tom Marshall, Les Claypool, Philip Glass, and Stewart Copeland. He then started to focus on many other projects, including Oysterhead and his eight-piece solo band.

What do you think about Trey Anastasio’s net worth? Leave a comment below.