Clint Eastwood has to be one of my favorite actors of all time, and he’s now 86 years old! Can you believe it?

Eastwood is an American actor and filmmaker, known for his appearances in many famous western movies. Here’s a few of the greats:

Check out our boasting collection of 75 motivational Clint Eastwood quotes:

1. “Actors know, with me they aren’t going to be allowed to rehearse a scene for a couple of hours and then get away with doing 25 takes before we get it right. So they come with their full bag of tricks.” – Clint Eastwood

3. “I guess maybe when you get past 70, other people start asking you how you feel.” – Clint Eastwood

4. “I keep working because I learn something new all the time.” – Clint Eastwood

5. “I’m a mentor to anybody who’s interested.” – Clint Eastwood

7. “If a person doesn’t change, there’s something really wrong with him.” – Clint Eastwood

8. “It takes tremendous discipline to control the influence, the power you have over other people’s lives.” – Clint Eastwood

9. “My dad was fiscally conservative, and I was influenced by that. He didn’t believe in spending more than you had because it gets you into trouble.” – Clint Eastwood

“Society has made us believe you should look like an 18-year-old model all your life.” – Clint Eastwood

11. “There has to be something in every role that interests you.” – Clint Eastwood

13. “You always want to quit while you are ahead. You don’t want to be like a fighter who stays too long in the ring until you’re not performing at your best.” – Clint Eastwood

14. “I Don’t believe in pessimism. If something doesn’t come up the way you want, forge ahead. If you think it’s going to rain, it will.” – Clint Eastwood

17. “God gave you a brain. Do the best you can with it. And you don’t have to be Einstein, but Einstein was mentally tough. He believed what he believed. And he worked out things. And he argued with people who disagreed with him. But I’m sure he didn’t call everybody jerks.” – Clint Eastwood

“I like working. That’s when I’m feeling my best. And the people around me know that. My wife knows that.” – Clint Eastwood

20. “I’m a movie maker, but I have the same feelings as the average guy out there.” – Clint Eastwood

21. “I’ve always felt that if I examine myself too much, I’ll find out what I know and don’t know, and I’ll burst the bubble. I’ve gotten so lucky relying on my animal instincts, I’d rather keep a little bit of the animal alive.” – Clint Eastwood

22. “If you ever go to a music session, you’ll notice that the musicians can sit down and start playing right away, and everyone knows what to do. Of course they’re reading it, but the conductor can tweak little things, and you can take that back to directing motion pictures.” – Clint Eastwood

24. “My whole life has been one big improvisation.” – Clint Eastwood

25. “Some people feel that the world owes them a living.” – Clint Eastwood

28. “You can’t stop everything from happening. But we’ve gotten to a point where we’re certainly trying. If a car doesn’t have four hundred air bags in it, then it’s no good.” – Clint Eastwood 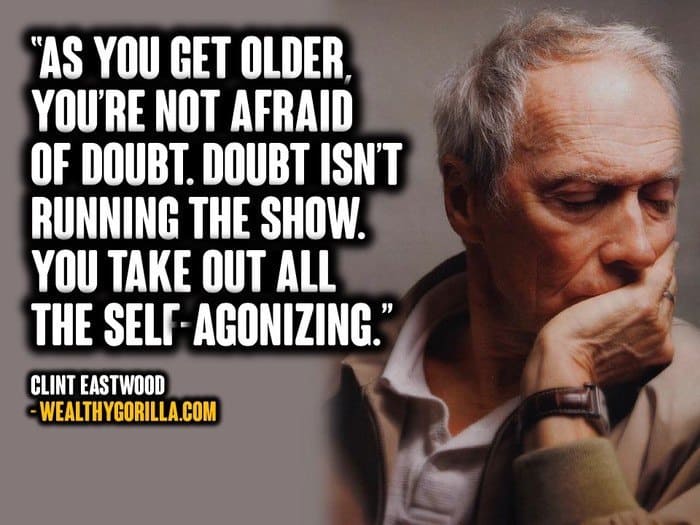 29. “As you get older, you’re not afraid of doubt. Doubt isn’t running the show. You take out all the self-agonizing.” – Clint Eastwood

32. “I always liked characters that were more grounded in reality.” – Clint Eastwood

34. “I probably would have retired years ago if I hadn’t found interesting things to do.” – Clint Eastwood

35. “I’m interested in the fact that the less secure a man is, the more likely he is to have extreme prejudice.” – Clint Eastwood

38. “It’s always appealing to play a character that has to overcome himself as well as an obstacle. It makes the drama so much deeper.” – Clint Eastwood

39. “Nobody looks like they did when they were 20, so why not take advantage of the fact that you’re changing, emotionally as well as physically?” – Clint Eastwood

“Sometimes if you want to see a change for the better, you have to take things into your own hands.” – Clint Eastwood

41. “There’s no real excuse for being successful enough as an actor to do what you want and then selling out. You do it pure. You don’t try to adapt it, make it commercial.” – Clint Eastwood

43. “You have to feel confident. If you don’t, then you’re going to be hesitant and defensive, and there’ll be a lot of things working against you.” – Clint Eastwood

44. “Every story has its demands.” – Clint Eastwood

45. “I’ve always been very liberal when it comes to people thinking for themselves.” – Clint Eastwood

46. “Every movie I make teaches me something. That’s why I keep making them.” – Clint Eastwood

47. “I don’t believe in pessimism. If something doesn’t come up the way you want, forge ahead. If you think it’s going to rain, it will.” – Clint Eastwood 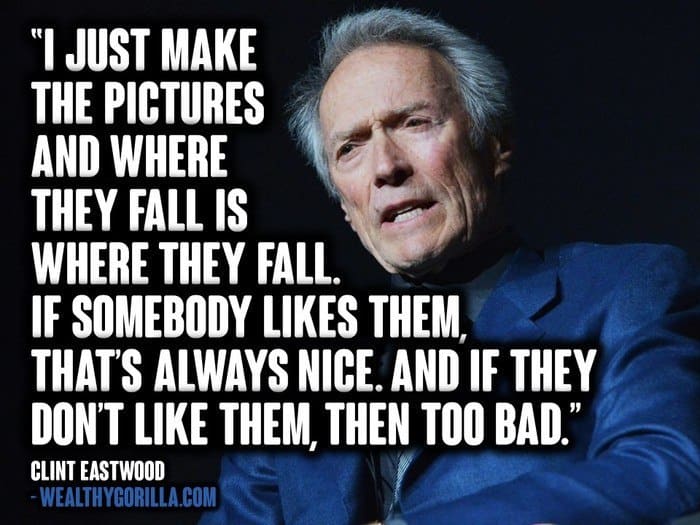 48. “I just make the pictures and where they fall is where they fall. If somebody likes them, that’s always nice. And if they don’t like them, then too bad.” – Clint Eastwood

49. “I think kids are natural actors. You watch most kids; if they don’t have a toy, they’ll pick up a stick and make a toy out of it. Kids will daydream all the time.” – Clint Eastwood

55. “The guys who won World War II and that whole generation have disappeared, and now we have a bunch of teenage twits.” – Clint Eastwood

56. “There’s only one way to have a happy marriage and as soon as I learn what it is I’ll get married again.” – Clint Eastwood

58. “You have to steal a lot. You have to have a criminal mentality to be a film director.” – Clint Eastwood

60. “If I was not a dreamer, I would have achieved nothing.” – Clint Eastwood

61. “Everybody accuses me of moving fast when I direct a picture. I don’t move fast, but I just keep moving.” – Clint Eastwood

“I guess I’m living in the present more than the past.” – Clint Eastwood

63. “I just think it is important that you realize, that you’re the best in the world. Whether you are a Democrat or Republican or whether you’re libertarian or whatever, you are the best. And we should not ever forget that. And when somebody does not do the job, we got to let them go.” – Clint Eastwood

66. “I’ve taken advantage of a few breaks that came along and moved along with them.” – Clint Eastwood

69. “Self-respect leads to self-discipline. When you have both firmly under your belt, that’s real power.” – Clint Eastwood

70. “The less secure a man is, the more likely he is to have extreme prejudice.” – Clint Eastwood

71. “We are like boxers, one never knows how much longer one has.” – Clint Eastwood

72. “Whether you like it or not, you’re forced to come to the realization that death is out there. But I don’t fear death, I’m a fatalist. I believe when it’s your time, that’s it. It’s the hand you’re dealt.” – Clint Eastwood

73. “You should never give up your inner self.” – Clint Eastwood

75. “Man becomes his most creative during war.” – Clint Eastwood

Which are your favorite Clint Eastwood quotes? Leave a comment below.

What is Robin Quivers' net worth? Introduction As of ,...