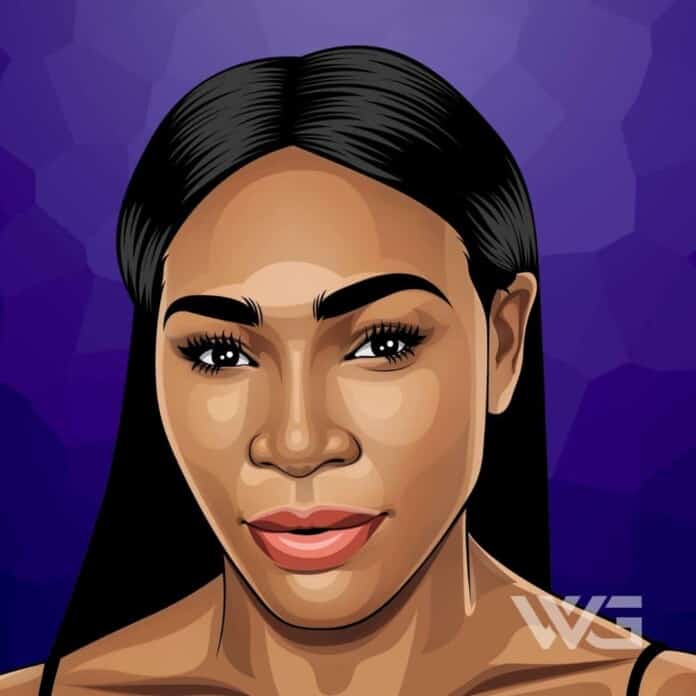 What is Serena Williams’ net worth?

As of December 2022, Serena Williams’ net worth is estimated to be roughly $210 Million, and she is one of the richest tennis players in the world.

Serena Jameka Williams is an American professional worldwide tennis player, from Michigan. Her talent for the sport was first recognized when she attended the tennis academy of Rick Macci, at the age of 3. Williams also got recognized for her unique playing style.

She has recently made a career comeback after taking a break due to her pregnancy.

Serena Jameka Williams was born in Saginaw, Michigan on 26th September 1981. She moved with her parents and her four sisters to Compton, California at the age of 3. Williams has three sisters and three brothers from her father’s earlier marriage.

Her father homeschooled her and her sister, Venus. When Williams was 9 the family moved from Compton to West Palm Beach in Californa so she could attend a tennis academy.

Her father pulled Williams out from the tennis academy when she was in ninth grade so he could coach her at their home; and he wanted her to focus more on school and tennis.

Serena and her older sister Venus Williams have been taught since they were kids how to play tennis by their father.

The sister’s famous signature style and play changed the look of the sport, and their sense of power, style, and presence made the sisters stand out from all the other tennis players.

Venus and Serena lived together for more than a dozen years in Palm Beach Gardens.

In 1999, Serena beat her sister Venus in their race to the family’s Grand Slam win. In 2008 Serena and Venus teamed up in the Beijing Games, where they took home a gold medal.

At the 2012 summer Olympics Williams got her fourth Olympic gold medal. At the 2015 U.S, Open Serena teamed up with her sister again. Everyone thought they make a perfect team, and they won the 2016 doubles championship, after their sixth Wimbledon game together.

A historic victory took place when Williams won her 23rd Grand Slam title after defeating Venus. After her win, she took the number one world ranking. Serena made a speech after her victory, where she quoted:

Here are some of the best highlights of Serena Williams’ career:

“Growing up I wasn’t the richest, but I had a rich family in spirit. Standing here with 19 championships is something I never thought would happen. I went to a court just with a ball and a racket and with a hope.” – Serena Williams

“With a defeat, when you lose, you get up, you make it better, you try again. That’s what I do in life, when I get down, when I get sick, I don’t want to just stop. I keep going and I try to do more. Everyone always says never give up but you really have to take that to heart and really do never definitely give up. Keep trying.” – Serena Williams

“Luck has nothing to do with it because I have spent many, many hours, countless hours, on the court working for my one moment in time, not knowing when it would come.” – Serena Willams

“The success of every woman should be the inspiration to another. We should raise each other up. Make sure you’re very courageous: be strong, be extremely kind, and above all be humble.” -Serena Williams

“Family’s first, and that’s what matters most. We realize that our love goes deeper than the tennis game.” – Serena Williams

View our larger collection of the best Serena Williams quotes!

Now that you know all about Serena Williams’ net worth, and how she achieved success; let’s take a look at some of the lessons we can learn from her:

1. Age is only a mindset

By the time most athletes reach an older age, they admit their best days are behind them. Your age is only a mindset, don’t place limits on yourself because of how old or young you are.

Fighting towards your goals can be an upward battle, especially when you don’t see the results right away. The important thing is not to give up just because the odds don’t work. As long as there’s still time on that clock, you’re still in the fight.

If you want to become the best at what you do, the focus is the key. The best thing is to develop the right focus and keep having a passion for what you’re doing.

How much is Serena Williams worth?

Serena Williams’ net worth is estimated to be $250 Million.

How old is Serena Williams?

How tall is Serena Williams?

Serena Williams is one of the most successful female tennis players of all time, with over 23 Grand Slams won throughout her career.

Serena Williams’ net worth is estimated to be roughly $250 Million.

What do you think about Serena Williams’ net worth? Leave a comment below.

What is Liza Koshy's net worth? Introduction As of ,...