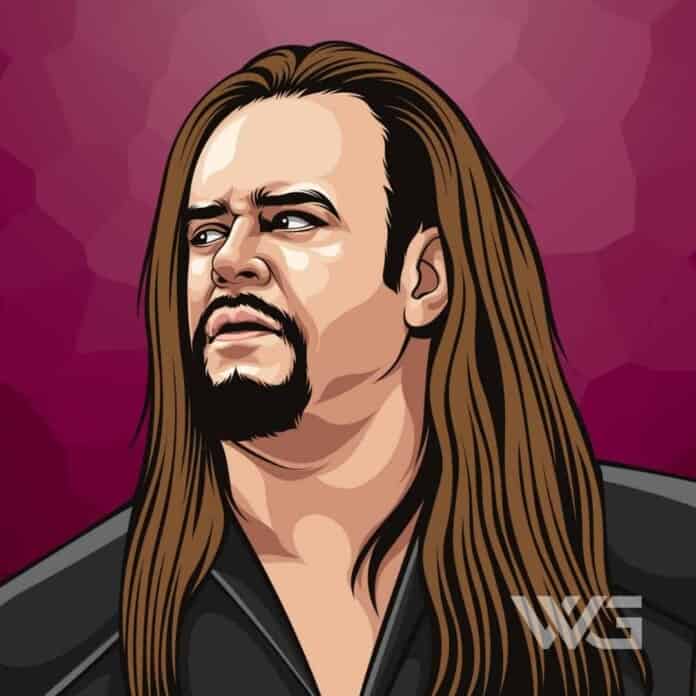 What is The Undertaker’s net worth?

As of December 2022, The Undertaker’s net worth is approximately $17 Million.

Calaway is the son of Frank Compton Calaway and Betty Cathrine Truby. He attended Waltrip High School where he was a member of the football and basketball teams.

In 1985, Calaway enrolled in Texas Wesleyan University in Fort Worth, Texas. In 1986, Calaway dropped out of university to focus on a career in sports, and he briefly considered playing professional basketball in Europe before deciding to focus on professional wrestling.

After joining the WWF he adopted the name Kane the Undertaker and made his official on-camera debut on November 22, 1990, at Survivor Series as a heel when he was the mystery partner of Ted DiBiase’s Million Dollar team.

In the late 1990s, The Undertaker suffered from a groin injury which led to him taking some time of from wrestling. He made his comeback in the early 2000s in a new avatar—he abandoned the mortician-themed attires of the past and took on a biker’s identity.

Along with his wrestling career, he has also appeared in some films including the 1991 film, ‘Suburban Commando’ and the 1999 film ‘Beyond the Mat’.

Here are some of the best highlights of The Undertaker’s career:

Favorite Quotes from The Undertaker

“The fear of death is far greater than the death itself. But the fear of the unknown is the greatest fear of all!” – The Undertaker

“The Attitude Era was so great because you had the best collection of superstars of any one time period. You had The Rock, Stone Cold, Undertaker, Mick Foley.” – The Undertaker

“The only time I had an ego is I when wanted to have a reverse Undertaker record at WrestleMania, and they messed it up!” – The Undertaker

“Getting to work with The Undertaker right off the bat was a tremendous opportunity. It was an opportunity to be a career-maker, and fortunately, I was able to take advantage of that.”  – The Undertaker

“Failure should be our teacher, not our undertaker. Failure is a delay, not defeat. It is a temporary detour, not a dead end. Failure is something we can avoid only by saying nothing, doing nothing, and being nothing.” – The Undertaker

“Had the WWE fights were artificial and pre-scripted, there would have been no need for wrestlers like The Great Khali and The Undertaker. You cannot fool thousands of people crammed into a stadium and sitting four to five feet away from you in the ring.” – The Undertaker

3 Lessons from The Undertaker About Hard Work

Now that you know all about The Undertaker’s net worth, and how he achieved success; Let’s take a look at some of the strongest lessons we can learn from him about hard work:

We never know when we will no longer be here so enjoy the moment right now because the next one might not happen.

On their death bed, no one ever said that they wished they worked more hours. What they do say is that they wish they had spent more time with their friends and loved ones.

When you’re confident, you project it onto others and it makes them more comfortable to work with you. It also makes them feel confident that you will get the job done.

How much is The Undertaker worth?

The Undertaker’s net worth is estimated to be $17 Million.

How old is The Undertaker?

How tall is The Undertaker?

The Undertaker is an American professional wrestler who is a four-time WWF/E Champion and a three-time World Heavyweight Champion. He is considered to be one of the most popular wrestlers in the world today.

What do you think about The Undertaker’s net worth? Leave a comment below.