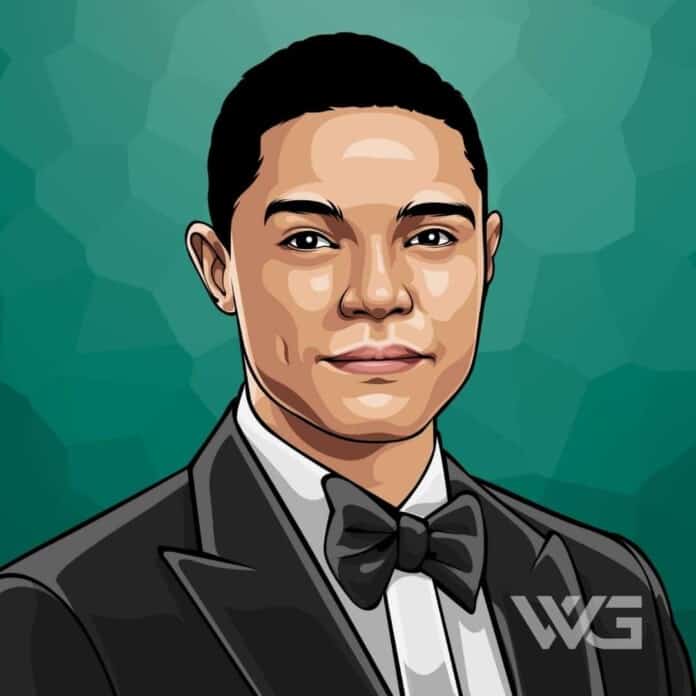 What is Trevor Noah’s net worth?

As of November 2022, Trevor Noah’s net worth is estimated to be roughly $100 Million.

Trevor Noah is a South African comedian, writer, actor, and television host from Soweto, South Africa. He is known for hosting The Daily Show, an American satirical news program on Comedy Central.

Trevor Noah was born on the 20th of February, 1984, in Soweto, South Africa. Noah is the son of a black Xhosa mother and a white Swiss-German father.

Nonetheless, Noah’s parents secretly maintained their relationship for a time. Some of his experiences growing up would become the subject of Noah’s comedic work, which would often look at the racial dynamics of his native country.

Trevor Noah began his career when he initially had a minor role in an episode of a South African TV program called ‘Isidingo.’ He then started hosting his own radio show titled ‘Noah’s Ark’ on YFM.

Soon after, Noah went on to host the educational TV program ‘Run The Adventure’ on SABC 2. In 2007, he served as the host of ‘The Real Goboza’, a gossip-themed talk show on SABC 1.

He next starred in the comedy show ‘Trevor Noah: The Racist’.

In 2012, he appeared in the movie ‘Mad Buddies’. Two years later, he became a recurring contributor on the late-night talk and news satire program ‘The Daily Show with Jon Stewart’.

Noah has performed all over his native South Africa as a comedian in events and programs like ‘The Blacks Only Comedy Show,’ the ‘Vodacom Campus Comedy Tour,’ the ‘Heavyweight Comedy Jam,’ the ‘Cape Town International Comedy Festival,’ ‘Bafunny Bafunny’ and the ‘Jozi Comedy Festival.’

Here are some of the best highlights of Trevor Noah’s career:

“In my world, a woman was the most powerful thing that I knew. Still is. A woman made the money in my house; a woman made my food. Women were behind a lot of what spurred South Africa toward democracy.” – Trevor Noah

“I’ve come to learn as an adult that love is a hell of a drug. It’s one of the most dangerous things that human beings can have. It’s also one of the most beautiful things that human beings can possess because love, on one hand, gives you the ability to care for a human being sometimes more than you would care for yourself. Love, unfortunately, sometimes gives you the ability to forgive somebody and blind yourself to the truth.” – Trevor Noah

“As an outsider myself, I always mixed myself with different groups…I’ve never been afraid to go into a different space and relate to those people because I don’t have a place where I belong and that means I belong everywhere.” – Trevor Noah

“Comedy is a great tool. We [comics] are trying to find ways to use humor to enlighten people without preaching to them.” – Trevor Noah

“I speak English, obviously, Afrikaans, which is a derivative of Dutch that we have in South Africa. And then I speak African languages. So I speak Zulu. I speak Xhosa. I speak Tswana. And I speak Tsonga. So I’m trying to make that officially my seventh language. And then, hopefully, I can learn Spanish.” – Trevor Noah

View our larger collection of the best Trevor Noah quotes!

Now that you know all about Trevor Noah’s net worth, and how he achieved success; let’s take a look at some of the lessons we can learn from him:

1. People Will Listen If You Speak Their Language

Noah is biracial — his father is white and his mother is black. This made his early life complicated as he grew up in post-Apartheid South Africa.

While on a walk one day, Noah overheard a group of guys says, in their native tongue, that they wanted to mug the light-skinned guy. Noah then started speaking to them in their language, and they all became chummy.

2. Stay True To Yourself

During Noah’s elementary school days, classes were split into two groups: one for whites and some groups of minorities (which included Indians, Asians and mixed children) and another for black kids.

Feeling more comfortable with his black peers, Noah chose the “B class” against the warnings of his teacher.

3. Think Beyond Your Current Circumstances

Apartheid made certain activities, such as skating, nearly impossible for black people in South Africa, but Noah’s optimistic mother, Patricia, didn’t let oppression stop her from showing her son the “things for white people.”

How much is Trevor Noah worth?

Trevor Noah’s net worth is estimated to be $100 Million.

How old is Trevor Noah?

How tall is Trevor Noah?

Trevor Noah is best known for hosting Comedy Central’s ‘The Daily Show’ since September 2015. He is one of the most sought-after hosts in the entertainment industry.

What do you think about Trevor Noah’s net worth? Leave a comment below.