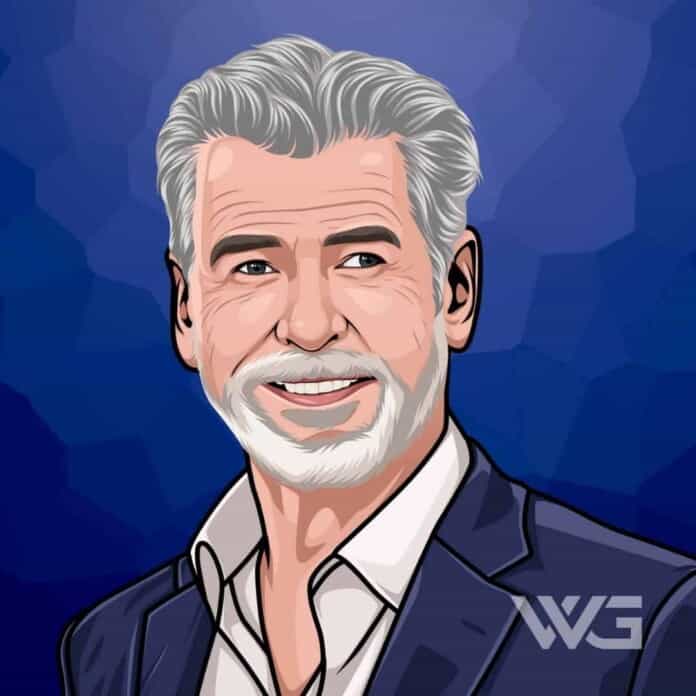 What is Pierce Brosnan’s net worth?

Brosnan is best known as the fifth actor to play secret agent James Bond in the Bond film series. He has starred in four films from 1995 to 2002.

Some of the movies he has starred in include ‘GoldenEye,’ ‘Tomorrow Never Dies,’ ‘The World Is Not Enough,’ and ‘Die Another Day’.

He began training in commercial illustration and attended the Drama Centre in London for three years.

Brosnan is the only child of May and Thomas Brosnan. For 12 years, he lived in Navan. His father abandoned the family when he was an infant.

When Brosnan was 4 years old, his mother moved to London to work as a nurse. He was largely brought up by his maternal grandparents. After their deaths, he lived with his aunt. He never knew his father. He suffered growing up being an Irish Catholic to have a marriage that was not there.

The film ‘Golden Eye’ earned him a Saturn Award nomination for “Best Actor”.

In 1997, Brosnan starred in ‘Robinson Crusoe’ as the lead role. He later starred in ‘Dante’s Peak,’ ‘Quest for Camelot’ and ‘The Nephew’. Through other Bond films, he has won an Empire Award for “Best Actor”.

Brosnan starred alongside Meryl Streep in the film adaption of the Abba musical movie ‘Mamma Mia!’. He has also starred in the movies ‘The Greatest, Percy Jackson & the Lightning Thief,’ ‘The Ghost,’ ‘Remember Me,’ ‘The World’s End,’ ‘A Long Way Down,’ ‘The November Man,’ ‘Lessons in Love,’ ‘Survivor,’ ‘No Escape,’ ‘A Christmas Star’.

In 1997, he received a star on the Hollywood Walk of Fame. In 2003, Queen Elizabeth II made Brosnan an honorary Office of the Order of the British Empire. As an Irish citizen he was not able to receive a full knighthood.

Brosnan earned $4 million for 1995’s ‘Goldeneye.’ That’s the same as around $7 million today after adjusting for inflation. He then earned $8.2 million for ‘Tomorrow Never Dies’.

How Does Pierce Brosnan Spend His Money?

In 1996, he got himself a home in Malibu. He sold this house in 2012. In 2000, he bought the beachfront property in Malibu. Over various summers, Pierce and Keely Smith rented the house the summer months for $250,000 per month.

In 2019, they spent $2.4 million on a relatively modest home in Santa Monica, California. They also own a multi-home compound on the Hawaiian island of Kauai near Anini Beach.

Brosnan owns an amazing car collection. Some of his notable cars include a Ford F-150, an Aston Martin V12 Vanquish, a Range Rover Vogue HSE, a BMW 750i, a BMW i8, and a Ford Anglia.

Here are some of the best highlights of Pierce Brosnan’s career:

“Love means that everything is right with the world. It means that you are content within your own heart and in the presence of the person that you love, who fills your day and makes you stronger and wiser and gives you the confidence to go out into the world. Love is just the most beautiful, joyous feeling.” – Pierce Brosnan

“Must whales and dolphins be subjected to deafening noise that will cause more than 3.5 million instances of temporary and/or permanent hearing loss? For species that depend on hearing for survival – to find food, migrate, and communicate – any hearing loss could be catastrophic. As one scientist noted, a deaf whale is a dead whale.” – Pierce Brosnan

“I’m very confident that Nick Hornby always gets it right as a writer. He has the vernacular and passion. He is adroit and dry, and balances humor with the humanity of life.” – Pierce Brosnan

“When you go through a long illness, certainly one of cancer, there’s a certain release from it and relief that it has come to an end, because the suffering can be unbearable, as opposed to an abrupt stop to life when they go out the door and there’s a loved one who never comes home because of some accident.” – Pierce Brosnan

“As I’ve gotten older and I’ve watched people in productions, I go to the theater when I go back to London and see friends in Broadway. I think maybe there might come a time here to get back up there and prove oneself. It’s just an itch; it’s a nagging itch to go back there.” – Pierce Brosnan

Now that you know all about Pierce Brosnan’s net worth and how he achieved success; let’s take a look at some of the lessons we can learn from him:

Together we are stronger, our voices louder, and the synergy of our actions more powerful. Together we can prevail on the Navy to put commonsense safeguards in place.

You can get totally messed up trying to please everyone with what you do, but ultimately, you have to please yourself.

How much is Pierce Brosnan worth?

Pierce Brosnan’s net worth is estimated to be $200 Million.

How old is Pierce Brosnan?

How tall is Pierce Brosnan?

Pierce Brosnan is an Irish actor who was born in Drogheda, Ireland.

Brosnan is best known for starring James Bond in the movies ‘Golden Eye,’ ‘Tomorrow Never Dies,’ ‘The World Is Not Enough,’ and ‘Die Another Day.’ He has starred in dozens of movies, perhaps most notably ‘Mrs. Doubtfire,’ and several TV movies: ‘The Heist,’ ‘Murder 101,’ ‘Victim of Love,’ ‘Death Train,’ ‘Don’t Talk to Strangers,’ and ‘Night Watch.’

What do you think about Pierce Brosnan’s net worth? Leave a comment below.