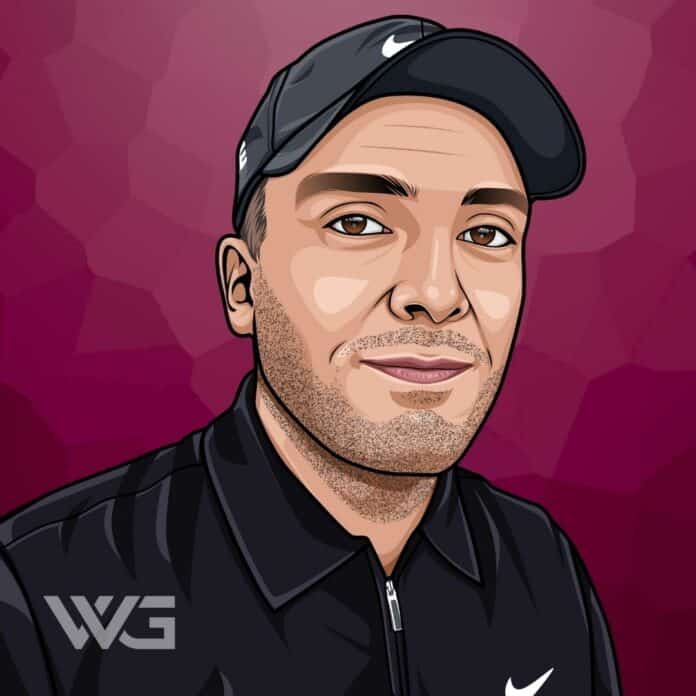 What is Francesco Molinari’s net worth?

Francesco Molinari is an Italian professional golfer who has won many championships, most notably the 2018 Open Championship.

Consistently ranked in the top 100 best golfers in the world, he’s enjoyed many victories on the European Tour and other cups and championships.

As of February 2023, Francesco Molinari’s net worth is estimated to be $20 Million.

Francesco Molinari was born November 8, 1982, in Turin, Italy, where he was raised with his younger brother Edoardo Molinari.

In 2004, Molinari won the Italian Match Play Championship, with the victory paving the way for his career as a professional golfer the same year.

After successfully passing through qualifying school, Francesco Molinari earned his European Tour card, finishing in 86th place in his rookie season with the Order of Merit in 2005.

The following year he won his first European Tour at the Telecom Italia Open, placing him on the Official World Golf Ranking for the first time.

Additional victories at the WGC-HSBC Champions in Shanghai, moved him further up the world rankings continuously, reaching 14th position in 2010.

He then played in Dubai, one of the most futuristic cities in the world, at the Race to Dubai in 2011, followed by another European Tour win the following year.

During the same tournament, he also won his singles match against Phil Mickelson, winning the season-long Race to Dubai title the same year.

His net worth has been enhanced with endorsement deals, including for the makers of the most expensive sneakers in the world, Nike.

Francesco Molinari’s championship victories have pushed him into the ranks of the richest golfers in the world, with more success likely to come.

His 2018 Race to Dubai title on the European Tour earned him a cool $1,250,000, with ongoing sponsorship deals ensuring growth for his career earnings from year to year.

With his career still going strong, Molinari’s overall income will increase as more endorsement deals and championships head his way.

While Molinari has some way to go to compete with some of the richest athletes in the world, his net worth is nevertheless impressive.

His net worth saw its biggest growth between 2006 and 2018, during which time he won several international championships and trophies for his exceptional performances.

Future tournaments and ongoing sponsorships with leading brands such as Titleist will undoubtedly contribute to Molinari’s net worth in the following years.

Francesco Molinari currently resides in Los Angeles with his wife and children, son Tomasso and daughter Emma, where he moved to in 2018.

He is a supporter of Aston Villa, one of the richest soccer teams in the world, as well as the Italian team Internazionale.

Molinari maintains a solid presence on social media through his official Instagram account, which has half a million followers.

Francesco Molinari’s career has seen the Italian golfer pick up many championships and trophies in a short period of time.

He’s the only Italian professional golfer to win a victory at a major, as well as several world cups and other tournaments.

Here are some noteworthy awards and achievements from Francesco Molinari’s career:

With a promising career still unfolding, we can anticipate many more victories for Francesco Molinari in the years to come.

How Does Francesco Molinari Spend His Money?

Francesco Molinari’s impressive net worth has allowed him to move to Los Angeles with his family after residing in Italy and England.

He uses some of the most expensive golf balls in the world, Titleist Pro V1x balls, as well as TaylorMade clubs.

His car collection includes a BMW i8 hybrid sports car, which he was seen with while playing at the DP World Tour Championship at Jumeirah Golf Estates.

With many championships and trophies under his belt, Francesco Molinari has enjoyed a hugely successful career as a professional golfer.

This also includes consistent ranking on the top 100 of the World Rankings since 2008, solidifying his status as one of the current best golfers.

Here are some of the best highlights of Francesco Molinari’s career:

Molinari continues to play professionally and strike endorsement deals with major companies and has a strong chance of more tournament victories in the future.

While Molinari isn’t known for speaking to the media frequently, he has shared his thoughts on golf in rare interviews with the press.

He’s been particularly outspoken about his experiences dealing with the pandemic and how this has affected his ability to play golf.

Here are our favorite quotes from Francesco Molinari:

Now that you know all about Francesco Molinari’s net worth, we’ll see how his life experiences and ethos can help us improve our lives.

His dedication to training and developing his skills inspires anyone looking to become the best they can be in any domain.

Here are some of the best success lessons to learn from Francesco Molinari:

1. Always Give Something Back To Charities

Molinari isn’t afraid to share his wealth with a good cause, and has supported many charities over the course of his career.

He serves as an ambassador for the medical charity Borne, which works to identify the causes of premature birth.

2. To Become The Best You Need Total Dedication

When Molinari first started playing golf professionally, he failed to rank in the top 100, but perseverance led to his inclusion on the list for many consecutive years.

3. Put Your Family Before Everything Else

While success is certainly welcome, it shouldn’t come at the cost of family, and Molinari has been outspoken about putting his loved ones before his career.

That concludes this guide to Italian professional golfer Francesco Molinari’s net worth, covering the tournament victories that helped him rise through the ranks.

As Molinari’s impressive career unfolds, we can expect more trophies and lucrative endorsement deals to push his wealth further.

Make sure you check back on this article in the future, as we’ll update it to include all the latest facts and figures you need to know about Francesco Molinari.

As of February 2023, Francesco Molinari’s net worth is estimated to be $20 Million.

What do you think about Francesco Molinari’s net worth? Leave a comment below.

Find out how talented DJ, music journalist, record producer, and actor Questlove rose to fame and earned his fortune.