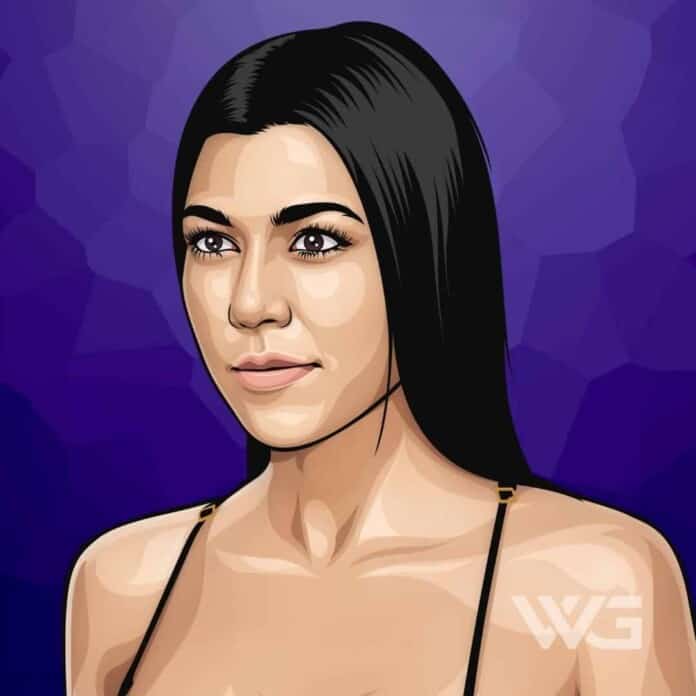 What is Kourtney Kardashian’s net worth?

As of February 2023, Kourtney Kardashian’s net worth is approximately $65 Million.

Kourtney Mary Kardashian is an American reality television star, businesswoman, model, and socialite from Los Angeles. She is mostly known for the highly successful reality show ‘Keeping Up With The Kardashians’.

Kourtney Mary Kardashian was born in Los Angeles, California, on the 18th of April, 1979. Kardashian is the oldest daughter of her mom Kris Jenner (whose mom is the famous transgender woman Caitlyn Jenner) and her dad late Robert Kardashian, and she has two younger sisters, Kim and Khloé, and one younger brother Robert.

Kourtney Kardashian started her early career when she first appeared on the reality series ‘Filthy Rich: Cattle Drive’. In 2007, Kourtney, Kim, and Khloé Kardashian, along with their family, appeared on the E!’s reality show ‘Keeping Up With The Kardashians.’ It showed their personal lives on television, including their private family conversations.

The show turned out to be highly successful, and she got enough fame from the show. The huge success of this show led to the production of its spin-offs: ‘Kourtney and Khloe Take Miami,’ and Kourtney and her sister Kim Kardashian Take New York. They aired in the years 2009 and 2011, respectively.

Kardashian later made her acting debut and portrayed the role of attorney ‘Kassandra Kavanagh’ in ABC’s television ‘One Life to Live.’ In 2014 she also starred in ‘Kourtney and Khloe Take the Hamptons.’

In 2015 Kourtney Kardashian starred in two episodes of ‘I Am Cait,’ where she also had a recurring role in the series ‘Dash Dolls’ the same year. Kardashian is also a successful entrepreneur, and along with her mother, Kris Jenner, they opened a children’s store, ‘Smooch’.

As of February 2023, Kourtney Kardashian’s net worth is $65 Million.

Disick and Kardashian’s relationship was a big part of the ‘Keeping Up With the Kardashians show. Fans were following their multiple spin-offs as well as Kortney’s pregnancies and the births of all three of her kids.

Kourtney also had a love affair with a popular model Younes Bendjima from 2016 to 2020. Since January 2021, Kardashian has been in a relationship with Travis Barker, who serves as the drummer for the rock band Blink-182. In October 2021, the couple got engaged after Travis proposed to her in Montecito, California. They officially married on May 15, 2022.

In 2014 together with Scott Disick, Kourtney spent $9 million to acquire 12,000-square-foot NFL star Keyshawn Johnson’s mansion in Calabasas. This is an absolute family home heaven with six bedrooms, a gourmet kitchen, and kids’ rooms galore, where Kourtney resides with her husband, Travis Barker.

In June 2021, Kourtney purchased a 9,335-square-foot home in La Quinta, California, for $12 million. The house is fully furnished with (again) six bedrooms and seven-and-a-half bathrooms. Its neutral tones of wood are a perfect match with the California desert.

The life of the most popular family in the world can’t leave anyone indifferent and remain without controversies. Here are a few of them.

The first controversy concerns the fight between Kourtney and her sister Kim Kardashian. One of the episodes of the year 2019 of ‘Keeping Up With The Kardashians’ turned into a real fight between two sisters, which involved lots of kicks and punches, and ended with Kim slapping Kourtney twice! It was a real drama.

Kardashian’s romantic life has also had its fair share of rocky moments. During a yacht trip to South France, Kourtney’s ex-husband Scott Disick was caught cheating on her with his ex-girlfriend Chloe Bartol. Celebrities’ lives can’t exist without dumb gossip, but someone photographed the star getting close to another woman.

In January 2019, a huge scandal occurred with Kourtney and Scott Disick’s second daughter Penelope. While dining at a Japanese restaurant, Penelope and her dad took a photo together in which Scott held chopsticks in his hand while his daughter pulled her

Here are some of the best highlights of Kourtney Kardashian’s career:

“Now that I have a daughter, I’ve been thinking about how I’ll define beauty to her. I watched a video of Kendall when she was three, and she was putting on makeup. I don’t know how I feel about that. But my daughter already watches me do it. When do you let them start wearing it? I don’t know yet.” – Kourtney Kardashian

“I’ve been applying makeup long enough to feel good doing it on my own, but I cannot do my hair to save my life. When left to my own devices, if I have to go to an event, I do a slicked bun. Otherwise, I just try to wear a hat, put it in a ponytail, or do a side braid – something easy.” – Kourtney Kardashian

“There’s no one else I would rather have as my manager than my mom because I know that she has our best interests at heart. Sometimes, it’s hard to separate manager mode from mom mode. I think as our manager, my mom will get more emotional about situations than she would if she was just our manager.” – Kourtney Kardashian

“I remember, when I went away to college at Southern Methodist University in Dallas, my aunt sent me a book with the rules of being a Southern Belle. One of the rules was to never wear white after Labor Day. Fashion has a lot to do with confidence and making up your own rules.” – Kourtney Kardashian

“Motherhood has most definitely changed me and my life. It’s so crazy how drastic even the small details change – in such an amazing way. Even silly things, like the fact that all of my pictures on my cell phone used to be of me at photo shoots – conceited, I know! – but now every single picture on my phone is of Mason.” – Kourtney Kardashian

How much is Kourtney Kardashian worth?

Kourtney Kardashian’s net worth is estimated to be $65 Million.

How old is Kourtney Kardashian?

How tall is Kourtney Kardashian?

Kourtney Kardashian, the eldest Kardashian sister, the daughter of Kris Jenner and Robert Kardashian, has worked hard to achieve her incredible net worth; through reality shows and her work as an executive producer in the shows.

As of February 2023, Kourtney Kardashian’s net worth is roughly $65 Million.

What do you think about Kourtney Kardashian’s net worth? Leave a comment below.