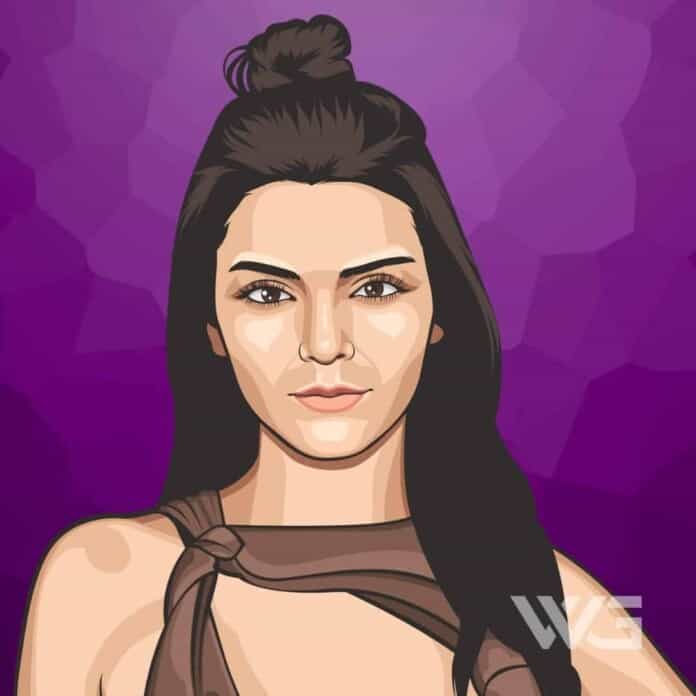 What is Kendall Jenner’s net worth?

As of February 2023, Kendall Jenner’s net worth is estimated to be roughly $45 Million.

Kendall Nicole Jenner is an American reality TV show star and supermodel. She initially gained recognition when she appeared in the famous reality show Keeping up with the Kardashians.

The show debuted on October 14, 2007, and has become one of the most popular TV shows in television history.

Kendall Nicole Jenner was born in Los Angeles, California on the 3rd November 1995. She is the daughter of a retired athlete champion, Caitlyn Jenner. Her mother, Kris Jenner is known for being a television personality.

Jenner grew up in a stepfamily with her younger sister Kylie Jenner, and with eight half-siblings. She was raised with siblings in Calabasas in Los Angeles, and attended Sierra Canyon School before she started her career as a professional worldwide model.

Jenner started her career as a model at the age of 14, when Wilhemina Models signed her on July 12, 2009. In December 2009 she had her first campaign with the clothing brand Forever 21, and a year later she featured in Teen Vogue.

In November 2012, Victoria’s Secret photographer Russell James teamed up with Jenner for joint projects and model work. After their work together she had covers Harper’s, Baazar Arabia and Miss Vogue Australia.

Jenner’s hard work had now become a big success for her and this was the reason for her direction to the high fashion world. She signed with The Society Management on November 21, 2013.

Jenner’s first bookings came from brands like Givenchy, Chanel, Tommy Hilfiger, and Balmain. In 2015 she walked for Vera Wang, Michael Kors, Marc Jacobs, and for Chanel.

In 2016 Kendall and Cara Delevingne were recreated as wax figures in Madame Tussaud’s in London.

Jenner began her reality television career in 2007. In 2010 she appeared in music videos, and also TV shows including Hawaii Five-0. She will make an appearance in the coming movie Oceans 8 where Rihanna also has a big part in the movie.

Kendall Jenner’s net worth is roughly $45 Million, and she is currently the world’s highest paid model.

Here are some of the best highlights of Kendall Jenner’s career:

“I was the biggest liar for no reason, and then as I got older, I thought, ‘Why am I lying to everybody?’ I would hear other people lie and be like, ‘You sound so stupid.’ So then I would just change my lies. The only person I lie to is my little sister when I steal her clothes.” – Kendall Jenner

“I’m always trying to be nice to my fans, but sometimes it’s hard because you’re human, and sometimes you have a bad day. Like if you’re getting into your car and you don’t say hi, all of a sudden you’re so mean. There is a balance, for sure.” – Kendall Jenner

“Sometimes I feel like a complete kid when I’m running around with my friends being stupid for a week, and then sometimes I just want to sit in my house and sip tea and watch old movies like I’m 60.” – Kendall Jenner

“I try not to be too invasive into my personal life. When I was younger, I used to tweet a lot, everything I was doing and feeling. I can’t do that anymore, because it’s just giving people too much room to judge.” – Kendall Jenner

View our larger collection of the best Kendall Jenner quotes!

Now that you know all about Kendall Jenner’s net worth, and how she achieved success; let’s take a look at some of the lessons we can learn from her:

1. Never let gossip get to you

We aren’t what people think, people say a lot of shit behind our backs and we never say anything. Just leave it alone, it will pass in one week.

People will talk, and be jealous. That will only make you work harder, and finally, you can prove to these people that its what I want to be doing.

3. The greatest reward? Being an inspiration to someone else

Being an inspiration to someone else can help people that don’t have any hope left. Just when we were kids, a role model can always help you get back on your feet again.

How much is Kendall Jenner worth?

Kendall Jenner’s net worth is estimated to be $45 Million.

How old is Kendall Jenner?

How tall is Kendall Jenner?

Kendall Nicole Jenner is one of top 15 most followed celebrities on Instagram, and top of the world’s highest-paid model list on Forbes. Jenner is only 22 years old right now, and people in the fashion and model industry do believe she will have a bright future and success.

Kendall Jenner’s net worth is estimated to be roughly $45 Million and there’s no doubt that this amount will continue to increase in the future for her.

What do you think about Kendall Jenner’s net worth? Leave a comment below.