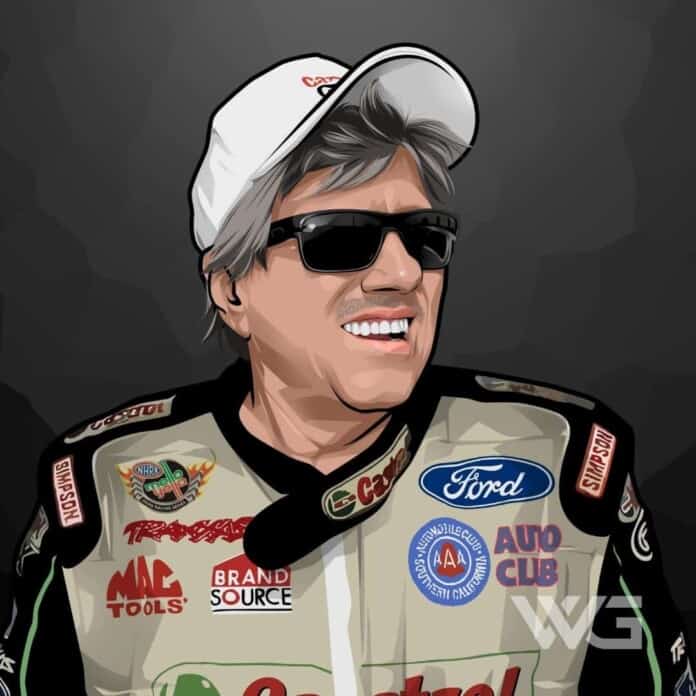 What is John Force’s net worth?

Force is a 16-time NHRA and 1-time AHRA Funny Car champion driver and a 21-time champion car owner. He owns and driver for John Force Racing. Before he made a career racing, he graduated from Bell Gardens High School and briefly attended Cerritos Junior College to play football.

John Harold Force was born on the 4th of May, 1949, in California. Force is the son of Harold and Betty Ruth Force. He survived childhood polio with therapy and perseverance of his mother and family.

Force played football in high school and attended Cerritos College. He is one of six children. John has five siblings- Walker, Louie, Tom (now deceased), and Cindy Hem were all older than John.

Force was born in Bell Gardens, California. He started racing Funny Car in 1978. He owns and driver for his team John Force Racing.

All of his 134 career victories have made him one of the best drag racers in the sport. His three daughters Ashley, Brittany, and Courtney are all drag racers, and his oldest daughter Adria is CFO of John Force Racing.

He has earned the nickname “Bruce Force” for his domination in winning ten straight NHRA championships. His family is known as “The First Family of Drag Racing”.

In 1990, he won 16 NHRA championships. He was named “Driver of the Year” regarding all American motor racing in 1996, becoming the first drag racer to win the award.

Force ranks on the 2nd spot on NHRA’s Top 50 Drivers behind Don Garlits. He was the recipient of the Lee Iacocca Award at Bristol Dragway in 2012. He and his family were featured in the A&E reality TV show ‘Driving Force’.

How Does John Force Spend His Money?

John Force spends some of his money on real estate.

Here are some of the best highlights of John Force’s career:

“We’ve enjoyed being involved in the SYNTEC Outperformers program these last four years… because it encourages the young individuals who’ll be the racing crew chiefs of the future. I want to personally salute Chris Burd as the national scholarship winner.” – John Force

“We need to go after these guys, … We need to quit racing scared. When you’re (in the points lead), you always back off a little bit and play it safe. But now I ain’t in the lead. I’ve got nothing to lose. So let’s play hardball because I’ve got too much experience to suck this bad.” – John Force

“It rejuvenated me and all of a sudden it wasn’t about winning the championship. To be honest, I didn’t think about (the championship) all day. I was just happy. You know, I’ve got a great team, and I love to drive my race car.” – John Force

“Nothing gets old. It’s always exciting, especially with the competition that we’ve put together this year. The guys that have made this Showdown, it was tough to make it. Robert Hight coming from behind made our program look real good, but I’m really looking forward to Indy, and I really want to thank Skoal for putting up the money to make this possible.” – John Force

“The tune-up was good, the track is good, and the air is good. That’s what it takes. If you want to win a bunch of championships you have to stay ahead of the curve. We started working on this stuff a year ago, and it bit us, but now the work is paying off, and all three cars are running well.” – John Force

Now that you know all about John Force’s net worth and how he achieved success; let’s take a look at some of the lessons we can learn from him:

You only struggle because you’re ready to grow but aren’t willing to let go.

You can only lose what you cling to.

Every new beginning comes from some other beginning’s end.

How much is John Force worth?

John Force’s net worth is estimated to be $20 Million.

How old is John Force?

How tall is John Force?

John Force is an American drag racer. Force has 15 NHRA Championship wins, and a total of 132 wins overall. He has dominated his field for over 30 years. Three of his four daughters and son-in-law currently race for his team, with his oldest daughter serving as CFO.

What do you think about John Force’s net worth? Leave a comment below.