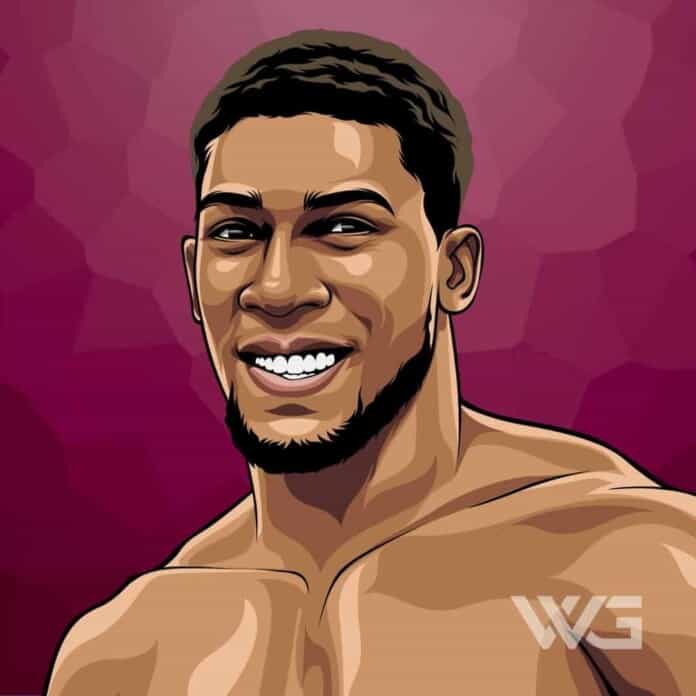 What is Anthony Joshua’s net worth?

Anthony Joshua is a British professional boxer from Watford, Hertfordshire.

Joshua is a former unified world heavyweight champion, having held the WBA (Super), IBF and WBO titles between 2016 and 2019. At the regional level, he held the British and Commonwealth heavyweight titles from 2014 to 2016.

As of December 2022, Anthony Joshua’s net worth is $80 Million, making him one of the richest boxers in the world.

Anthony Oluwafemi Olaseni Joshua was born on the 15th of October, 1989, in Watford, Hertfordshire. Joshua is the son to Robert and Yeta Joshua. He spent most of his childhood at his ancestral home in Nigeria. He was five years old when his parents split, and his mother decided to move back.

Joshua returned to Watford to attend Kings Langley Secondary School. He was nicknamed ‘Femi’ by his friends and teachers because of his middle name ‘Oluwafemi’.

Anthony Joshua won the Haringey Boxing Cup for two straight years in 2009 and 2010. His twenties were a roaring success as he won all 18 fights at the Amateur level.

In the European Amateur Boxing Championships in June 2011, he defeated Eric Berechlin and Cathal McMonagle. He was however interrupted by the Romanian Mihai Nistor.

He held an amateur record of 40-3 and was accorded the title of Amateur Boxer of the Year by the Boxing Writers Club of Great Britain in 2011. Though a novice internationally, his first appearance at the London Olympics was sealed with a gold medal in 2012.

Joshua’s match with Klitschko was the most important fight he faced. Klitschko was a boxing royalty who had lost only 3 of his professional matches.

A rematch was expected between Klitschko and him, but Klitschko announced on 3 August 2017 that he would be retiring from boxing, thus ending the speculation of another match. Anthony Joshua was next scheduled to fight Kubrat Pulev to defend his WBA title.

He would next fight Joseph Parker for his highest career pay of £18 million. The fight was scheduled on 8 January 2018 at the Principality Stadium in Cardiff.

He recently made the news for his fight with Andy Ruiz Jr., where Ruiz beat Joshua and took the belt from him. Ruiz was the underdog in the fight, and hardly anyone thought he’d stand a chance.

Here are some of the best highlights of Anthony Joshua’s career:

“There are two types of warriors: the one that rides through on his horse and tries to slay everyone, and the sniper. I try to be more like the sniper. Bang. Break them down, shot by shot.” – Anthony Joshua

“Cardio is a nice way to start the morning, man. Whether you sit on the bike for half an hour or throw on two jumpers and just sweat, it’s good to get up, get the body active, put on your headphones, and just pedal away.” – Anthony Joshua

“I was raised well. My parents are from Nigeria; their culture is respectful. Very respectful. But I learned that you have to be determined. It’s not violence or aggression. It’s sheer determination.” – Anthony Joshua

“Sportsmen just do what they do. I’m not trying to be a role model. If there’s any inspiration people can take from me, take as much as you can – from my good and my bad.” – Anthony Joshua

“You’re confident, you’re going to the ring to fight, but there’s always that little thing where you’re thinking, ‘God.’ You’re nervous. But you have to embrace it and enjoy it.” – Anthony Joshua

Now that you know all about Anthony Joshua’s net worth, and how he achieved success; let’s take a look at some of the leadership lessons we can learn from him:

Joshua said into the microphone immediately after the fight: ‘As boxing states, you leave ego at the door and you respect your opponent.

He then went on to give heartfelt praise and appreciation to the boxer and the person he fought against. This is just one example among many.

It’s not just the fact that Joshua has ethics and comes across as a humble (but confident) down to earth decent guy that strikes me. No. What really strikes me is the fact that he is already operating by an explicit set of principles that direct his behaviors.

Great leaders know their principles and stick with them. Joshua possesses such a compass.

The gestalt word is ‘making contact’ – the ability to connect with people, so when you’re speaking to them you’re connecting at a more profound, personal level. This is the essence of building great relationships.

How much is Anthony Joshua worth?

Anthony Joshua’s net worth is estimated to be $80 Million.

How old is Anthony Joshua?

How tall is Anthony Joshua?

Anthony Joshua is a British professional boxer and a unified world heavyweight champion. He has successfully represented Britain at the Olympics, Commonwealth Games, and several other international sporting events.

Joshua holds a reputation to fight in high-profile matches with expensive stakes and drawing record-breaking views and audiences.

As of December 2022, Anthony Joshua’s net worth is roughly $80 Million.

What do you think about Anthony Joshua’s net worth? Leave a comment below.