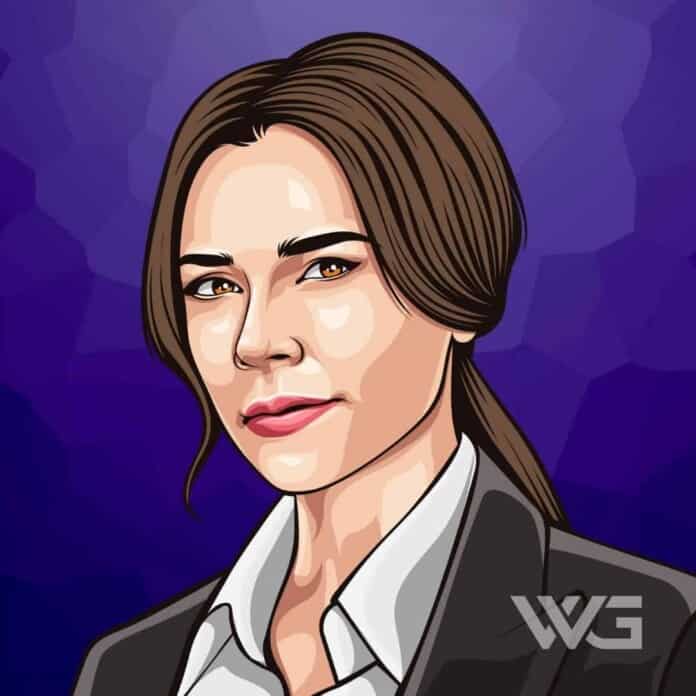 What is Victoria Beckham’s net worth?

Victoria Beckham is an English businesswoman, fashion designer, and former singer from Harlow, England. In the late 1990s, Beckham rose to fame with the all-female pop group Spice Girls.

She was signed to Virgin Records and Telstar Records and had four UK Top 10 singles. Her first release, “Out of Your Mind”, reached number 2 in the UK Singles Chart.

As of February 2023, Victoria Beckham’s net worth is roughly $450 Million.

Victoria Beckham was born on the 17th of April, 1974, in Harlow, England. Beckham is the daughter of Jacqueline Doreen and Anthony William Adams. Her father was an electronic engineer and her mother was an insurance clerk and hairdresser.

Victoria was brought up in Goffs Oak, Hertfordshire, where her parents had a wholesale business of electronic items. It provided a posh upbringing for her – a fact for which she was bullied at St. Mary’s High School.

In 1993, Victoria was selected for ‘Spice Girls’, along with Geri Halliwell, Emma Bunton, Melanie Brown and Melanie Chisholm. She was chosen to be a part of the band out of the 400 girls who auditioned.

After selling 20 million copies of ‘Spice’, ‘Spice Girls’ released their second album, ‘Spiceworld’, in 1997. The album did not do as well as the first one, even though they came up with a movie with the same title.

In 2000, Beckham released her solo number, ‘Out of Your Mind’ but she was outsold by Spiller’s number. The same happened when she released her second solo, ‘Not Such An Innocent Girl’ as Kylie Minogue’s number outperformed it.

In 2007, Beckham moved to the states with her family as her husband, David Beckham, signed a deal with MLS’s Los Angeles Galaxy. Beckham used this opportunity and starred in her own NBC Special, ‘Victoria Beckham: Coming to America’.Spice Girls’ reunited and did an 11-show world tour.

Beckham for the first time released her very own dress collection in 2008. Her growing interest in fashion and her personal feminine taste was the reason why she launched a ‘silhouette enhancing’ collection of dresses.

Here are some of the best highlights of Victoria Beckham’s career:

“When you’re in a position to be paparazzi-ed just walking down the street, you’d look a little daft if you were smiling all the time.” – Victoria Beckham

“When I started out in fashion, everything had to be very structured and tight and controlling, and now I’m getting to a point where I think – I could wear a great big parka, that could be quite fabulous. I haven’t always got to show off my size, show off my shape. It’s a turning point for me.” – Victoria Beckham

“I was very obsessed. I mean, I could tell you the fat content and the calorie content in absolutely anything.” – Victoria Beckham

“It is dog-friendly nail polish before we even go there because I know that is an issue. She’s a bulldog, she needs all the help she can get. We’ve tried to feminize her a little bit and make her feel sexy!” – Victoria Beckham

“I can’t concentrate in flats. I could go to the gym if I wore flats, I’d love to go to the gym, but I just can’t get my head around the footwear.” – Victoria Beckham

Now that you know all about Victoria Beckham’s net worth, and how she achieved success; let’s take a look at some of the best lessons we can learn from her:

Who can forget the infamous lyrics: “If you wanna be my lover, you gotta get with my friends”? (We bet you sang that in your head, didn’t you?) Despite the Spice Girls split in 2000, Victoria has remained close to her four other band members – even reuniting for special tours in 2007, 2012, and possibly again this year.

If her Spice Girls days taught us anything, it’s to stay true to yourself. She certainly did, maintaining her ‘Posh Spice’ persona alongside Scary Spice, Sporty Spice, Baby Spice, and Ginger Spice in all her years with the female pop group…and even after.

Her fashion sense reflects that as well, upholding a façade of elegance, minimalism, and sensibility in every occasion.

3. Keep Your Dreams as High as Your Heels…

Speaking of fashion sense, she was often seen in heels as high as her ambitions back then (and even now); that is, 4-inches or higher.

In fact, she published a fashion advice guide titled That Extra Half an Inch: Hair, Heels, and Everything in Between back in 2006 – no doubt including examples she lived by. Now, she is known as one of the most successful British fashion entrepreneurs with an eponymous designer label. Coincidence? We think not.

How much is Victoria Beckham worth?

Victoria Beckham’s net worth is estimated to be $450 Million.

How old is Victoria Beckham?

How tall is Victoria Beckham?

Although her musical career with the ‘Spice Girls’ gave a nudge to her successful image it is her own hard work as an entrepreneur and a fashion designer that has made her one of the 100 most powerful women in the UK.

As of February 2023, Victoria Beckham’s net worth is estimated to be roughly $450 Million.

What do you think about Victoria Beckham’s net worth? Leave a comment below.