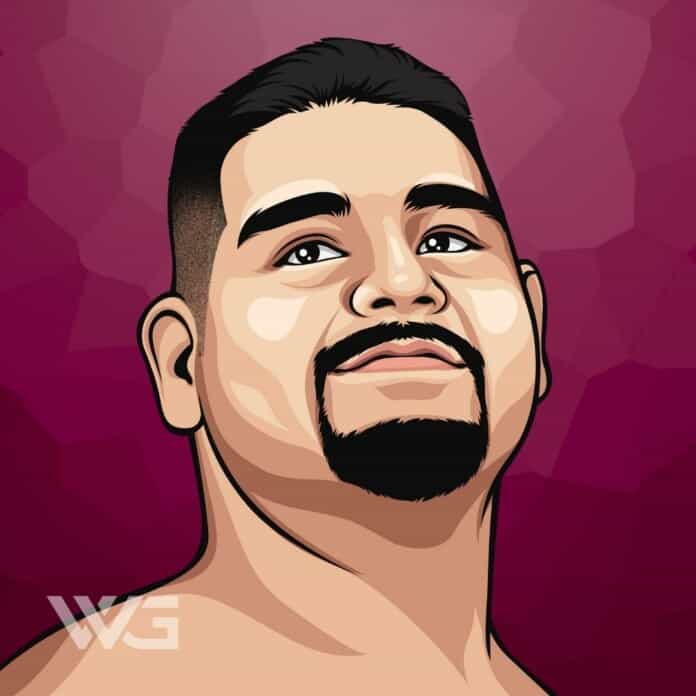 What is Andy Ruiz Jr.’s net worth?

In June 2019 he scored a major upset by defeating Anthony Joshua to win the WBA (Super), IBF, WBO, and IBO heavyweight titles. In doing so, Ruiz became the first boxer of Mexican heritage to become a world heavyweight champion.

Andy Ruiz Jr. was born on the 11th of September, 1989, in Imperial, California. His father is a former construction worker who started his own business flipping houses.

Ruiz had a passion for baseball before his father got him into boxing; he has noted that his first amateur fight was at age seven in San Diego.

Ruiz later worked for his father in construction for a time before deciding to become a full-time boxer and starting his amateur career in Mexico. His grandfather owned a boxing gym in Mexicali that was used by featherweight champion Jorge Páez.

In 2017 Angel “Memo” Heredia, a well-known strength and conditioning trainer confirmed that he would be working alongside Ruiz.

Ruiz was next to make a ring return on February 3, 2018, on the undercard of Gilberto Ramirez vs. Habib Ahmed WBO super middleweight championship title fight at the American Bank Center in Corpus Christi, Texas.

His next fight was scheduled to take place on July 7, 2018, at the Save Mart Center in Fresno, California against veteran journeyman Kevin Johnson.

In 2019, it was reported that Ruiz had signed a deal with powerful advisor Al Haymon, and would now be part of the Premier Boxing Champions stable, with his fights being aired on Showtime and FOX.

Prior to the Dimitrenko fight, Ruiz put his name forward to replace Jarrell Miller and challenge Anthony Joshua for the unified WBA (Super)/IBF/WBO/IBO heavyweight titles on June 1, 2019.

Here are some of the best highlights of Andy Ruiz Jr.’s career:

“We’ve been working really hard, man, really hard. I wanted to prove everybody wrong, all the doubters thinking I was going to lose in the third round, first round. I was looking at comments, as well. But what do you know, man? I’m the first Mexican heavyweight champion of the world. It’s a blessing. … I’m still pinching myself to see if this is real, man! Wow. It’s amazing.” – Andy Ruiz Jr.

“That was crazy that that happened, right? That was my first time on the canvas. When I was on the canvas I was, like, ‘Whoa, what the hell just happened?’ ” – Andy Ruiz Jr.

“When I was on the canvas I was, like, ‘Whoa, what the hell just happened?’ But I had to get him back. I think that’s the Mexican blood in me, the Mexican warrior that I have, I had to return the favor.” – Andy Ruiz Jr.

“I was waiting for him to open up. I wanted to break him down a little bit more, work the body. He hits really hard, man. He hits pretty hard. I just needed to be smart in there. I thought he opened up too much to where I could counter him. The speed, I think, got to him, and we got this victory.” – Andy Ruiz Jr.

Now that you know all about Andy Ruiz Jr.’s net worth, and how he achieved success; let’s take a look at some of the strongest lessons we can learn from him:

1. Exercise Should Be Included in Your Priorities

A sensible workout that fits your needs helps keep you healthy and strong. It also improves your sense of well-being and can help you live longer.

2. Having a Mask on Will Keep People Away

If you have a habit of posturing and pretending to be someone else, you’ll be driving people away. Express your true self is an effortless way of attracting people.

3. Letting Go of the Past Helps Release the Pain.

Let go of the things that hurt you. Forgiving others has been proven to be highly beneficial to your health.

How much is Andy Ruiz Jr. worth?

Andy Ruiz Jr.’s net worth is estimated to be $10 Million.

How old is Andy Ruiz Jr.?

How tall is Andy Ruiz Jr.?

Andy Ruiz Jr. is an American professional boxer who is a heavyweight who had a record of 105-5 as an amateur.

He is ranked the world’s best active heavyweight according to BoxRec.

What do you think about Andy Ruiz Jr.’s net worth? Leave a comment below.