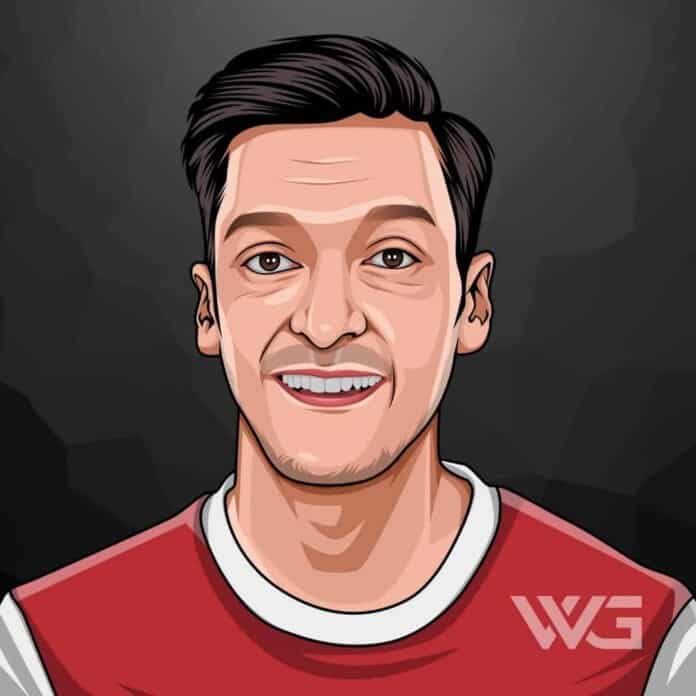 What is Mesut Ozil’s net worth?

Ozil began his senior career as a member of his hometown club Schalke 04 in the Bundesliga, departing two seasons later to join Werder Bremen for €5 million.

As of December 2022, Mesut Ozil’s net worth is estimated to be roughly $120 Million.

Mesut Ozil was born on the 15th of October, 1988, in Gelsenkirchen, Germany.

As a youngster, he initially played for some local clubs in Gelsenkirchen, and later on moved to Rot-Weiss-Essen, an Essen-based DFB football club that he represented for 5 years.

Ozil made it to the Schalke 04’s youth academy in the year 2005. He represented FC Schalke 04 wearing jersey number 17 and played as an attacking midfielder.

Werder Bremen, a German Football Association club based in the Northwest German state of Bremen, agreed to pay Mesut the steep fees demanded by him. He signed a contract with the club to play for 3 years.

In 2010, Mesut Ozil moved to Real Madrid from Werder Bremen for a massive transfer fee estimated to be about €15 million. He debuted for Real Madrid against Hercules which his team won convincingly.

In the 2014 FIFA World Cup, Mesut Ozil played a pivotal role in Germany’s World Cup victory. Germany eventually won the match 1-0. Mesut scored his initial goal in the 2015-16 Season against Manchester United which Arsenal went on to win by 3-0.

His 3rd season with Arsenal came to a close with 20 assists and 8 goals which earned him the award for being the ‘Arsenal Player of the Season’.

Here are some of the best highlights of Mesut Ozil’s career:

“I don’t listen to these people – I just listen to my coach and my people who say things straight to my face. So of course, if I play bad, I know that just as I know when I play well.” – Mesut Ozil

“I always have the motivation, particularly before the games – I want to win all the games and I hate to lose, even in training I am p****d and aggressive because I always want to win.” -Mesut Ozil

“Of course, we need time to understand everything completely but it is going well – he is a very good coach and as a player, you can speak to him and he listens which makes everything easier for us.” – Mesut Ozil

“I have said before the main thing is to achieve more than we have over the last few years and I think we have the potential to win something with the team. Hopefully, at the end of the season, we will win some trophies.” – Mesut Ozil

“We are fourth in the table so we know we can achieve more and I need to show on the pitch my potential to help the team but I think so far it is going well, especially with the goals.” – Mesut Ozil

Now that you know all about Mesut Ozil’s net worth, and how he achieved success; let’s take a look at some of the best lessons we can learn from him:

1. Don’t Be Afraid of Making Mistakes

Use “failure” as fuel to create an infinitely bigger success – a lesson we can all learn from.

It sounds cliche, but it’s important that we always make sure we have more dreams than memories.

To wake up each morning without a goal to strive for will make for a bleak, mundane life. We only get one shot at life, and it’s too short to be miserable.

As adults, we learn tact. We learn to be more careful with the feelings of others rather than just blurting things out, but it’s important that we remain honest will doing so.

As adults, we often become too careful, too afraid to offend a person or group, and therefore water down our thoughts or even create a lie in their place. A painful truth is better than a lie.

How much is Mesut Ozil worth?

Mesut Ozil’s net worth is estimated to be $120 Million.

How old is Mesut Ozil?

How tall is Mesut Ozil?

Mesut Ozil is a renowned German footballer who shot to fame when he was selected as one of the nominees for the ‘Golden Ball Award’ in FIFA World Cup 2010.

He plays as a midfielder is noted for his aggressive playing style, and numerous footballers and coaches have seen in him shades of Zinedine Zidane, the legendary French footballer.

As of December 2022, Mesut Ozil’s net worth is approximately $120 Million.

What do you think about Mesut Ozil’s net worth? Leave a comment below.