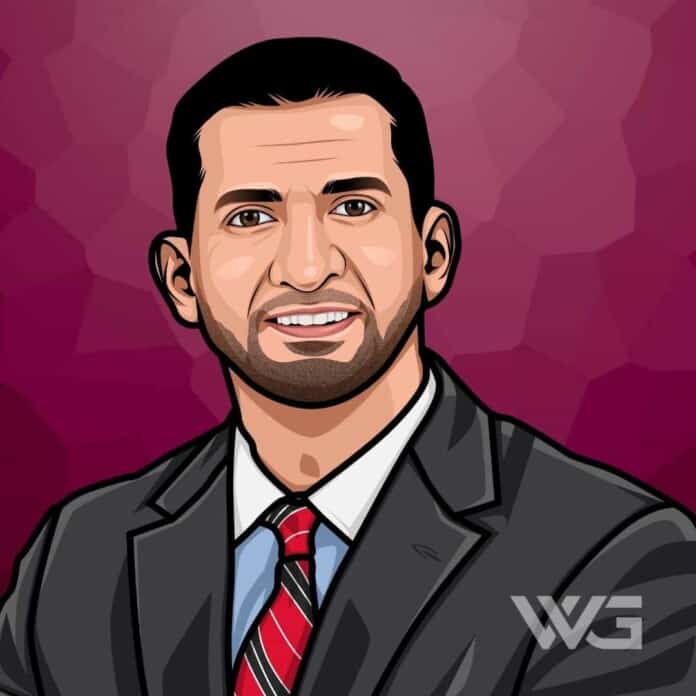 What is Patrick Bet-David’s net worth?

Patrick Bet-David is an Iranian-American entrepreneur.

Bet-David was born in Iran and migrated to the U.S in 1990. After high school, he enlisted in the US army. After he left the Army, he got work at Morgan Stanley. In 2009, he launched a website called ‘Saving America’. He later joined a radio show broadcast in Los Angeles.

Patrick Bet-David was born in 1978 in Iran. Bet-David and his parents were of Assyrian and Armenian descent. In the late 1980s, he fled Iran with his father during the war. They lived for two years in Germany before migrating to the US in 1990. He was 12 years old when he first came to the U.S.

The family was eventually granted US citizenship. After high school, he joined the US Army and served with the 101st Airborne Division.

In 2009, Bet-David founded PHP Agency, which is a financial services marketing organization that offers insurance products including annuities, health insurance, and 401k roll-overs. PHP agency is headquartered in Texas.

The company raised $10 million in Expansion Capital in 2017 from a syndicate of private equity players, including; Atalya Capital, Gabriel Brener, and Oscar De La Hoya.

In 2019, at a convention, PHP hosted 8,000 attendees and had Kobe Bryant and President George W. Bush as guest speakers. He also owns Valuetainment Media LLC. The company creates and syndicates the Valuetaiment channel on YouTube and other new media outlets.

He uses his social media platform to share his bog passion for business. He likes to educate and encourage tomorrow’s entrepreneurs.

How Does Patrick Bet-David Spend His Money?

Bet-David has an impressive collection of cars. In his collection, we can see cars such as a Lamborghini Veneno, a BMW i8, a Rolls Royce.

Here are some of the best highlights of Patrick Bet-David’s career:

“This came about you know how everybody talks about what is the key to success. The key to success is to marry the right person, save money, work hard, go to school, get a degree, love people, faith, god and so much more. You will hear so many things.” – Patrick-Bet David

“You know what, in my mind the biggest key to success almost anybody I see that takes it to the whole different level, the highest levels. The difference between and other people is their sequencing.” – Patrick-Bet David

“He says it took me 54 years to realize I’m not a good number one. Every one of his biggest checks he has ever got was the number five the number four or the number three.” -Patrick-Bet David

“If you can’t look at people as stocks and you saw somebody who that has big ups saying you look into them early. It’s going to be a wild ride.” – Patrick-Bet David

Now that you know all about Patrick-Bet David’s net worth and how he achieved success; let’s take a look at some of the lessons we can learn from him:

There are three areas that determent somebody to be an expert, theory, experience, and application.

You have to be patiently aggressive to succeed in life. If you are willing to give it time, whether it’s 10 years or one year, you will eventually succeed.

Bet-David is a true business guru. He has built a business empire from scratch, while routinely overcoming the criticism tossed his way. It’s easy to admire the way this guy gets up every day and continues building no matter what!

How much is Patrick Bet-David worth?

Patrick Bet-David’s net worth is estimated to be $200 Million.

How old is Patrick Bet-David?

How tall is Patrick Bet-David?

Patrick Bet-David is an American entrepreneur and financial adviser who was born in Tehran, Iran. Bet-David came to the United States in 1990.

He lived in Glendale, California, before he served in the 101st Airborne Division of the United States Army. After being discharged from the Army, he started his financial services career. Today, he is considered to be one of the most motivational entrepreneurs.

Bet-David reached the fundamentals of entrepreneurship and personal development.

He also inspires people to break from limiting beliefs or other constraints and achieve their dreams. His website and the channel have been referred to as “the best channel for entrepreneurs”.

What do you think about Patrick-Bet David’s net worth? Leave a comment below.