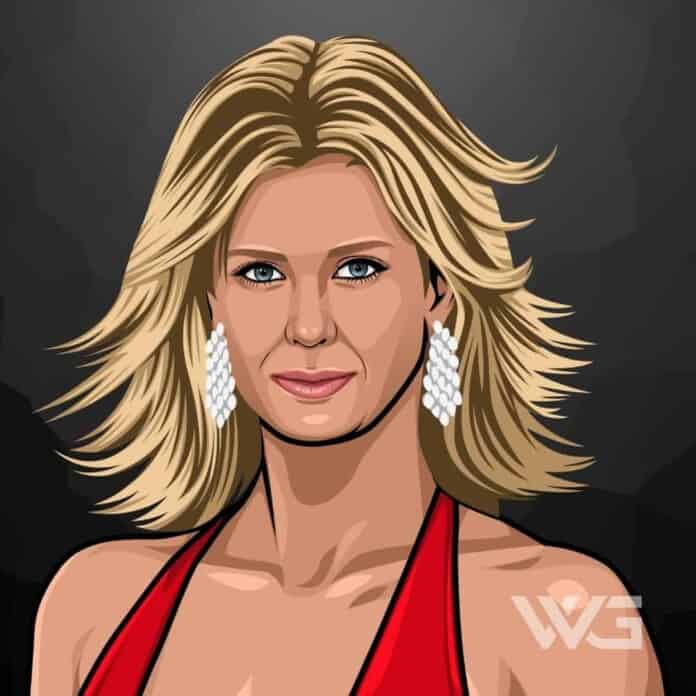 What is Rachel Hunter’s net worth?

Rachel Hunter is a New Zealand model and actress.

Rachel Hunter was born on the 8th of September, 1969, in Glenfield, New Zealand. Her parents divorced when she was just a child. She was diagnosed with a rare blood disease when she was younger. Her mother was the first one who suggested that she should try modeling.

Hunter started to take her modeling career seriously, and she eventually started attending modeling school. She then started to do modeling jobs in New Zealand before returning to school at the age of 17.

Hunter started her modeling career when she was 16 years old. She began modeling in France, Australia, and New Zealand, appearing in Australian Vogue, Harper’s Bazaar, Australian Cosmopolitan, and various campaigns throughout New Zealand and Australia.

In 1989, she rose to fame after posing as a Sports Illustrated model. She subsequently appeared on magazine covers such as Cosmopolitan and the 1994 “Dream Team” cover of Sports Illustrated’s annual swimsuit issue.

In 2004, Hunter posed nude for a cover-featured Playboy pictorial. She went on to sign to Ford Models in New York. She first appeared on television in 1985 in an advertisement for an ice cream brand.

Hunter guest starred in ‘The Drew Carey Show’ in 1997. She has also appeared in many independent films, including ‘A Walk in the Park’ and ‘Two Shades of Blue’. Hunter appeared on an episode of ‘Lingo’ in 2005.  She is a well-known ambassador to “The Born Free Foundation”.

From 2012 to 2013, she appeared as a judge on ‘New Zealand’s Got Talent’. She fronted her own television series titled ‘Rachel Hunter’s Tour of Beauty’ in 2015.

How Does Rachel Hunter Spend Her Money?

Rachel Hunter has helped different charities throughout her career.

Hunter has helped out the community a lot when it comes to her charity work. Some of the charities she has supported include Born Free Foundation, Hillsides, Save the Elephants, and Storylines Trust.

Here are some of the best highlights of Rachel Hunter’s career:

“My true love is for animals and the earth. In New Zealand, where I grew up, our property was in a forest, and I would spend hours there as it felt like home. I also was a dancer from the age of five to about 15. However, I got toxoplasmosis, which is a blood disease that generally affects pregnant women.” – Rachel Hunter

“I believe we’re all born this way—spiritual, as this is the word we use. It’s just a matter of how we connect with it. I think that’s the beauty of being human—this innate ability we have to connect to a higher source. I had my first spiritual connection as a youth in the bush of New Zealand, and I remember being quite young and thinking, “Wow this is something else.” – Rachel Hunter

“No, my mother passed away about 18 months ago, and I wanted to process the grief, so I decided to go to India. You never get over the pain, but I’ve been training in yoga for about 16 years, and I wanted to go and help move that internal energy through. I went to yoga training in Rishikesh.” – Rachel Hunter

“It’s funny; with meditation, thoughts arise that can seem unsettling and frustrating. However, the more you sit and let them rise and fall away, you realize the ebbing and flowing thoughts. For example, an anxious thought can arise, but it lessens and falls away by taking deep breaths. Then, when another arises, it falls away. Eventually, the mind becomes still.” – Rachel Hunter

“Sometimes, we think we know what we are talking about, yet when we actually meet the people that have experience, we finally understand from their perspective then our hearts open, we listen, and we learn.” – Rachel Hunter

Now that you know all about Rachel Hunter’s net worth and how she achieved success; let’s take a look at some of the lessons we can learn from her:

The fidelity question is difficult. Society has made us believe we’re supposed to be monogamous when we’re not killer whales, or whatever the monogamous species is.

Whatever you’re experiencing or going through meditation can help your situation. Give it some time.

3. Focus on Your Diet

To feel happy, it’s important to stick to a well-balanced diet.

How much is Rachel Hunter worth?

Rachel Hunter’s net worth is estimated to be $60 Million.

How old is Rachel Hunter?

How tall is Rachel Hunter?

Rachel Hunter is a New Zealand model, actress, and reality television show host. Over the years, she has become a household name in the fashion industry.

She is famous for hosting ‘Rachel Hunter’s Tour of Beauty’ on Imagination Television. Hunter has been successful in the acting world as well, and she has appeared in several television and film projects. Hunter is best known for her involvement in reality TV.

What do you think about Rachel Hunter’s net worth? Leave a comment below.

What is Michael Shanks' net worth? Introduction  As of ,...