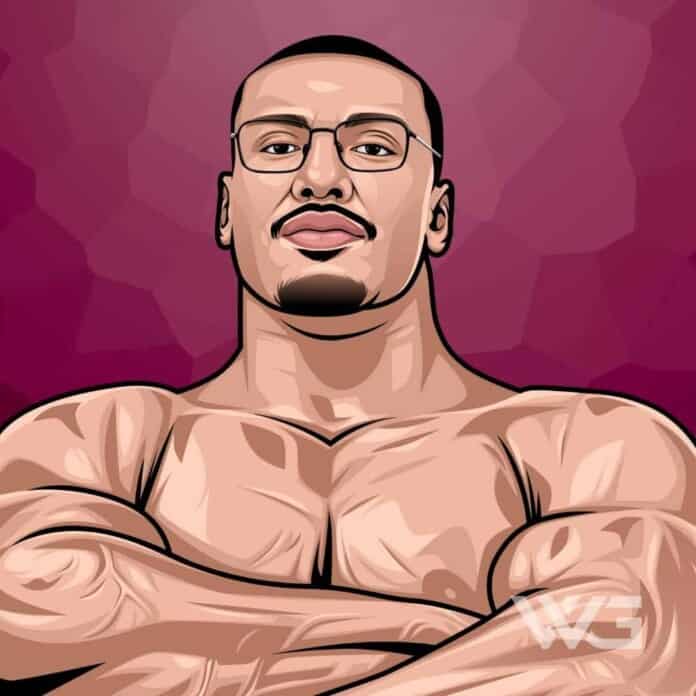 What is Larry Wheels’ net worth?

Larry Wheels went from living in extreme poverty as a child to becoming one of the strongest powerlifters in the world.

Growing up in poor neighborhoods of Bronx, New York, Larry’s childhood goal was to become stronger and bigger, so nobody would bully him.

Larry Wheels was born on the 3rd of December, 1994,  in Bronx, New York. While today, he lives a life full of success and recognition, his childhood was completely different.

On top of everything, Larry often had to face dangerous situations as a child, walking through the dark alleys and neighborhoods on his way to school. His initial motivation for strength training was that of safety.

To achieve his goal, Larry began doing push-ups, pull-ups, and sit-ups every day. With the help of his mother, he later built himself a basic weight set consisting of two 40-lbs concrete blocks and a broomstick.

After years of lifting weights, Larry took everything a step further to become a professional powerlifter. By 2017, he set two world records in the sport, becoming an inspiration for people along the way.

As he had no money, Larry worked with what he had to become stronger. He would do hundreds of sit-ups, push-ups, and pull-ups every single day. He even did arm wrestling competitions with his mother at times, driving home his determination to become bigger and stronger.

Noticing the motivation within him, Larry’s mother helped him build his own weight set. It consisted of two blocks of concrete and an old broomstick.

Here are some of the best highlights of Larry Wheels’ career:

“If you take too much testosterone the effects can vary ranging from something a simple as a headache to something as serious as an irregular heartbeat or increasing the thickness of your blood increases your risk of stroke.” – Larry Wheels

“Self-medication with prescription drugs is a slippery slope as you increase your chances of serious medical problems plus the behavior often becomes secretive, compulsive and reckless.” – Larry Wheels

“Test and Anadrol, that is my bread and butter as of September last year. With Anadrol, I have no notable side effects other than high blood pressure, which I can feel when I go to tie my shoes in the morning and my head blows up like a tomato.” – Larry Wheels

Now that you know all about Larry Wheels’ net worth, and how he achieved success; let’s take a look at some of the lessons we can learn from him:

1. Fight For Your Dreams

If you truly want something in life, you’ll find a way to get it.

2. Your Body Is a Temple

Treat your body with respect and care for the efficient and wondrous way it takes care of you. Even if there are parts of your body, you don’t like, focus on your body with a sense of love and gratitude.

Physical touch is healing and intimate. It bonds us to other people and relieves stress and anxiety.

How much is Larry Wheels worth?

Larry Wheels’ net worth is estimated to be $1.5 Million.

How old is Larry Wheels?

How tall is Larry Wheels?

Larry Wheels is the current WRPF all-time total world record holder in the 242-pound raw division. Wheels is a true inspiration, and he has shown us that everything is possible.

What do you think about Larry Wheels’ net worth? Leave a comment below.