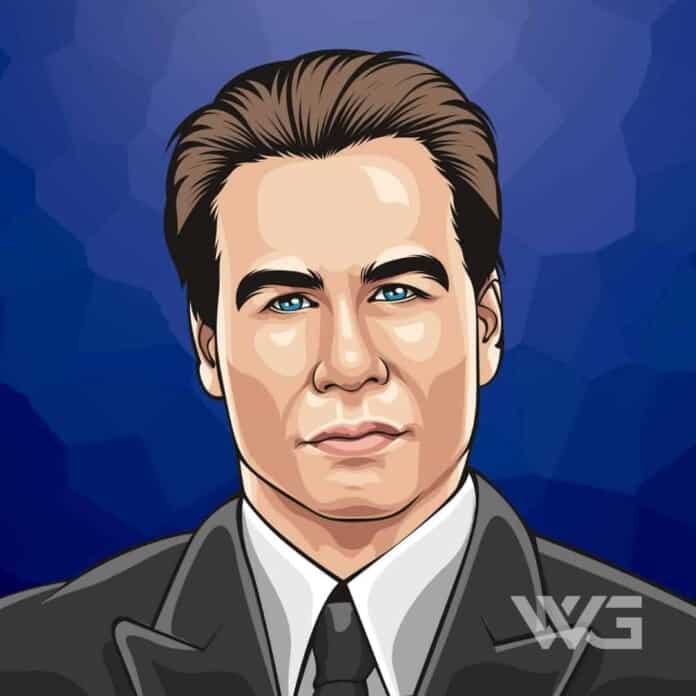 What is John Travolta’s net worth?

As of November 2022, John Travolta’s net worth is estimated to be roughly $250 Million.

John Joseph Travolta is an American actor, film producer, dancer and singer from New Jersey. Travolta first became known in the 1970s, appearing on the television series ‘Welcome Back, Kotter’ and starring in the box office successes ‘Saturday Night Fever’ and ‘Grease’.

John Joseph Travolta was born on 18th of February, 1954, in Englewood, New Jersey. His father, Salvatore was a semi-professional American football player who owned a tire repair shop while his mother, Helen Cecilia was an actress and singer.

Travolta was the youngest of six children and he attended Dwight Morrow High School but later dropped out as a junior when he was 17 years old.

Travolta began his acting career when he moved to New York and got a role in a touring company of the musical Grease and the Broadway hit, Over Here.

His role as the swaggering Vinnie Barbarino in the TV sitcom, ‘Welcome Back, Kotter’, aired on ABC from 1975 to 1979. It gave him the first taste of fame.

‘Face/Off’, a 1997 action thriller film directed by John Woo was a critical and financial success. It starred Nicolas Cage and John Travolta playing an FBI agent and a terrorist respectively.

He starred in ‘The General’s Daughter’ a 1999 murder mystery film based on a novel of the same name by Nelson DeMille and directed by Simon West.

Here are some of the best highlights of John Travolta’s career:

“Princess Diana was a nice dancer because she had confidence. In fact, when we danced together she started to lead, and I looked her in eye and went, ‘No, you have to let me lead.’ So I grabbed her around the waist and we were off to the races.” – John Travolta

“I’d been on a road trip right out of college, with a buddy of mine. It was uneventful. We didn’t get laid. Although one time it was about 800 degrees and we were in Texas. We had shorts on and nothing else and somehow a motorcycle cop pulls up beside me and says, ‘Come on, get on it, get on, go, go, go!’ So I speeded up and it turns out we’re in a huge state funeral. There are about 40 black Cadillacs in a row and then a green van called Mr. Greenjeans, with two guys with no clothes in it.” – John Travolta

“Sports, entertainment, and aviation are three of the most exciting professions in the world; you are dealing with the same magnitude.” – John Travolta

“I’m a jet jockey and I’ve always escaped ever since I was a kid. I’ve always been a weekend type runaway person. Work hard, play hard type thing. It’s not been a mid-life thing at all, it’s been a habit because I think it changes your environment and how you feel even if it’s for the day. It’s a good thing.” – John Travolta

“I’ve done so many interviews that I’ve gotten past the ego and the personality. I used to feel that there might be something missing, but a few years ago I realized that I was so causative over how the interview went that I was no longer concerned over the effects of the interview.” – John Travolta

3 Lessons from John Travolta & From the Film ‘Grease’

Let’s take a look at some of the lessons we can learn from him and the film ‘Grease’:

1.  Toxic Masculinity is Not Where it’s At

The T-Birds are the epitome of toxic masculinity. This high school musical is riddled with toxic masculinity. Danny has to pretend he’s never met Sandy before when she tries to say hello to him in front of his fellow T-Birds so that he doesn’t look like a right wimp who might actually have feelings.

Most of the boys treat women like conquests and there are some seriously dangerous rape-culture lyrics like: “Tell me more, tell me more / Did she put up a fight?”

2. Slut Shaming is Not Cool

Rizzo doesn’t let her pregnancy scare ruin her life. When Rizzo believes she has accidentally fallen pregnant, she walks back into school a social pariah: the cruel kids in school laugh, whisper and turn their backs on her.

But instead of allowing the slut shaming to penetrate her thick skin, Rizzo sings about how enjoying a healthy sex life is nothing to be ashamed about and how societal double-standards are pitted against women and how she has no plans to be a passive 1950s housewife:

The outfits in the film are iconic, especially the Pink Ladies jackets. Has anyone else spent most of their life since seeing Grease yearning for a Pink Ladies’ jacket?

Grease really demonstrates the power of uniformity in creating a shared identification, which is the same as any fashion subculture, really. Mess with one and you mess with them all.

How much is John Travolta worth?

John Travolta’s net worth is estimated to be $250 Million.

How old is John Travolta?

How tall is John Travolta?

John Travolta made his debut in the Broadway cast of Grease, as well as the hit musical Over Here! He shot to stardom with his role as Vinnie Barbarino in the hit TV series, ‘Welcome Back Kotter’.

He earned his second Academy Award nomination and went on to win a Golden Globe for his performance in the critically acclaimed film, ‘Get Shorty’.

What do you think about John Travolta’s net worth? Leave a comment below.