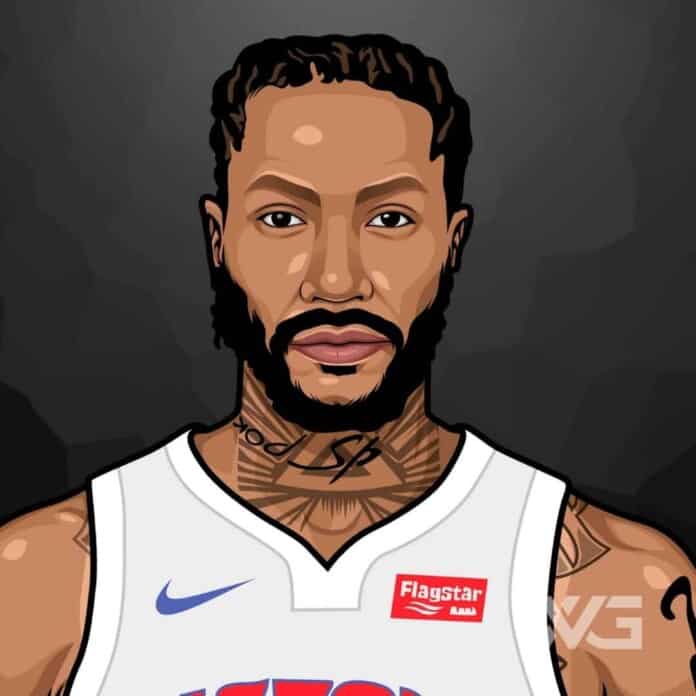 What is Derrick Rose’s net worth?

Derrick Rose is an American professional basketball player for the New York Knicks of the NBA.

Rose played one year of college basketball before the Chicago Bulls drafted him in the 2008 NBA Draft.

Rose was named the NBA Rookie of the Year and also became the youngest player to win the NBA Most Valuable Player in 2011.

Derrick Martell Rose was born on the 4th of October, 1988, in Illinois. Rose is the youngest son of Brenda Rose after Dwayne, Reggie, and Allan.

They were talented basketball players who thought Rose about basketball.

Rose’s interest in basketball grew, and he began to attract much more outside attention in Chicago’s basketball circles.

This led his mother and brothers to restrict outside contact with him.

Entering his senior year, he was ranked the fifth-best prospect in the nation by Sports Illustrated.

He accepted a scholarship to play for the University of Memphis Tigers under John Calipari.

While playing for Memphis, Rose earned high praise for his defense.

In 2008, Rose was selected with the first overall by the Chicago Bulls. He became the first Bulls draftee to score 10 points or more in his first 10 games since Michael Jordan had achieved it.

In 2011, Rose was named the NBA’s Most Valuable Player, once again joining the ranks of Michael Jordan as the only player to receive the award in Chicago Bulls history.

When he was 22 years old, he made history as the youngest player to ever receive the award.

He was later traded to the New York Knicks. In 2017, Rose was ruled out for the rest of the season after getting a knee injury.

In 2019, he signed with the Detroit Pistons and became the first player in Pistons history to record seven 20+ point games in a row.

How Does Derrick Rose Spend His Money?

Derrick Rose spends his money on real estate and cars.

Rose owns a condo in Chicago worth $1.5 million.

Derrick Rose has an impressive collection of cars. One of his most notable cars is a Rolls Royce Ghost and a Dodge Challenger.

Here are some of the best highlights of Derrick Rose’s career:

“I always want my shoes real clean. The front of my shoe is really like my personality, where off the court, I’m calm and kind of shy a little bit – low key. In the back, it’s kind of crazy, just like me on the court. I love how both of my personalities are involved into the shoe.” – Derrick Rose

“I won’t ever put myself in a bad position so that people can say bad things about me. I make smart decisions, and my friends and my family, they are all there for the right reason.” – Derrick Rose

Now that you know all about Derrick Rose’s net worth and how he achieved success; let’s take a look at some of the lessons we can learn from him:

All physical activity begins with the body’s core. Rose maintains the strength of his core so that he can jump, run, start, stop, and accelerate at the highest levels.

2. Nothing Is For Granted

Don’t take anything for granted. The better Rose play, the more attention he gets. And he can’t get away from it. You play great, you get attention.

3. Work On Your Mindset

Our mindsets are our most important tool to success in life.

How much is Derrick Rose worth?

Derrick Rose’s net worth is estimated to be $90 Million.

How old is Derrick Rose?

How tall is Derrick Rose?

Derrick Rose is an American professional basketball player who is a point guard.

Rose earned $21 million playing for the Knicks. In a typical year, he earned around $12-15 million from endorsements, most notably an Adidas deal.

He was voted “Rookie of the Year” in 2009. He was the youngest player to that point ever to earn that honor.

What do you think about Derrick Rose’s net worth? Leave a comment below.