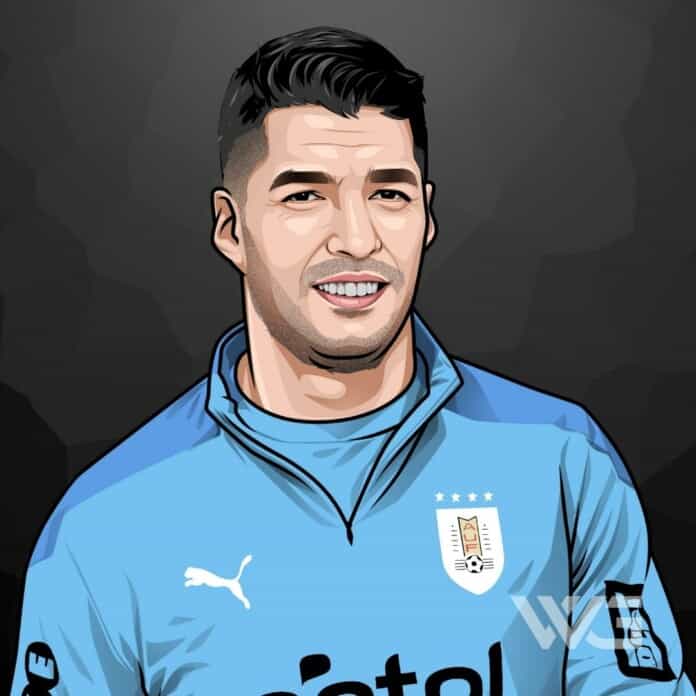 What is Luis Suarez’s net worth?

Luis Suarez is an Uruguayan soccer player, and one of the highest-paid soccer players in the world. Suarez has won many awards for his outstanding talent throughout his career.

He is also recognized for having a very aggressive nature when he is out on the field. Suarez is currently on the Uruguay National team as well as the ‘FC Barcelona’ team.

Luis Alberto Suarez Diaz was born in Salto, Uruguay on January 24, 1987. He has a total of seven siblings, and his older brother Paolo Suarez is also a professional soccer player; having played for the National Football League of Guatemala.

When he was only seven years old, his family moved to Montevideo, Uruguay, and lived in poverty. At a young age, his mother introduced him to Urreta, a soccer club in Montevideo. Once Suarez began playing for the club, he started to rise.

At nine years old, he was discovered by Wilson Perez while playing for Urreta. Perez, who was scouting for national youth team was astounded by his talent.

By the time Luis was 12 his father had abandoned the family, and he was struggling to advance academically so, he saw his opportunity to help himself and his family by playing the sport, and he took it.

As a young teenager, Luis began to fall into the wrong crowd and started drinking at about 15. Soon after this he met Sofia Balbi, the woman who is now his wife, and turned his life back around.

His first international debut was for the Uruguayan team that reached the 2007 U-20 World Cup.

After the U-20 World Cup, he gained recognition by the teams ‘Groningen’ and ‘Ajax’ and chose to join ‘Groningen’ for a while but soon got signed on to ‘Ajax’ with a five-year contract and 7.5 million euros. In the first season, he was named the ‘Dutch Footballer of the Year.’

Not long after, he was picked up by ‘Liverpool FC’ for 22.8 million euros. He then went on to win the ‘Golden Boot’ award and helped his team reach a victory in the Champions League. Suarez was also named ‘PFA Players’ Player of the Year’ and ‘FWA Footballer of the Year.’

He then left ‘Liverpool FC’ and was brought onto the ‘Barcelona FC’ team and now works alongside the team’s other two main strikers Lionel Messi and Neymar.

Luis Suarez has since helped his team win a fifteenth Copa Americana and was given the title of ‘Player of the Tournament’ in 2011.

Here are some of the best highlights of Luis Suarez’s career:

“I think all the bad things I have been through are in the past. I believe I am on the right path now, dealing with the people who can help me, the right kind of people.” – Luis Suarez

“My wife says that if people reach conclusions as to what I am like based on what they see from me on the pitch they would say I am a guy who is always annoyed, always in a bad mood, they’d say what must it be like to live with me. There are two of me, two different people.” – Luis Suarez

“I still sleep soundly every night. I’m not worried about everything people say.” – Luis Suarez

3 Rules for Success from Luis Suarez

Now that you know all about Luis Suarez’s net worth, and how he achieved success; let’s take a look at some of the success lessons we can learn from him:

Sometimes people don’t show who they truly are upfront and you should never judge them by a brief and vague interaction that you have with them. Give people and things a chance to show you what they’re really about.

2. Don’t worry about what other people think.

As long as you are satisfied with who you are and what you are doing you have no reason to be worrying about what people think. The only opinion that matters is your own and no matter who you are you don’t need approval from anyone else.

3. Never let go of the people that have always stuck by your side.

We all have those friends that have stuck by us no matter what your bank account says or what your social status is. Those are the people you should never let go of. They are the types of people you should surround yourself with to motivate and inspire you when you need it the most.

How much is Luis Suarez worth?

Luis Suarez’s net worth is estimated to be $70 Million.

How old is Luis Suarez?

How tall is Luis Suarez?

Luis Suarez is one of the most well-known and well-paid soccer players in the industry. He has brought many victories to his team.

As of November 2022, Luis Suarez’s net worth is approximately $70 Million.

What do you think about Luis Suarez’s net worth? Leave a comment below.