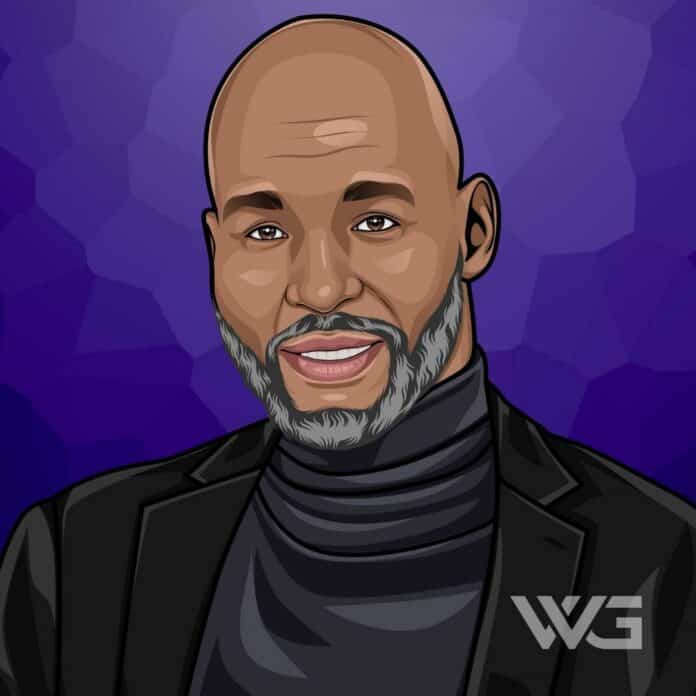 What is Bernard Hopkins’ net worth?

With a combination of speed and accuracy, Bernard Hopkins dominated the middleweight class in the early 2000s, earning the nickname, “The Executioner.”

Hopkins won the WBC light heavyweight championship by beating Jean Pascal in their title fight held in Quebec, Canada in May 2011.

By doing this, he beat George Foreman’s record and rose to the position of the oldest boxing world champion in history.

As of January 2023, Bernard Hopkins’ net worth is estimated to be $40 Million.

Bernard was raised in Philadelphia’s most criminalized neighborhood, the Raymond Rosen housing project.

Hopkins began engaging in minor thievery at the age of 11, and later joined a gang, progressing to more serious offenses, which landed him in jail.

Bernard was given an 18-year term and was found guilty of nine felonies when he entered Graterford Prison in 1982.

Hopkins’ elder brother was killed while he was incarcerated and then discovered that the man who murdered his brother would also spend his term in Graterford Prison.

The individual ultimately decided that the risk of joining the regular populace was too great and instead opted for confinement.

Hopkins later expressed his gratitude, adding that he would have killed the man who killed his brother and ensured that he would never have been released from prison.

Hopkins was to later say that he was aware that changing his own circumstances would be his responsibility and when a boxing program in the prison started when Hopkins was 21 years old, he realized he was passionate about the sport.

After completing five years in prison, Bernard was freed in 1988 with Hopkins becoming a Muslim, abstained from narcotics, alcohol, and junk food, and never went back to jail.

On October 11, 1988, in Atlantic City, New Jersey, Hopkins made his professional boxing debut as a light heavyweight but was defeated by Clinton Mitchell.

He took a year and a half off after his loss to prepare himself and then came back stronger and more determined in 1990 to take down Greig Page.

Bernard then added 20 notable victories in the middleweight division, becoming the oldest boxer to ever win a world championship in 2006, at the age of 49.

Hopkins went on to become the first boxer to simultaneously hold world titles from all four world boxing federations, which furthered his legacy amongst boxing’s most famous.

Hopkins has earned over $60 million in career earnings and is a former world champion in two weight classes.

Hopkins has been named the Fighter of the Year by both The Ring magazine and the Boxing Writers Association of America.

He was also inducted into the International Boxing Hall of Fame and continues to be involved in the boxing world as a promoter and advisor.

Bernard Hopkins’ net worth is estimated to be around $40 million with most of his wealth earned from his successful career as a professional boxer.

Hopkins also earns a significant amount of money from his various business ventures and investments.

Here’s a breakdown of Bernard Hopkins’ annual net worth:

His net worth and annual income are likely to continue to grow as he continues to be involved in arranging encounters in the boxing world.

Hopkins married the love of his life, Jeanette, and the couple had two children, with his caring and loving family being the most important thing in the world to him.

He has kept them away from the limelight, preferring that they remain hidden from the media spotlight throughout his boxing career.

Bernard has been involved in various philanthropic endeavors, including founding the Bernard Hopkins Foundation, which provides support to disadvantaged youth in Philadelphia.

Hopkins is also an advocate for criminal justice reform and has worked to help ex-offenders reintegrate into society.

Aside from his philanthropic work, Hopkins is also involved in various business ventures and is the co-founder of Golden Boy Promotions.

Fighters like Daniel Jacobs and Floyd Mayweather have benefitted from their association with Bernard and his promotional team.

Together with his partners, Hopkins manages a boxing promotion company, and he is also an advisor to various companies and organizations.

Hopkins continues to be intimately involved in the world of boxing and remains a highly respected figure in the sport.

Throughout his career, Hopkins won numerous awards and received accolades for his many record-breaking achievements.

He is a former world champion in two weight classes and is considered by boxing critics as one of the greatest boxers of all time.

Here are some of the more memorable moments from Bernard Hopkins’ career:

Aside from his awards and achievements in the boxing world, Hopkins has also been recognized for his philanthropic work and advocacy for criminal justice reform.

How Does Bernard Hopkins Spend His Money?

Not much is known about what Hopkins spends his money on, but he joins Sugar Ray Leonard and Lennox Lewis as one of the richest boxers in the world – which is no mean feat.

Hopkins has been involved with various charitable organizations and has donated to causes such as disadvantaged youth and the criminal justice reform movement.

He loves fast cars and has owned some of the most expensive cars in the world, not something he expected while serving his sentence in the penitentiary for robbery.

The Ring magazine rated him extremely highly, naming him Fighter of the Year and he was recently inducted, along with greats like Mike Tyson, into the International Boxing Hall of Fame.

Here are some of the best highlights of Bernard Hopkins’ career:

His support for the youth of Philadelphia got a boost when he founded the Bernard Hopkins Foundation.

He has worked to help ex-offenders reintegrate into society and makes regular trips to the jails and youth centers to speak to young men about making something of their lives.

Hopkins defeated Tavoris Cloud by a unanimous decision to win the IBF light heavyweight championship at the age of 48, surpassing his previous record.

Here are our favorite quotes from Bernard Hopkins:

Bernard Hopkins started off life in an incredibly underprivileged area where his chance of making a go of his life was extremely limited.

Hopkins set himself the goal of becoming a successful professional boxer from a young age and worked hard to develop his skills and compete at the highest level.

Once he reached the top of his profession, he set about becoming the best box in the history of the sport and some would say he achieved that.

It wasn’t all plain sailing on his way to the top, and Hopkins faced many challenges before he was able to achieve his dream of becoming a champion.

Despite the setbacks and problems, he experienced throughout his career, Bernard persevered and worked hard to overcome them.

Continually striving to learn and improve, Hopkins always sought out opportunities and ways to improve his skills and learn from his experiences.

This led to him becoming a champion and allowed him to stay at the top of his sport for many years.

Bernard Hopkins’ career spanned the years 1988 through to 2016 – an impressive feat for the highly competitive sport of international boxing.

After three decades of showing tremendous tenacity and perseverance to be the best, Hopkins is considered to be amongst the boxing world’s greatest talents.

As of January 2023, Bernard Hopkins’ net worth is estimated to be $40 Million.

What do you think about Bernard Hopkins’s net worth? Leave a comment below.

What is Drew Brees' net worth? Introduction  As of ,...