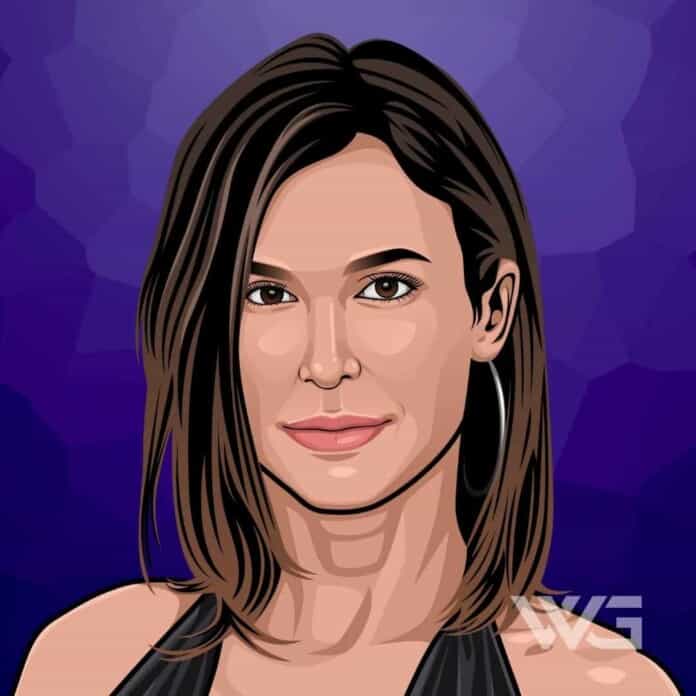 What is Elisabetta Canalis’ net worth?

Elisabetta Canalis is an Italian actress and model.

Canalis has appeared in several ad campaigns for L’Oreal and a spread in Maxim, among other modeling gigs. She has also worked on television in Italy and the US, co-hosting the Italian ‘Total Request Live.

Elisabetta Canalis was born on the 12th of September, 1978, in Sardinia, Italy.

Her father, Cesare, is a radiologist in the University of Sassari’s clinic, while her mother, Bruna, was a teacher.

Canalis was educated in Sassari. She attended the classical high school and then moved to Milan to study foreign languages at Università Degli Studi di Milano, though she never graduated because she started to work as a dancer for Silvio Berlusconi‘s TV channel Canale 5 at the age of 21.

Canalis was a dancer on the show ‘Striscia la Notizia’ from 1999 to 2002. Canalis had minor roles in the films ‘Deuce Bigalow: European Gigolo’ and ‘Virgin Territory’, a comedy produced by Roberto Cavalli.

In 2007, Canalis co-hosted the annual Italian music festival, Festivalbar, but the TV program closed. In 2 009, she replaced a pregnant Elena Santarelli on the Italian version of ‘Total Request Live’ on MTV Italia.

She played a recurring character in season 3 of the TNT series ‘Leverage’. In February 2011, she co-hosted the most important Italian song contest, Sanremo Music Festival with Gianni Morandi and Belen Rodriguez.

In 2003, she was featured in the Max nude calendar. She has been a spokeswoman and runway model from 2006 to 2009 for the fashion brand “Hollywood Milano”.

Canalis was the CoverGirl for the edition of Sport week Dreams in 2012. She appeared in a July 2012 advertisement for PETA. For Milano Fashion Week that year, she modeled on the runway for Philipp Plein and the new collection of Miss Bikini.

How Does Elisabetta Canalis Spend Her Money?

Elisabetta Canalis spends some of her money on charity work.

Here are some of the best highlights of Elisabetta Canalis’ career:

“Whenever I see my picture in a magazine, I know what is being written. They all say that I spend my time organizing parties and that my boyfriend does not want to marry me and be with me anymore.” – Elisabetta Canalis

“Sometimes when I flick through a magazine and see these thin models I’m left wondering what effect they can have on an insecure person. But I say to girls: forget what you see in the magazines, that is a world which has nothing to do with reality, think of it as a cartoon.” – Elisabetta Canalis

“I don’t always have the stomach muscles I have, and I get cellulite as well like everyone else. I stay fit, and I exercise, I go horse riding, and I have discovered Asian food with rice and soya which keeps you in shape.” – Elisabetta Canalis

“American men are more open, they are readier to express their emotions, but they also get frightened easily. Italians are used to drama. For us, arguing, shouting is perfectly normal – for them it is inconceivable.” – Elisabetta Canalis

“In the past I would self destruct when it came to love – I was immature, throwing myself into things but now times have changed, I want a relationship where you understand the other person.” – Elisabetta Canalis

Now that you know all about Elisabetta Canalis’ net worth and how she achieved success; let’s take a look at some of the lessons we can learn from her:

At the end of the day, we have always seen the end of our relationships as a personal failure. There is nothing ever pretty in saying goodbye.

2. Be Your Own Security

Be your own safety, no one is going to save you.

3. Be With Your True Love

Be with someone who really loves you for being you.

How much is Elisabetta Canalis worth?

Elisabetta Canalis’ net worth is estimated to be $13 Million.

How old is Elisabetta Canalis?

Elisabetta Canalis was born on September 12, 1978, and is currently 44 years old.

How tall is Elisabetta Canalis?

Elisabetta Canalis has worked on television in both Italy and the US.

What do you think about Elisabetta Canalis’ net worth? Leave a comment below.