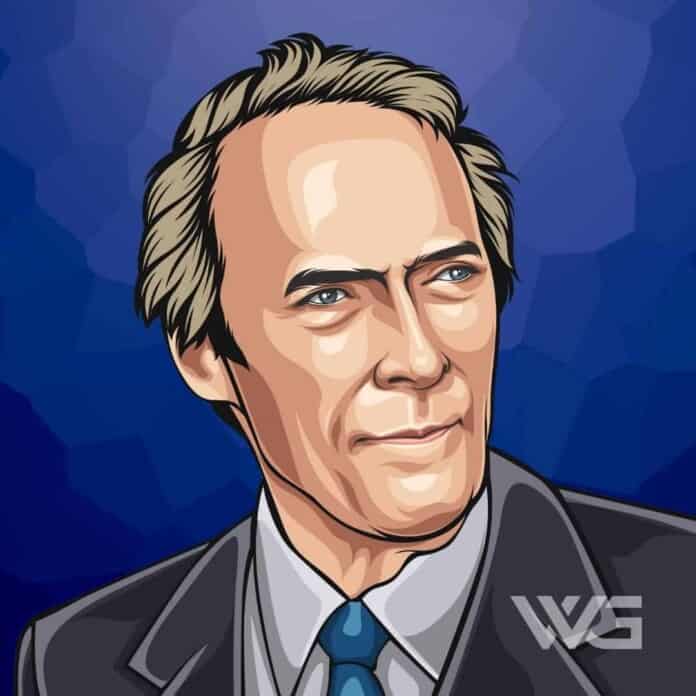 What is Clint Eastwood’s net worth?

As of February 2023, Clinton Eastwood’s net worth is estimated to be roughly $375 Million.

Clinton Eastwood Jr. is an American actor, musician, filmmaker, and political figure. He rose to international fame with his role as the Man with No Name in Italian filmmaker Sergio Leone’s Dollars Trilogy of spaghetti Westerns.

Eastwood is one of the most well-known actors in history.

Clinton ‘Clint’ Eastwood was born in San Francisco on the 31st of May, 1930. Eastwood is the son to Clinton Eastwood, Sr. and Margaret Ruth. While his father was a migrant worker, his mother was employed at a factory.

Eastwood attended Oakland Technical High School, and during this time he took up various odd jobs such as a lifeguard, paper carrier, forest firefighter and golf caddy. When he turned 20 years old, he was called for military duty at the Army Special Services.

Clint Eastwood appeared for a screen test at the Universal Studios and bagged his first role in the science fiction films, ‘Revenge of the Creature’ and ‘Tarantula’, released in 1955.

He later starred in the CBS series, ‘Rawhide’. The series lasted for eight seasons.

The movie, ‘Million Dollar Baby’ was released in 2004 and became one of his finest films of all time. The film earned him rave reviews and was a major box office success. It also won several awards, including the Academy Awards.

In 2006, Eastwood began to work with Steven Spielberg. They later came up with two films depicting World War II, ‘Flags of the Fathers’ and its sequel ‘letters from Iwo Jima’. Both of the films were well received by the audience.

Two years later, Eastwood starred in the film ‘Gran Torino’. The film was a big success at the box office, grossing over $268 million in theatres worldwide.

In 2010, the film ‘Hereafter’ was released, and the following year, he released a biopic of FBI director J. Edgar Hoover, which starred Leonardo DiCaprio.

As of February 2023, Clint Eastwood’s net worth is estimated to be roughly $375 Million.

How Does Clint Eastwood Spend His Money?

Eastwood has a house in Los Angeles that cost $30 million. He also owns a ranch in California.

The legendary actor owns a lot of pets as well, which can cost a lot of money to provide for.

Here are some of the best highlights of Clint Eastwood’s career:

“There’s a rebel lying deep in my soul. Anytime anybody tells me the trend is such and such, I go the opposite direction. I hate the idea of trends.” – Clint Eastwood

“Extremism is so easy. You’ve got your position, and that’s it. It doesn’t take much thought. And when you go far enough to the right you meet the same idiots coming around from the left.” – Clint Eastwood

“Maybe I’m getting to the age when I’m starting to be senile or nostalgic or both, but people are so angry now. You used to be able to disagree with people and still be friends. Now you hear these talk shows, and everyone who believes differently from you is a moron and an idiot – both on the Right and the Left.” – Clint Eastwood

“If a person is confident enough in the way they feel, whether it’s an art form or whether it’s just in life, it comes off – you don’t have anything to prove; you can just be who you are.” – Clint Eastwood

“Listen, punk. To me, you’re nothin’ but dogs**t, you understand? And a lot of things can happen to dogs**t. It can be scraped up with a shovel off the ground. It can dry up and blow away in the wind. Or it can be stepped on and squashed. So take my advice and be careful where the dog s**ts ya!” – Clint Eastwood

“I had three points I wanted to make: That not everybody in Hollywood is on the left, that Obama has broken a lot of the promises he made when he took office, and that the people should feel free to get rid of any politician who’s not doing a good job. But I didn’t make up my mind exactly what I was going to say until I said it.” – Clint Eastwood

View our larger collection of the best Clint Eastwood quotes!

Now that you know all about Clint Eastwood’s net worth, and how he achieved success; let’s take a look at some of the lessons we can learn from him.

Understanding an organization’s strengths and weaknesses it essential to success. It’s that understanding that enables a leader to dream big, set the bar high and inspire their people to work hard to make it happen.

Don’t be afraid to lead. Regardless of those leaders that may have come before you, it’s your time to shine. Take the opportunity to set direction and manage change.

A leader that sets the tone for an enterprise. Your people are watching you. If you operate with the goodwill and demonstrate a willingness to “pitch in” and help those that need help in your business, then your people will recognize that this is a value worth mirroring.

How much is Clint Eastwood worth?

Clint Eastwood’s net worth is estimated to be $375 Million.

How old is Clint Eastwood?

How tall is Clint Eastwood?

From being born in a middle-class family of workers to being the reigning actor-director-producer of Hollywood, Clint Eastwood has had a dreamy uphill career.

Eastwood is an incredibly good actor and director, and he has collaborated with some of the best directors, actors, and producers in the film industry.

As of February 2023, Clint Eastwood’s net worth is estimated to be roughly $375 Million dollars.

What do you think about Clint Eastwood’s net worth? Leave a comment below.