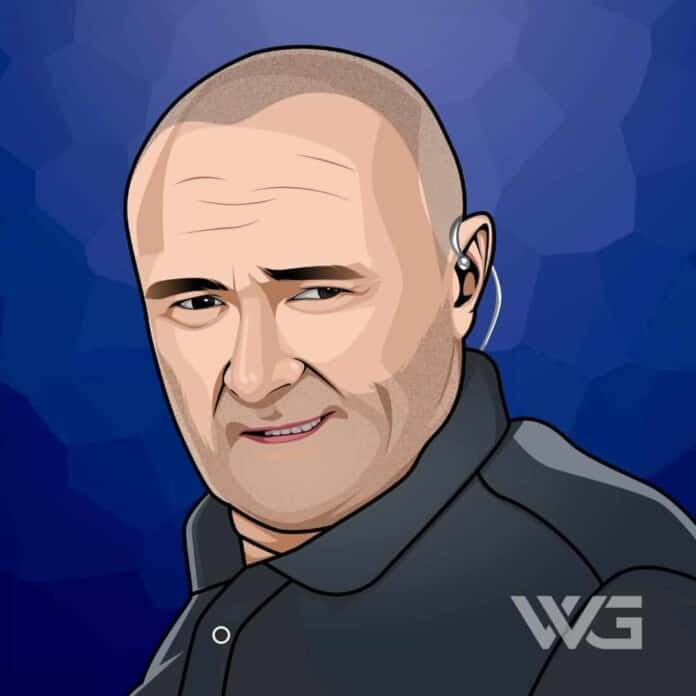 What is Phil Collins’ net worth?

As of November 2022, Phil Collins’ net worth is estimated to be roughly $300 Million.

He was the drummer and later became the singer of the rock band Genesis, and is also a solo artist. Collins has sold more than 100 million albums worldwide.

Philip David Charles Collins was born on the 30th of January, 1951, in Chiswick, London, England.

His father, Greville Philip Austin Collins, was an insurance agent, while his mother, Winifred June Strange, was a theatrical agent.

While his father worked a mundane job, it was his mother’s job that interested Phil, as a kid. He would accompany her to the theaters and watch actors perform on stage.

Collins began acting as a child, and his mother’s contacts with the talent agencies helped him in bagging his initial roles in theatrical productions.

He played a few small roles in ‘Calamity the Cow’ and ‘A Hard Day’s Night,’ but somewhere deep down, acting did not satisfy him.

In the mid-70s, the rock band ‘Genesis’ posted an advertisement for the requirement of a drummer, and Collins became the band’s new drummer in August 1970, after an audition. For the next five years, Collins toured with the band and played drums and percussions in their albums.

His first solo album, ‘Face Value,’ was released in 1981 and featured a different style of music, which was more inclined towards funk and faster beats. The album became an international success, topping the charts in seven countries.

In 2006, Collins reunited with two former ‘Genesis’ members and embarked on a tour called ‘Turn It on Again: The Tour,’ which was a success.

In March 2010, Collins was honored with a place in the ‘Rock and Roll Hall of Fame,’ and in 2011, he announced his retirement for a short time.

Here are some of the best highlights of Phil Collins’ career:

“I know it shouldn’t make a difference, but crossing the dateline, we weren’t sure what day it was – it was very strange. Now, I seem to cope with it better.” – Phil Collins

“I usually hang around the room listening to a bit of last night’s show. If there’s one available, I go to the steam room every day for my voice. I spend half an hour there and then I eat because I can’t eat later than four o’clock. Then I go for a soundcheck. That’s my day.” – Phil Collins

“Everything has added up to a load that I’m getting tired of carrying. It’s gotten so complicated. It’s the three failed marriages and having kids that grew up without me, and it’s the personal criticism, of being Mr. Nice Guy, or of divorcing my wife by fax, all that stuff, the journalism, some of which I find insulting.” – Phil Collins

“Each thing leapfrogs. I do a Genesis project – like now, we’re just finishing off an album – and then by the time the album is doing its thing, I could do nothing or I could do a film.” – Phil Collins

“When we’re touring America or Europe, we use our own plane and a great advantage of that is it cuts out an awful lot of time checking in. You literally drive up to the plane, get on and then drive off at the other end.” – Phil Collins

Now that you know all about Phil Collins’ net worth, and how he achieved success; let’s take a look at some of the lessons we can learn from him:

Phil got a drum set when he was just a young kid.

Collins fell in love and worked and worked while his fingers bled and bled. He loved it and it didn’t work for him. He knew he wanted to drum.

So we’re talking about years and years of putting in the time and during his late teen years Phil was getting a little frustrated. He had been in bands, but he wasn’t really getting his breakthrough. Collins was frustrated, but he never really entertained the idea of quitting.

He was going to figure it out. Don’t give up. Why would you? What’s the worst that could happen?

The key here is that doing new things or even things we think we do well can make us nervous. Everybody gets nervous. No matter how nervous you are inside the people watching you really can’t tell. They really can’t.

3. Change Is Part Of Life

Phil Collins went through a lot of change in his life. Just as Genesis was starting to find momentum their lead singer left. Then another member left.

So they quickly went from five to three just as they were finally starting to break. But then once it was just three they found more success than they ever had. They seemed to embrace the change. They knew that it was part of life and they focused on what they could control and they made the best of it.

Not everybody embraces change. But those that do usually find big opportunities.

How much is Phil Collins worth?

Phil Collins’ net worth is estimated to be $300 Million.

How old is Phil Collins?

How tall is Phil Collins?

Phil Collins is an English musician, drummer, singer, and actor, who is one of the very few artists who have proved their worth in both group and solo music endeavors.

Collins is certainly one of the best-selling artists of this generation.

During his illustrious career, he has been showered with multiple awards, which include six ‘Brit Awards,’ seven ‘Grammy Awards,’ two ‘Golden Globe Awards,’ and one ‘Academy Award’.

As of November 2022, Phil Collins’ net worth is estimated to be roughly $300 Million.

What do you think about Phil Collins’ net worth? Leave a comment below.