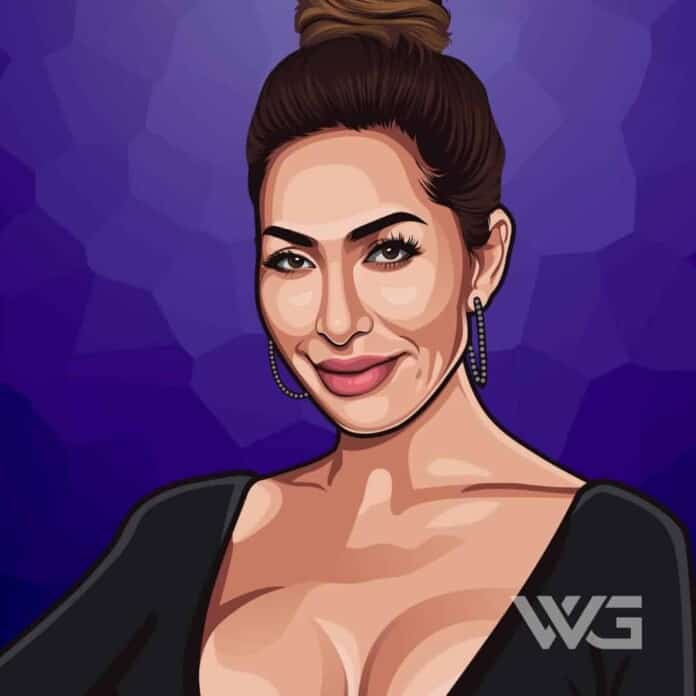 What is Farrah Abraham’s net worth?

Abraham received public attention when she starred in the reality television series ’16 and Pregnant’ in 2009. The same year, she was cast in the spin-off series ‘Teen Mom’ and appeared one each of its four seasons.

She released her debut studio album and first memoir in 2012.

As of November 2022, Farrah Abraham’s net worth is estimated to be roughly $1 Million.

Abraham was raised in Iowa, and her father, Michael Abraham is of Syrian and Italian descent. Her mother is of Danish and Sicilian ancestry. Her parents are divorced, and she has a stepfather.

Abraham was 17 years old when she was cast on the MTV show ’16 and Pregnant’ in 2008. The series aimed to document the lives of pregnant teenagers.

In 2008, Abraham appeared on the MTV show ’16 and Pregnant’. Later that year, she also was cast in the series ‘Teen Mom’. The series premiere was broadcast in 2009.

In 2012, she first ventured into the music industry, and she released her debut studio album ‘My Teenage Dream Ended’. The same month she dropped a memoir with the same title. In 2014, she released the single ‘Blowin’.

Abraham and her mother had an unstable relationship throughout ‘Teen Mom’. In 2015, she appeared in the 16th season of the British television series ‘Celebrity Big Brother’. Later that year she became the fifth housemate to be evicted. She spent a total of 23 days in the house.

In 2015, Abragam appeared as a panelist on ‘Celebrity Big Brother .’ She got into a heated argument with fellow panelist Aisleyne Horgan-Wallace.

How Does Farrah Abraham Spend Her Money?

Farrah Abraham has made a name for herself in the reality television industry. She has starred in many shows throughout her career and gained a massive fortune that she likes to spend on cars and lavish vacations.

Abraham has an amazing car collection. Some of her notable cars include a Mercedes-Benz E63 AMG Sedan and a Maserati Ghibli.

Abraham has been seen multiple times living the dream and going to lavish destinations. She has made visits to Dubai and the Bahamas with her daughter. One summer, she was seen on a luxurious yacht exploring the Persian Gulf.

Here are some of the best highlights of Farrah Abraham’s career:

“It is incredible how important doctors are to our society and how they help individuals live up to their full potential in life. Hope to inspire and help others fulfill their best selves as I do my best to become the top doctor in the nation in my future.” – Farrah Abraham

“Can’t speak for everyone, but I know that I definitely don’t want to be a consistent plastic surgery, cosmetic kind of scenario. I don’t like going to the hospital. Don’t want to put myself through the pain. know what I need, and then I call it a day.” – Farrah Abraham

“I get better treatment because I’m a hardworking business mogul and amazing mother who holds herself with respect and keeps production accountable and always goes above and beyond what is asked. And I stay above the trash they have on the show. Sadly, the girls are not taken seriously because of how they conduct themselves, and they’re to blame, not me.” – Farrah on her obvious superiority.” – Farrah Abraham

“I know that sounds kind of odd, but the reason I say that this is we all started together. We kicked off the franchise. It was about us, right? And so we became a family, and we would always have holidays together because that’s the way the network was going at that time. So I do miss everybody. I miss the girls. I miss the kids and I miss the producers too.” – Farrah Abraham

“I’m going to put this in terms that are probably hilarious.  I think we need to have a Vulcan mind-meld to get things going here. It’s like we can’t get people to see eye to eye, and … there are good people on each side.” – Farrah Abraham

Now that you know all about Farrah Abraham’s net worth, and how she achieved success; let’s take a look at some of the lessons we can learn from her:

1. There are More Important Things Than Looks

There are bigger things to worry about than makeup. The inside is what matters, and looks are just looks.

Women should have equal rights to men every day. There is no doubt that women deserve to be treated the same as men.

Some people don’t have the right surroundings to help get them through an experimental time or a tough time.

How much is Farrah Abraham worth?

Farrah Abraham’s net worth is estimated to be $1 Million.

How old is Farrah Abraham?

How tall is Farrah Abraham?

Farrah Abraham is an American reality television personality best known for starring in the MTV reality series ’16 and Pregnant’.

She became a main cast in the follow-up reality TV series ‘Teen Mom’. She has also appeared on the show ‘Couples Therapy,’ and she considered singing as her hobby.

Abraham has released a studio album and a music video. She is also very passionate about cooking, and she is also known for her hot pepper sauce ‘Mom & Me’.

As of November 2022, Farrah Abraham’s net worth is estimated to be roughly $1 Million.

What do you think about Farrah Abraham’s net worth? Leave a comment below.