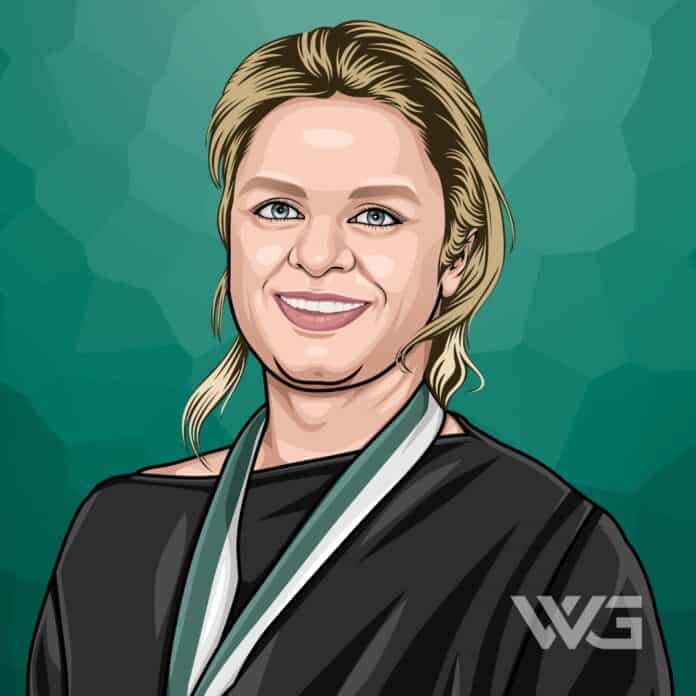 What is Kim Clijsters’ net worth?

The star tennis player, Kim Clijsters, once held the top ranking in both singles and doubles tennis. She is well known for her all-court defense, as well as her capacity to wear down her adversaries with speed and agility.

She started winning tennis competitions when she was just 11 years old and developed into a skilled junior player, placing second in the 1998 Wimbledon Junior competition.

She also ranked 11th in the year-end singles rankings while she and Jelena Doki shared the French Open championship that year.

As of February 2023, Kim Clijsters’ net worth is estimated to be $20 Million.

She grew up with her younger sister Elke and her parents, Els Vandecaetsbeek and Lei Clijsters, who were also renowned athletes.

Els, her mother, was a national artistic gymnastics champion of Belgium. Lei, her father, was a defender who played professionally for several teams in Belgium’s top football division. He was a member of the KV Mechelen squad that won the UEFA Cup in 1988.

After her father won the 1988 Gouden Schoen, which is presented to the player of the year in the Belgian First Division, he built a clay tennis court. It was his gift to his daughter when she turned five years old.

Earlier that year, when her parents were away, Clijsters took a tennis lesson with her cousins and her uncle and started practicing the sport.

Clijsters began playing tennis professionally in 1999, winning her maiden WTA title at the Fortis Championships in Luxembourg in September of that same year.

Kim finally defeated Martina Hingis in her fourth match against the top-ranked player in the world, in the 2001 Indian Wells Open.

For the first time, she then made it to a Tier I final but lost to Serena Williams in the final in three sets after taking the first set.

Clijsters continued to rank in the top 10 despite having a severe shoulder problem in the first half of 2002.

In 2003, Kim defeated Serena Williams in straight sets at the WTA Tour Championships in Los Angeles, after defeating Venus Williams at the WTA Hamburg tournament in Germany.

Before her retirement in 2007, she participated in seven WTA finals, winning her third championship at Stanford and her second in Sydney.

Clijsters declared her retirement following the 2007 season, but returned to the US Open in 2009 and defeated Caroline Wozniacki to claim the title.

Kim kept on competing, but she was picky about the competitions she entered, consequently winning five titles in 2010, including triumphs in Brisbane, Miami, and Cincinnati.

In 2011, Clijsters beat Agnieszka Radwanska in the quarter-finals at Wimbledon, finishing the match in straight sets 6-3 and 7-6.

She also won the WTA Tour Championships and the US Open for the third time in her career.

Golazo Sports, a Belgian corporation, was Clijsters’ agent and arranged that she wear FILA gear and played with Babolat Pure Drive mode racquets.

Fila, Babolat, EY, Kim Clijsters Sport and Health Club, Inner Me, SOS Children’s Villages, and TEN4KIM are some of her current sponsors.

She became the first person to win 3 tournaments without having won a Grand Slam singles championship, an honor she would later earn in 2005.

Over the course of her career, she earned more than $25 million in prize money and as much again in endorsements and sponsorship.

Clijsters is a four-time Grand Slam champion who took two career breaks to retire in 2007 and then again in 2012.

She made her competitive comeback in February 2020 but failed to win any of her matches before needing knee surgery in October of that same year.

Clijsters has now officially retired as of 2022, but given her track record, we may yet see her playing again in the future.

Kim Clijsters’ net worth in 2022 is estimated to be $22 Million, which includes income earned from winnings and her various sponsorship deals.

Over the course of her career, Kim has won an astounding $24.5 million and is in 12th place in the world’s all-time rankings.

Kim beat both Venus Williams and Serena Williams at the 2009 US Open and the 2002 WTA Championships. She ultimately prevailed in both of those competitions, winning easily in her final matches.

Apart from her match takings, Kim has secured sponsorship from Babolat’s Pure Drive mode racquets and she’s worn FILA tennis gear for many years. She has also endorsed the Belgian telecommunications company Telenet, and is associated with Adecco,  the world’s second largest human resources provider and temporary staffing firm.

Kim has also forged a relationship with the Thomas Cook Group which is perfect given her worldwide travel requirements when on the circuit.

Clijsters wed former player and American basketball coach Brian Lynch when he was visiting her country.

Lynch was contracted to Villanova for his NCAA basketball career before deciding to play professionally in Europe. The two met while Lynch was a member of Clijsters’ hometown team, Euphony Bree, and first bonded over their love of bulldogs.

The family alternates between their residences in Bree and New Jersey.

Clijsters has also played a massive role in helping the future stars of tennis succeed and follow in her footsteps. She’s done this by being active in various charities that support kids.

Since 2010, she has represented SOS Children’s Villages in Belgium, which assists poor families and youngsters without parents.

In 2005, she competed in nine finals and won all of them, including the US Open, where she defeated Mary Pierce to win her first Grand Slam singles title.

Here are some of the more memorable moments from Kim Clijsters’ career:

Kim Clijsters’ list of awards and recognition is long, with her achievements of making a comeback in both 2005 and 2009 ranking amongst the most impressive.

From being the Newcomer of the Year to becoming Player of the Year, 5 years later, Kim has always been hard at work, perfecting her game.

How Does Kim Clijsters Spend Her Money?

Kim lives quite a modest life, which means none of the most expensive cars in the world in her driveway or luxurious mansions to live in.

She owns a house in Wall Township, New Jersey, where she lives happily with her family and also owns a modest Porsche Boxster.

Kim spends a lot of her time on charity work and selflessly gives her time and money to worthy causes around the world.

Clijsters has given generously to charity throughout the course of her illustrious career. She founded TEN4KIM, a non-profit group that provides financial assistance to young tennis players.

Kim Clijsters’s amazing career has been recognized by her inclusion in the Tennis Hall of Fame.

To memorialize the event, she donated some of her kit to the tennis museum.

Here are some of the best highlights of Kim Clijsters’ career:

After spending seven years away from the tennis circuit, Kim decided to make a comeback at the 2020 Dubai Tennis Championships.

However, after a few lackluster performances, she had to undergo knee surgery, which prevented her from participating in any further tournaments in 2020.

She tried to return to tennis in 2021, but between the pandemic and her knee problems, she only managed to play in a handful of tournaments. In early 2022, Kim announced that she would be retiring from tennis once again. to focus more on her family.

Kim Clijsters has always been quietly confident about her skills, not needing to make outlandish claims to intimidate her opponents.

She played tennis for the love of the game and money wasn’t her main motivation.

Here are our favorite quotes from Kim Clijsters:

Kim Clijsters has always worked hard to stay on top and things were not always easy for her, especially when she suffered injuries.

But she never gave up hope, preferring to get back on the court, even if it meant she would suffer a few defeats before getting back in form.

Now that you know all about Kim Clijsters’ net worth, here are some of the best success lessons to learn from Kim Clijsters:

Kim always worked hard to prepare for each tournament, making sure that she was at her best.

This resulted in her being able to play consistently throughout her career against some of the richest players in the world, making the most of her chances.

Despite suffering some serious injuries, Kim was always upbeat about her chances.

Sometimes it was tough for her to stay motivated, especially when the rehabilitation was taking longer than she wanted, but she always knuckled down and got it done.

The overriding impression that Kim gave was of someone humble about her tennis ability.

She went out of her way to be down-to-earth and was always grateful for the opportunities that tennis gave her.

Kim Clijsters showed a great attitude and work ethic throughout her career while remaining humble and unassuming.

Her tennis wins ensured that she secured large endorsements and various tennis suppliers were constantly trying to get her to represent them.

However, she was careful about whom she was associated with, and between her competition winnings and her sponsorships, amassed a sizeable fortune.

As of February 2023, Kim Clijsters’ net worth is estimated to be $20 Million.

What do you think about Kim Clijsters’ net worth? Leave a comment below.

Monica Seles is a retired former world No. 1 tennis player who earned her fortune by winning nine Grand Slam titles.