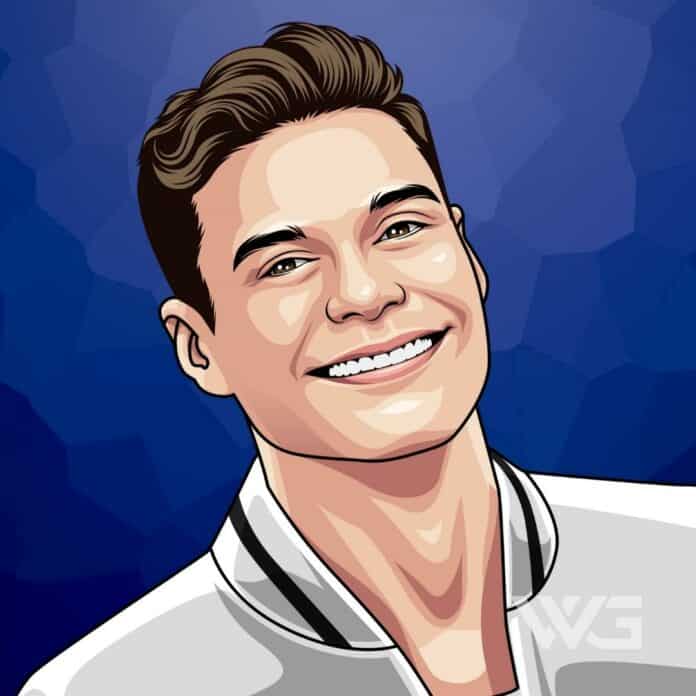 What is Ryan Seacrest’s net worth?

As of December 2022, Ryan Seacrest’s net worth is approximately $450 Million, making him one of the richest TV-hosts in the world.

Ryan John Seacrest is an American television host, radio personality, and producer from Atlanta. Seacrest initially gained recognition when he began as a host on the TV shows ‘American Idol’ and ‘American Top 40’. He began co-hosting ‘Live with Kelly and Ryan’ in 2017.

Ryan John Seacrest was born in Atlanta, Georgia on the 24th of December, 1974. He is the son of Gary Lee Seacrest and Constance Marie. At the age of 14, Seacrest attended Dunwoody High School and won an internship two years later.

Seacrest left the university at the age of 19 and moved to Hollywood to pursue his broadcasting career. He was awarded an honorary Doctor of Humane in 2016.

Ryan Seacrest began his early career as the host for the kid’s game show ‘Gladiator 2000′. In 1997 he hosted another kids’ show ‘Click’.

The new millennium brought with it new opportunities for him as he played the host of NBC ‘Saturday Night at the Movies’. The following year he served as the host for the NBC Saturday morning television block.

In 2001 Seacrest served as the host of a reality show ‘Ultimate Revenge’ where he played practical jokes on friends and family which their own relatives and friends. The show was aired on TNN for two years until 2003.

His big breakthrough came when he became a host for the singing show ‘American Idol’ which became a major hit. Seacrest gained national prominence and earned himself a celebrity status.

The increasing popularity of ‘American Idol’ earned him world recognition and he became famous worldwide.

Seacrest’s entry into American radio started when he was the new host of the radio program ‘American Top 40’. The show was syndicated by Premiere Radio Networks and the same year the show was known as ‘On Air With Ryan Seacrest’.

In 2005 Seacrest realized his lifelong dream as he gained the chair of the executive producer and served as the host of ABC’s Dick Clark’s ‘New Year’s Rockin’ Eve’. The following year he signed a three-year deal with US Cable channel E! for $21 million to produce and host.

His productions RSP produces the hit series ‘Keeping Up With The Kardashians’ and the spin-offs ‘Kourtney and Kim Take New York’ and ‘Kourtney and Khloe Take Miami’.

Here are some of the best highlights of Ryan Seacrest’s career:

“I’ve dated some women who have turned me on to some funny things that are strange for men to actually do. But these things have become part of my process. I think the things I do for my appearance help make me look better. I even color my hair because I like how it makes me look.” – Ryan Seacrest

“A friend of mine has a house with a basketball court and a pool. The guys go over and play basketball; I lie by the pool and nap in the sun. That defines me. That’s consistent with who I am. I don’t pretend to play basketball because I wanna feel like one of the guys. I wanna lie in the sun and relax.” – Ryan Seacrest

“My parents would always have us, as many times as we could, sit together for dinner and talk about what was happening in our lives, and so we created a great recipe where I could be completely honest with my mother and to an extent my father, being an attorney.” – Ryan Seacrest

“All I wanted to do when I was a teenager was getting dropped off at a radio station – one of the ones I listened to – and watch how the shows worked. After a point it was about showing up and driving people crazy, driving the van to promotions and sneaking on the air.” – Ryan Seacrest

“And I think more than anything else, I know when I go to bed that no one’s working harder doing what I’m doing, and I think, quite frankly, simply that hard work at some point was gonna pay off.” – Ryan Seacrest

How much is Ryan Seacrest worth?

Ryan Seacrest’s net worth is estimated to be $450 Million.

How old is Ryan Seacrest?

How tall is Ryan Seacrest?

Ryan Seacrest is probably best known as the host of American Top 40. He is a very successful TV host and has worked with some of the most trending celebrities in the world.

As of December 2022, Ryan Seacrest’s net worth is approximately $450 Million.

What do you think about Ryan Seacrest’s net worth? Leave a comment below.