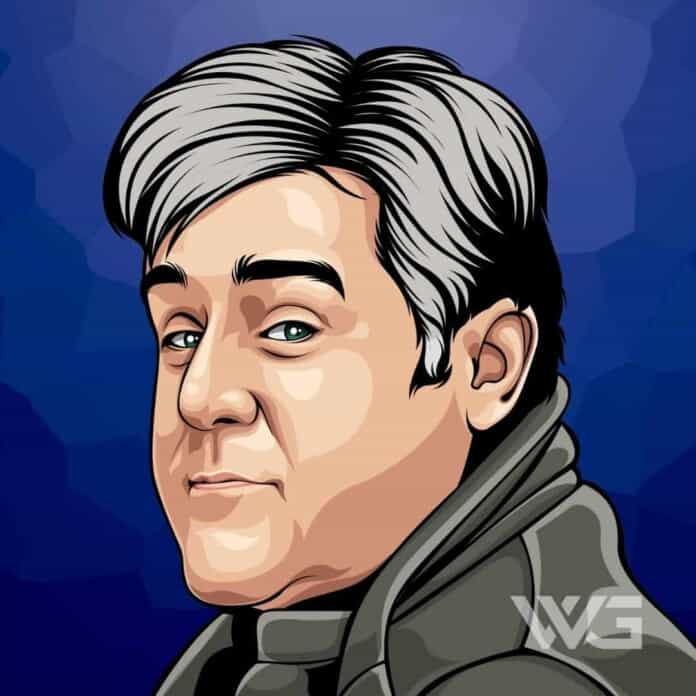 What is Jay Leno’s net worth?

James Douglas Muir Leno is an American actor, comedian and television host from New York. He initially gained recognition when he had his debut on The Tonight Show in 1977, where he performed a comedy routine.

Jay Leno was born in New Rochelle, New York on the 28th of April, 1950. His father, Angelo, was a salesman who was also born in New York. His mother came to New York at the age of 11, and is was born in Greenock in Scotland.

Leno grew up in Andover, Massachusetts. He graduated from Andover High School where he received a bachelor’s degree in speech therapy.

In his early career in 1977, Leno made his first comedy show debut on The Tonight Show. During the 70’s he appeared in several films and television series.

He was in the debut episode of the TV show “J.J In Trouble” of Good Times, and also in an episode of Holmes & Yo-Yo. After his successful performance in the movie Fun With Dick & Jane (1977), he got several gigs as an actor.

During the Writers Guild of America Strike in 2007 Leno was accused of violating WGA guidelines by writing his own script for The Tonight Show.

He went to trial in 2009, and when WGA published the list of strikebreakers, Leno was not on the list. Currently is known for being one of the busiest performers in comedy.

Leno has collaborated with some of the best TV-hosts and comedians during his career, including the likes of David Letterman, Barack Obama, and Jimmy Fallon, and more.

He is one of the best performers in comedy and books over 300 appearances annually. He is also famous for observational clean humor, and a cartoon-like facial feature, in which he made reference to in one of his biographies in 1996.

Here are some of the best highlights of Jay Leno’s career:

“For the first time ever, overweight people outnumber average people in America. Doesn’t that make overweight the average then? Last month you were fat, now you’re average – hey, let’s get a pizza!” – Jay Leno

“With hurricanes, tornados, fires out of control, mud slides, flooding, severe thunderstorms tearing up the country from one end to another, and with the threat of bird flu and terrorist attacks, “Are we sure this is a good time to take God out of the Pledge of Allegiance?” – Jay Leno

“Major league baseball has asked its players to stop tossing baseballs into the stands during games because they say fans fight over them and they get hurt. In fact, the Florida Marlins said that’s why they never hit any home runs. It’s a safety issue.” – Jay Leno

“Scientists are complaining that the new Dinosaur movie shows dinosaurs with lemurs, who didn’t evolve for another million years. They’re afraid the movie will give kids a mistaken impression. What about the fact that the dinosaurs are singing and dancing?” – Jay Leno

View our larger collection of the best Jay Leno quotes!

Now that you know all about Jay Leno’s net worth, and how he achieved success; let’s take a look at some of the lessons we can learn from him:

1. Indeed eventually everyone gets screwed

Always be prepared for your exit with enough money squirrelled away. Everyone reaches the end and there will be no point in denying it is coming or not preparing for it.

Why pretend to be something you aren’t? We all are living longer and healthier lives if we act to our ages.

You can’t stay mad at someone who makes you laugh. Don’t waste your time being made, take about the problems and keep those people in your life that can make you smile or laugh.

How much is Jay Leno worth?

Jay Leno’s net worth is estimated to be $450 Million.

How old is Jay Leno?

How tall is Jay Leno?

Leno is known for being the most popular late-night TV host in America for the past 20 years. He is one of the best performers in comedy and is known for his clean observational humor.

What do you think about Jay Leno’s net worth? Leave a comment below.

What is Xavien Howard's net worth? Introduction  As of ,...