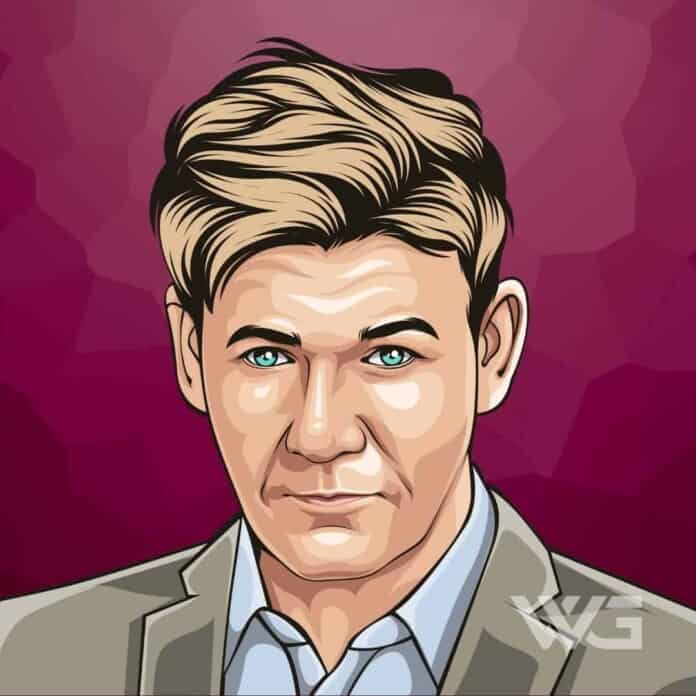 What is Gordon Ramsay’s net worth?

His restaurants have been awarded 16 Michelin stars in total and currently hold a total of 7. First appearing on television in the UK in the late 1990s, by 2004 Ramsay had become one of the best-known and most influential chefs in British popular culture.

Gordon James Ramsay Jr. was born on the 8th of November, 1966, in Renfrewshire, Scotland. He is the son to Gordon and Helen Cosgrove. Ramsay Jr. was raised in Stratford, Warwickshire, England from the age of 5.

His early life was marked by abuse and neglect from his father, a “hard-drinking womanizer”. He played football and was first chosen to play under-14 football at age 12.

Ramsay Jr. became serious about acquiring a culinary qualification at the age of 19. In the early 1980s, he worked at the Wroxton House Hotel and the Wickham Arms. He moved to London, where he worked in a series of restaurants.

Ramsay worked for the temperamental Marco Pierre White at Harvey’s for nearly 3 years and decided to study French Cuisine. On White’s advice, he began working for Albert Roux at Le Gavroche in Mayfair.

He continued in France for three years and benefited from the mentorship of Guy Savoy. He, then, accepted the less stressful work of a personal chef on the private yacht, Idlewild, based in Bermuda.

In 1993, Ramsay returned to London and was offered the head chef position and 10% share in the Rossmore.

Gordon Ramsay went on to establish a successful chain of restaurants not just in England but in Glasgow, Ireland, Dubai, Tokyo, New York City, Florida, and Los Angeles, in the next 15 years.

He appeared on the television series, Faking It, in 2001, helping the prospective chef, a burger flipper named Ed Devlin, learn the trade. This episode won the BAFTA for Best Factual TV Moment.

In 2010, he was a producer and judge on the US version of MasterChef, starred in a travelogue about his visit to India, Gordon’s Great Escape, and hosted the series, Ramsay’s Best Restaurant.

Till 2012, he penned 21 books and contributed articles to The Times Saturday magazine. Two of his books are his autobiographies, Roasting in Hell’s Kitchen and Humble Pie.

Here are some of the best highlights of Gordon Ramsay’s career:

“When you’re a chef, you graze. You never get a chance to sit down and eat. They don’t actually sit down and eat before you cook. So when I finish work, the first thing I’ll do, and especially when I’m in New York, I’ll go for a run. And I’ll run 10 or 15k on me – and I run to gain my appetite.” – Gordon Ramsay

“The pressure on young chefs today is far greater than ever before in terms of social skills, marketing skills, cooking skills, personality and, more importantly, delivering on the plate. So you need to be strong. Physically fit. So my chefs get weighed every time they come into the kitchen.” – Gordon Ramsay

“As a soccer player, I wanted a FA Cup winner’s medal. So pushing yourself to the extreme creates a lot of pressure and a lot of excitement, and more importantly, it shows on the plate.” – Gordon Ramsay

“I train my chefs completely different to anyone else. My young girls and guys, when they come to the kitchen, the first thing they get is a blindfold. They get blindfolded and they get sat down at the chef’s table… Unless they can identify what they’re tasting, they don’t get to cook it.” – Gordon Ramsay

“I still love football, though, and I think cooking is like football. It’s not a job, it’s a passion. When you become good at it, it’s a dream job and financially you need never to worry. Ever.” – Gordon Ramsay

View our larger collection of the best Gordon Ramsay quotes!

Now that you know all about Gordon Ramsay’s net worth, and how he achieved success; let’s take a look at some of the best lessons we can learn from him:

1. Never Let Your Thirst for Knowledge Die Out

You have to be on student-mode all the time. Whatever it is you want to do in life, keep doing it. Keep learning and keep trying new things. Never let your thirst for knowledge die. Tell yourself that it is never enough. However much you think you have learned or had within you, you’re always a student. So don’t get complacent.

Release things that are negative within! Don’t hold it in for too long. There’s nothing worse than feeling all that repressed energy inside of you.

That’s not to say you need to shout or scream whenever you feel like you need to let something out though. Do what suits you. Take a break, breathe, meditate or just talk to someone. Just don’t hold it in until it affects your work.

3. Stay True to Yourself

Gordon Ramsay willingly and proudly says he’s a chef, no matter what. What are you? We attach ourselves too easily to different identities, such as the name of our jobs, until we forget our own roots. That’s how we become unhappy, unmotivated and eventually lost.

How much is Gordon Ramsay worth?

Gordon Ramsay’s net worth is estimated to be $220 Million.

How old is Gordon Ramsay?

How tall is Gordon Ramsay?

Gordon Ramsay is considered to be one of the best chefs in the world. His restaurants currently holding 14 Michelin stars. He has opened a string of successful restaurants across the globe.

Ramsay has also become a star of the small screen both in the UK and internationally. He is also an author of a number of books, many of which have become bestsellers around the world.

What do you think about Gordon Ramsay’s net worth? Leave a comment below.