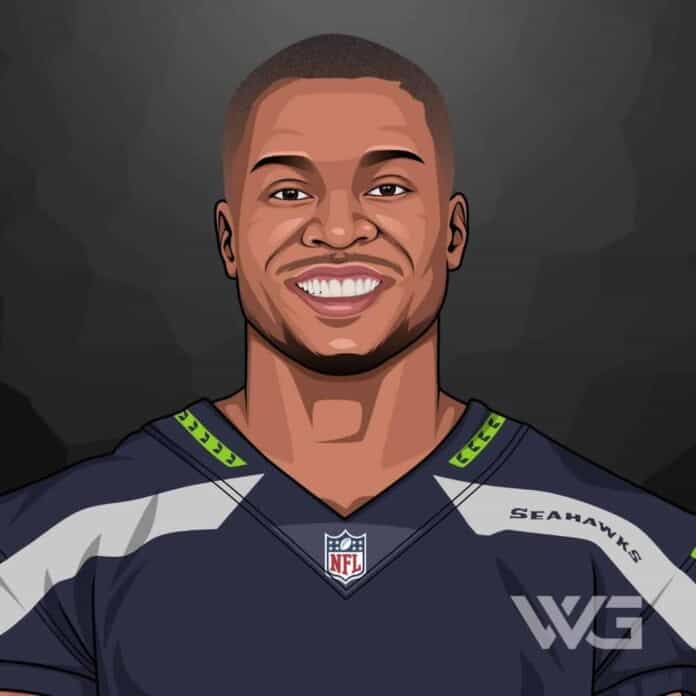 What is Tyler Lockett’s net worth?

He plays for the Seattle Seahawks of the NFL. Lockett was drafted by the Seahawks in the third round of the 2015 NFL Draft. He played college football at Kansas State.

Lockett began his NFL career as NFC Special Teams Player of the Month for September 2015 when he posted both a punt and kickoff return touchdown in his first three games.

As of February 2023, Tyler Lockett’s net worth is estimated to be $11 Million.

Tyler Lockett was born on the 28th of September, 1992, in Tulsa, Oklahoma.

He attended Barnard Elementary, Carver Middle School, and then Booker T. Washington High School in Tulsa, a three-sport star in football, basketball, and track and field.

The Seattle Seahawks selected Lockett in the third round of the 2015 NFL Draft.

In his first NFL appearance, Lockett returned a 103-yard kickoff for a touchdown against the Denver Broncos in Seattle’s preseason opener, marking the first touchdown of the preseason for the team.

Lockett signed a three-year, $31.8 million contract extension with the Seahawks through the 2021 season in 2018. He totaled 12 receptions for 196 receiving yards in the first three games. In addition, he recorded a receiving touchdown in each game.

In week 1 against the Cincinnati Bengals, Lockett only caught 1 pass in the game. However, it was for 44 yards and a fourth-quarter touchdown in the 21–20 win.

As of February 2023, Tyler Lockett’s net worth is estimated to be roughly $11 Million.

How Does Tyler Lockett Spend His Money?

Tyler Lockett spends some of his money on is real estate.

Lockett lives in a beautiful home in Washington.

Here are some of the best highlights of Tyler Lockett’s career:

“I mean, I had an idea…as far as the agent and him representing you…he lets you know a good amount of the teams that said they really liked you. I knew the Jets liked me. The Bucs liked me, the Panthers, Minnesota, Arizona…it was probably more teams, but I knew that Seattle liked me as well just because of Schneider.” – Tyler Lockett

“We went to the crab pot. That was pretty good. I’ve been there about two or three times, maybe. I haven’t gotten on the Ferris Wheel yet…but I want to. It just kind of freaks me out because they told me they have a little window at the bottom, and I was like I don’t need all that right there.” – Tyler Lockett

“I do different things. They got this little board…I call it like a little game in the indoor where you work on your hand and eye coordination. I do that a whole lot. There are days where I go to catch tennis balls. There are other days where I kind of jog through some footwork stuff. I go through some releases.” – Tyler Lockett

Now that you know all about Tyler Lockett’s net worth and how he achieved success; let’s take a look at some of the strongest lessons we can learn from him:

You will never always be motivated. You have to learn to be disciplined.

Believe in yourself! Have faith in your abilities! Without humble but reasonable confidence in your own powers, you cannot be successful or happy.

When you know what you want and want it bad enough, you’ll find a way to get it.

How much is Tyler Lockett worth?

Tyler Lockett’s net worth is estimated to be $11 Million.

How old is Tyler Lockett?

How tall is Tyler Lockett?

Tyler Lockett is an American Football player who the Seahawks first drafted in the 2015 NFL draft as a third-round pick.

Before playing in NFL, he played college-level football for the Kansas State Wildcats football team.

He is the son and nephew of professional football players and was a prominent member of three state high school championship teams – two in football and a third in basketball.

As of February 2023, Tyler Lockett’s net worth is estimated to be roughly $11 Million.

What do you think about Tyler Lockett’s net worth? Leave a comment below.