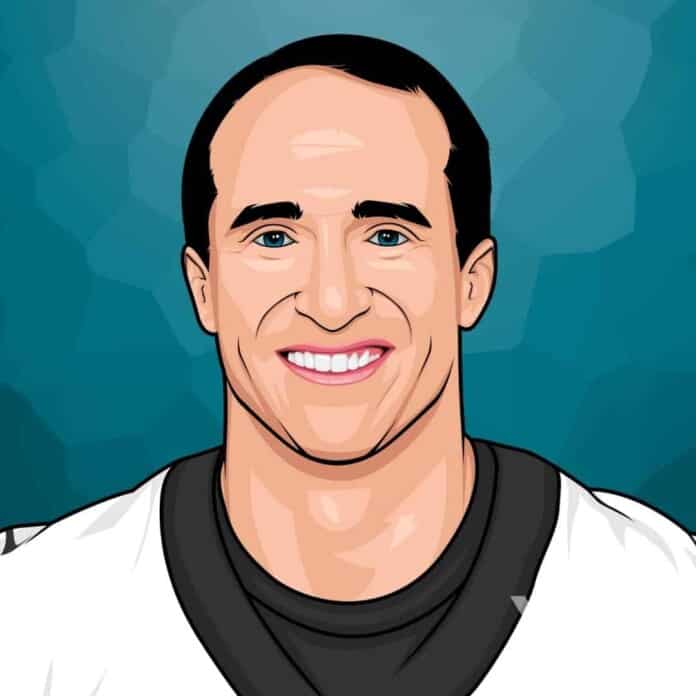 What is Drew Brees’ net worth?

Drew Brees is an American football quarterback for the New Orleans Saints of the NFL.

Brees had a successful college football career at Purdue University, becoming one of the most decorated players in Purdue and Big Ten Conference history.

Drew Christopher Brees was born on the 15th of January, 1979, in Austin, Texas.

Brees is the son to Eugene Wilson Brees and Meena Ruth. Both his parents worked in a law firm; his father was a trial lawyer while his mother was a popular attorney.

His younger brother, Reid, also bore the brunt of a failed marriage. However, the unfortunate situation only brought both brothers closer to one another.

Drew also has a half-sister named Audrey from his father’s second marriage.

Brees began his professional career under ‘San Diego Chargers’ when he was chosen in the 2001 NFL Draft. He played his debut match against Kansas City Chiefs on 4th November 2001.

He began the 2004 season with 15 games and managed to assist his team in acquiring a 12-4 victory. It was after a decade that the team won the ‘AFC West’ tournament and was an obvious choice for the ‘2004 Pro Bowl’.

Even after he was made a free agent he continued to perform consistently. Unfortunately, in 2005 he tore his labrum and had to undergo arthroscopic surgery.

On not receiving a hike in payment from the ‘San Diego Chargers’, Brees turned to other teams and soon joined ‘New Orleans Saints’ signing a contract of six years at sixty million dollars on 14th March 2006.

The first year was quite prolific for the famous quarterback. Even after the team battled with the catastrophe ‘Hurrican Katrina’, they still managed to pull off a victory and claimed the ‘NFC South Division’ title.

In 2015, he made a spectacular 80-yard touchdown pass to C.J. Spiller which helped in winning the match 26-20 against Dallas Cowboys on 4th October. He became the fifth player to earn 400 touchdowns and is now hailed as the fastest player to reach the milestone.

Here are some of the best highlights of Drew Brees’ career:

“And at the time, it is funny how you can look at something and say, for example with my shoulder injury, when it first happened I said this is the worst thing that could happen to me. Why me, why now? Now I look back and say it was probably the best thing that happened to me” – Drew Brees

“A good friend of mine once told me that each morning when you wake up, think about winning the day. Don’t worry about a week from now or a month from now – just think about one day at a time. If you are worried about the mountain in the distance, you might trip over the molehill right in front of you. Win the day!” – Drew Brees

“I obviously take a lot of pride in what I do on the football field because that has the ability to influence a lot of people. That puts smiles on people’s faces. That gives people a pep in their step on Monday morning when they go back to work.” – Drew Brees

“God, I know that if you bring me to it, you will bring me through it. I know you have a plan, but quite honestly I don’t see it right now. But I know it’s there. I know I have to believe. And I do trust you. But it’s hard right now.” – Drew Brees

Now that you know all about Drew Brees net worth, and how he achieved success; let’s take a look at some of the lessons we can learn from him:

1. Make People Believe In You

Sometimes all you need is just for somebody to believe in you in order to be able to accomplish maybe what you never thought you could.

There’s always a little bit of personal satisfaction when you prove somebody wrong.

Each day, you get an ounce more confidence. When we’re playing like we are, there’s no reason not to.

How much is Drew Brees worth?

Drew Brees’ net worth is estimated to be $160 Million.

How old is Drew Brees?

How tall is Drew Brees?

Brees has been awarded several titles including ‘Academic All-American Player of the Year’, NFL’s Comeback Player of 2004’ and has also been crowned ‘Sportsman of the Year’ in 2010 by Sports Illustrated.

What do you think about Drew Brees’ net worth? Leave a comment below.